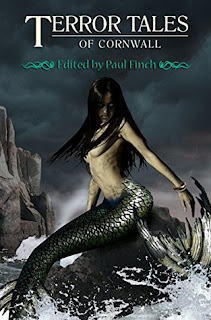 Last week I was completely down with a fever that wouldn't quit. I grabbed a random handful of books off the shelves, grabbed a hot cup of  tea and went to bed.  Not feeling in the mood to prioritize,  Terror Tales of Cornwall was on the top of the stack so it was also the first read.

I'm no stranger to Finch's Terror Tales anthologies and have almost all of them on my shelves.  They all share the insertion of brief snippets of local lore, history, people etc. between each story, while the stories themselves are geographically centered within a particular region.  This time around it's all about Cornwall,


"which would not be Cornwall without its multiplicity of spooky tales, its thousands of ghost stories, its legends of monsters, faeries, demons, witches, smugglers and mermaids"

and to that list I'll add Daphne du Maurier, whose life and work does get a few mentions here.

There is a good mix here of horror, weird, and the strange.  Six of these stories I loved, as they are each brilliant examples of weird fiction,  two made me laugh almost out loud, two reflect current social anxieties, and the remainder I'll file  under NPT -- not particularly terrifying, but okay.


The standouts for me (and this in order of appearance)  begin with "In the Light of St Ives," by Ray Cluley.   There is something quite special about the quality of light in St. Ives, which was ideal for Claire the artist, until she tried to burn down her house and paint herself black after noticing the colors that "seep into everything."  This one absolutely chilled, and the ambiguity here keeps the tension high as the story itself merges into surreal territory.   Very nicely done.  In "Trouble at Botathan," by Reggie Oliver,  one character notes, "... all this has happened before," and in this place, indeed it has.  "Botathan Place" is the home of the Bligh family.  The last of the line, a mathematics Don at St. Saviours, died in 1973 and left the remote house to his college. Now at "The Place" a hand-picked group of young men,  a college Dean and the chaplain of St. Saviour's are having a sort of summer retreat when one student has a strange experience in the wood that turns him in into "a different person."   Sad but strange, and oh so good.  Mark Valentine's "The Uncertainty of All Earthly Things" reveals that "here there are secrets" as a museum curator and his artist friend are allowed a glimpse just over the thin boundary between the "Sancreed we see" and the "Sancreed Beyond."  "His Fire Was Kindled" by Kate Farrell is yet another fine piece of  unsettling weirdness, as commercialism and the spiritual butt heads  in Penharrack.  A representative of  luxury housing developers seriously underestimates the staying power of a local vicar who doesn't care if a new development is a done deal -- the church has been there since the thirteenth century and the vicar aims to keep it there.    "Four Windows and a Door"  by DP Watt is quite possibly the most eerie and chilling story in this collection, in which a glimpse at a strange house during a boat ride begins a terrible odyssey for a family vacationing in Cornwall.  Read it twice -- the impact is staggering.  Last but by no means least comes Mark Samuels' "Moon Blood-Red, Tide Turning."  which unsettled me to my core.  A man travels to an amphitheatre carved into a cliff to watch his friend perform in a play that is "all very ritualistic. But definitely cutting-edge and experimental." As it just so happens, the play runs during a lunar eclipse, after which the viewer leaves while the play goes on.   Twenty years later it seems that although the venue's changed, the show goes on.  I have to confess that I had to look up "Dr. Prozess," resulting in the purchase of a used copy of The Prozess Manifestations. If this story (which is in that book) is any judge, I'll soon be immersed in intense weirdness.


Both "Mebyon versus Suna" by John Whitbourn and "The Old Traditions Are Best" by editor Paul Finch combine a bit of horror with a comic touch.  In the first, a dyed-in-the-wool Cornishman whose wife refuses  to share his "born-again nationalism" just can't shut up about it when his wife gets a promotion and he finds himself living in Exeter.  His neighbor is tolerant as can be until one day when he's not.   Finch's entry is steeped in Padstow local traditions but young Scott, a  tough guy from Manchester whose probation officer  had brought him down on holiday, openly scoffs at them, much to his detriment.

Although they come at the end of this volume, there are two tales which reflect current social concerns and speak mainly in metaphor: "The Memory of Stone," by Sarah Singleton, and "Losing Its Identity" by Thana Niveau.   Singleton's story is focused on Michael, whose obsession with one woman decimates his family. Alone in an old cottage on the Cornish shore, he receives strange nightly visits from a group of children who leave messages in the form of white stones until one day when they arrive in person.   Niveau exams senility and climate change in her story, set in a future where Cornwall is on the verge of being swallowed by the sea. A sad and poignant tale, to be sure.

The remainder fit more along the edge of traditional horror, and in most cases reflect the idea that the legendary, mythical creatures of Cornwall may be more real than one might believe.   "We Who Sing Beneath the Ground" by Mark Morris which opens the collection,  begins when a rather shy child brings something strange to show and tell day at school.  The next day he doesn't return, and his teacher goes to find out why.  In "The Unseen" by Paul Edwards, an unemployed man watches a dvd from a local shop and becomes fascinated.  Going online to see if anyone else has seen it, wondering if there's an uncut version, he is told that there is a more complete version, and also learns that it's the film itself which will seek out "worthy" watchers.  In Jacqueline Simpson's "Dragon Path" a young man skilled in Druidic arts learns the hard way that  power does not equate to wisdom.  A dirty, dated and hardly-thriving amusement arcade filled with "nightmarish nostalgia" is the location for Steve Jordan's "Claws."  It's also a place where very strange things are happening and the boss thinks the employees are out to get him, but boy is he wrong. Adrian Cole's "A Beast By Any Other Name" begins as a murder mystery, morphing slowly into something not completely of this world.   It's also the most original within this group of stories, and if you ask me, very nicely done. Finally, "Shelter from the Storm," by Ian Hunter finds three friends on a routine "practice walk" before tackling a bigger, 150-mile hike.  Hoping to find their way to Port Isaac, their walk becomes anything but routine when they discover they're lost and the weather turns terrible.  They find what one of them believes is "salvation" when they come across the ruins of an old church, yet fail to heed the warning left there and, as kids often do in these sorts of things,  start messing around with things that are best left alone.

Depending on personal tastes, of course, mileage may vary, not uncommon in any anthology. I trend much more toward the weird, and my selection of favorite stories here reflect my preference, but really there's something here for everyone.  I have enjoyed the series so far, and look forward to reading more in the future.