The Architect, by Brendan Connell 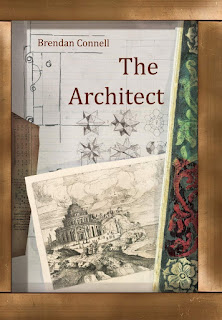 "And so it is that the more desperate men become, the more wild are their dreams. Shunning the world around them, ignoring the blue skies and singing streams, they look for beauty in some great beyond, their diseased minds crippled by stupidity, their senses perverted by occult mechanisms."


When asked by Jeff VanderMeer in in a May 2011 interview what the term "weird" meant to him, author Brendan Connell replied that


" 'the weird' means something different. Not necessarily some creature dug up in the back yard with sunflower seeds for teeth, but rather a perception that is different from normal.  It is like seeing the world reflected on the back of a spoon or hearing a conversation through a thick wall."

The last sentence there pretty much sums up my feelings about  weird fiction.  I know I'm going to be delving into someone's vision of a distorted or dislocated segment of reality, and I look forward to it.   The catch is that it takes a really good writer to  pull it off in a truly satisfying way, and there are a handful of contemporary writers I trust to do it right.  Brendan Connell is definitely one of those authors, with a top tier placement in my imaginary hierarchy of writers of the weird and the strange for some time now.   And while in 2012, the year of its original publication, I'd probably never even heard of The Architect, much less Brendan Connell (I'm a late bloomer -- what can I say?)  Eibonvale has now published its own edition of this book, and I just couldn't resist.  The original blurb for this book refers to it as a "Greek tragedy on hallucinogens."  I couldn't wait to read it and discover for myself whether or not that description was accurate, and by golly, it was.  I normally don't believe blurbers, but yes indeedy, whoever cobbled that phrase together was absolutely on the money.

To more fully understand events of this book, we have to go back in time a bit, to a certain Dr. Maxwell Körn (1849-1924), who had during his lifetime, among other things,  received "certain occult initiations pertaining to the Order of the Hermetic Brotherhood,"  "lunched with swamis and drank tea with Taoist sages,"  and had "entered a secret society of adepts where he studied the anatomy of the soul."   But it was on the third of April, 1894 at 6:30 p.m,  an hour after eating a plate of roast beef and while sitting at platform number 3 of the Lehrter Bahnhof in Berlin that within twenty minutes he'd become "spontaneously enlightened,"  coming to the understanding  "of the entire workings of the entire universe, from its creation to its future destruction and saw both the purpose of mankind and the purpose of its life, the celestial scheme of things." Two years later he decided to form "a Universal Brotherhood of Mankind". He gave lectures throughout Europe,  astro-traveled to "other planets and planes" where among other accomplishments he "met with other beings, familiars looking for and archangels, the souls of great thinkers."  In short, he was a "visionary, spiritual scientist" honored by the modern-day, Switzerland-based Körn society, whose board members as the story opens, are examining plans submitted by various architects for a Meeting Place.  None of the designs meet their approval -- they want a building that reflects the idea of Körn himself, who said in 1914 that


"great architecture transforms the world of material objects into a direct and immutable projection of the spirit."

Unforunately, the plans they've seen to this point have been on the mundane side, not a place worthy of Körn's followers.  Frustrated after having been looking at these things for months and finding nothing worthwhile, a nephew of one of the board members comes in with a book of drawings by a certain Alexius Nachtman, and shortly thereafter he is invited to submit a proposal to the board.   He offers them not only


"the greatest structure built in the post-Atlantean age... a symbol of the liberated spirit, of mankind's final dominance, not only over nature, but over physicality itself"

but speedy delivery.  It takes the Society only thirty minutes to give the go-ahead, and they also offer  Nachtman all the money he will need to complete the project. All he must do is to join the Körn Society, the dues deducted from his otherwise generous salary.

Most importantly for this story, the board members also meet his demand for "full undiluted authority concerning both the architectural and engineering aspects of the project. "  Nachtman has been known to be an eccentric, but with "full undiluted authority,"  his true personality is revealed.  He is the ultimate narcissist, the epitome of unchecked ego, a master manipulator, a man driven by his own obsession and lacking a conscience, but he is also the object of what can only be described as a cult of personality, supported by members of a Society which somewhere along the way "seems to have lost its bearings."  I think in this case,  the author takes the idea of the cult of personality that forms around him to its extreme, yet here logical  conclusion with this tale, which is not at all pretty, but one which doesn't seem to bother anyone except a couple of people who see through what's going on.  Connell  once said that "There are enough monsters and demons in the real world without needing to look elsewhere,"  and in this story it's a toss up as to whether it's the titular architect or his most ardent supporters who reflect this idea to its fullest.  There is, of course, much more, but the joy is in the reading so I will say no more about plot.  The irony will not be lost on any reader.

As dark as it is, there is a streak of black humor that runs through The Architect, making me laugh out loud for more than a beat or two past a split second.  That's not unusual for this author -- some time ago I read and loved his The Translation of Father Torturo and as pitch dark as that one was, god help me, there were times when I absolutely couldn't stop a giggle or two from bubbling out.  At the same time, The Architect left me with a growing sense of uneasiness that I couldn't shake even after it was all over.

Connell's books take on a unique logic which appeals and which works, and frankly, I just love how he writes.  He deserves the honor bestowed on him by author Rhys Hughes, who wrote on the back-cover blurb of  Connell's Unpleasant Tales that


"Every generation throws up few genuine Masters of the Weird. There is simply no hyperbole in the statement that Brendan Connell is a member of this elite group right now, perhaps the most accomplished of them all."

I knew this already, but anyone who reads The Architect could not help but to agree.  A fine novel, certainly recommended to readers of the weird, especially those who have not yet had the great fortune to have made the acquaintance of this author's work.  You will become an instant fan.

My many, many thanks to Alice at Eibonvale for offering me a list of books to read out of which with no hesitation I chose this one, and to David Rix, "a writer, artist and reader who loves books" and who also happens to be the guy who runs Eibonvale.
Posted by NancyO at 3:07 PM