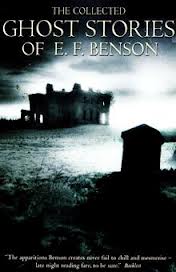 While a few of the stories here failed to make the hairs on the back of my neck stand up straight, and while some were just kind of silly (mostly those dealing with mediums and spiritualism), I found a number of disturbing tales that I really liked and which got a second read:  "The Dust Cloud," which first appeared in 1906 and reflects anxiety about the new technology of motorcars that seem "to possess an independent life" of their own; "The Shootings of Achnaleish" (1906), where modern hunters clash with the traditional beliefs of highlanders in a remote village; "Negotium Perambulans," (1922) set in an isolated village in Cornwall; "Mrs. Amworth," a vampire story; "Reconciliation," and "Expiation,"  both haunted house stories; "The Face," a definite chiller, as is  "The Step," probably one of the creepiest in the entire collection. I also liked "The Temple" for its menacing atmosphere.   The problem with putting together a volume such as this one is that Benson's stories are often formulaic, especially in the ones where a man goes to spend time with a friend at a country house that is the site of strange, ethereal events, but I found that my piecemeal approach helped to break up some of the sameness.  Overall, it is an excellent collection and like most any other anthology, you have some stories that really work for you along with those that don't.  With only a few exceptions, especially in those stories  where evil is manifested in giant, disgusting slugs, the horror in this volume is cerebral, geared to those who prefer to experience the disturbing dread in their minds rather than see it spelled out and splashed out onto the pages.  If you are an avid reader of the old, classic ghost story, you'll definitely want to add this to your reading list.  Benson was a master craftsman of the genre, and deserves to be more widely read.
Posted by NancyO at 10:45 AM 2 comments:


..."suffering comes from the slow but steady sense of loss..."

The quiet tone of these eleven stories is only one thing that belies the disturbing nature of these tales of suffering, loss and people who become "damaged, ruined beyond repair." Normally when I pick up a book of short stories I am expecting the typical anthology where sometimes when I'm lucky, there is a clear thematic structure that binds the narratives together, and I was expecting something along these lines as I started the first page.  I wasn't disappointed; frankly, I was quietly surprised when I started to discover connections between the stories.  It started slowly at first, but as they started popping up more frequently, I stopped reading, went back to the beginning and grabbed a notebook and a pen.  Just as an aside, I can't write in my books -- it's sheer anathema to me and I never even did it while I was in graduate school while reading hundreds of different texts -- that's why post-its were invented.  Anyway, starting over and reading much more carefully, the connections started leaping out at me (noted below in photos) and I was sucked right into this strange world of  this seaside town.

What is also striking about these stories is that each one seems to open rather benignly, inviting you in.  Little by little you start to get used to the environment and maybe for a little while feel comfy where you are. The first story, "Afternoon at the Bakery," for example, begins with a look at a nearly picture perfect scene of families strolling through a square during "an afternoon bathed in light and comfort,"  kids watching a balloon man ply his trade and a woman knitting on a bench. From there the action shifts to a bakery, where "everything looked delicious," with the "sweet scent of vanilla" hanging in the air.  Once you've grown accustomed to your surroundings, however, you realize that something is just a bit off-kilter.  The first hint comes when there's no one at the counter to help the customer/narrator who comes in, even though the friendly woman smelling of "overripe fruit"(!!) who pops in shortly afterward assures the customer that she's sure the girl will be right back.  As the two women start making small talk  it turns out that  the customer is there to buy her son strawberry shortcake for his birthday:

Not only is the boy dead, but he had died twelve years earlier, suffocating in an abandoned refrigerator. Even stranger is what the second woman says to the boy's mother:

"Well,...then it was lucky you chose this bakery. There are no better pastries anywhere; your son will be pleased. And they include a whole box of birthday candles for free. They're darling -- red, blue pink, yellow, some with flowers or butterflies, animals, anything you could want."

The story continues to darken with the mother's memories of the day her son died and how she suffered in the aftermath; and by now you have been jolted out of the comfort of the warm, cozy, vanilla-scented bakery and thrust into a strange and growing darkness.   Even the scene in the square  takes on a surreal tone as the clock strikes five. People gather to watch the little automata come out of the clock door, but what emerges is not what you'd expect: instead it's a parade of a chicken, some soldiers, and a skeleton, followed by an angel who is "beating her golden wings."

I'm not going to go into the other ten stories but the point is that each starts out so normally that you truly can't even begin to imagine what is waiting in store for you as you turn each page. As you read, as each story unfolds, the connections that are found in each and every story only heighten the strangeness --  until the last story brings about quite possibly the strangest tie of all, reminding you that there really is no end to it all.  Suffering and pain,  death and loss are all connected here in this fictional world, just as they are in the real one, but here the author makes the links painfully clear where that's not always possible in reality. She does it in such a way that seemingly normal situations head down a path where these connections all resonate within a bizarre, claustrophobic and eerie atmosphere.

I have to say that I have never in my entire life read anything quite like Revenge, and I probably never will again.  It is truly a masterpiece of darkness and the best advice I can offer is this: run, do not walk to your nearest bookseller to pick up a copy, or get on your computer and order it online.  You definitely do not want to miss this very strange but at the same time magnificent little book.  As it sits right now, it is my favorite book of the year so far.