The Mark of the Shadow Grove, by Ross Smeltzer

With huge apologies to the author, this is one book I should have read a long while ago, and just never got around to.  As the saying goes though, no time like the present, so I carved out late-night time for this one this week.  The book consists of three interconnected and atmospheric stories that in each case take the characters and the reader into the thick woods near Kinderhook, "a retiring town in New York's drowsy upper reaches," which was founded in 1609 under the Dutch.  The stories range in date from 1821 on into the early 1920s.

The "about the author" section reveals that Mr. Smeltzer's imagination was


"apparently corrupted in adolescence by Hawthorne, Bierce, Machen, Lovecraft and other misanthropes, weirdos and purveyors of high strangeness"

and his influences definitely come through in this book.

The Schermerhorn clan has since the oldest times "mediated" the "liminal space" between "invisible hidden things" and the earthly realm, and in 1821, Katrina Schermerhorn continues the family tradition.  Years earlier, when she was young, she was given the name "arendiwanen," translated by some as "witch," but really meaning "one who possesses spirit power." The women of this clan are extremely powerful, and are also very gifted in terms of understanding the secrets of nature; they are also healers.  Katrina, for example, has a reputation among the locals  for being "dangerous" -- she


"knows when it may rain and when a body may die. She can make any garden grow, stimulate seeds in the deadest of soil."

She is also skilled in forbidden knowledge, and in the first story, "The Witch of Kinderhook," it is this knowledge that drives a would-be necromancer named Carver to find her for his own bizarre work. The other two stories continue the story of the powerful Schermerhorn women descended from Katrina; in the next one, "Lord of All High and Hidden Places,"  a certain Professor Hildersham finds an assistant in the form of Alice Schermerhorn, a student who finds her way into one of his courses. His research focuses on the Horned God, who is a major fertility deity.  Alice's task is to locate any old tomes that might have bearing on his research; he, much like Carver before him, has no idea what he's getting into. The third story, "The Role of Old Blood"  features newspaper reporter Jim Scordato, who is currently seeking the whereabouts of a missing wealthy businessman whose last known contact is with an artist we know only as  Ms. Schiaparelli.  When he's not out on a story, the reporter is plagued with dark dreams that he knows ultimately reveal his own destruction.

All three stories are really quite engaging, focusing on the strengths of the women in this clan. The women, in fact, are the strongest characters portrayed here; their power derives from their patroness deity, leading them to grasp onto life that comes out of death and destruction. In all three tales, the belief in reason and science help guide the men to their fate; normally reason and science are good things in  the "realm in which you and I live," but have absolutely no place in a realm of gods and deities, "the cosmos of invisible, hidden things," which the Schermerhorn women seem to understand very well.  I highlight the word seem because of the ending, which I'll leave for other readers to ponder.

Two more things and we're done -- first, there is a lot of obvious Lovecraft influence here (as just two examples, old gods, the skin-covered old tomes and even a mention of  The Necronomicon), but to the author's credit, this is not a pastiche nor is this story explicitly derivative.  The author's definitely put his own spin on things here and he does it well.   I can easily see Machen in here too, which is a good thing. Second, I must confess that I inwardly cringed when I saw the word "ecosystem" being used in the 1820s setting; a bit of research revealed that the term wasn't coined until 1935.  Inner cringe. That seemed to me to be just sloppy.

Actually, this book would also make a fine summer read (it's June tomorrow, and summer reads are on my brain) -- not too heavy, not too dark, but just enough creep factor to keep anyone reading.  It's also very obvious that Mr. Smeltzer can write -- from the outset, it's clear to me that he's employed a literary tone  in this novel that's refreshing to see these days, especially in this genre.  Another fine small press read and I thank the author for bringing it to my attention. It's also fun.
Posted by NancyO at 12:56 PM No comments:

new ghostly gothic: That Which Was So Fair, by Tony Reynolds 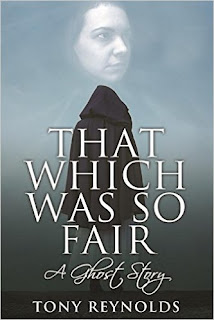 Here it is a day away from June -- I read this book way back in April but time just hasn't really been my friend since the end of March. I'm still catching up on posting about books read back then -- sometimes time is just not my own, but I'm sure everyone has that sort of thing now and then.  Anyway, That Which Was So Fair was brought to my attention by its author, and the storyline seemed intriguing enough to merit buying a copy. In all truth, I was offered an e-copy but I'm a hold-the-book-in-my-hand sort of person so I bought mine.  It's a fun book -- absolutely perfect for a summer read, very short and very to the point while managing to be creepy enough to where a reader won't want to put it down.

The year is 1850, and everything starts when young Catherine leaves her family home to become governess to young Thomas Uttridge.  She is welcomed at Southwell Hall quite warmly by her new employer who is raising Thomas without benefit of a wife,  and soon our young heroine is quite involved with the household and especially with her young charge, and she looks forward to doing a good job.  Aside from the fact that there is no Mrs. Uttridge around, everything seems quite normal.  Soon though, Catherine begins to sense that something is a bit off, and her bizarre experiences (in some cases not shared by others in the same room!) lead her to try to figure out exactly what the heck is actually going on in this place.

That Which Was So Fair is styled as a Victorian ghost story with a very gothic flair, and to his credit, the author lays down atmosphere and a sense of reader unease from the beginning.  There are two ongoing mysteries that run throughout the novel (which I won't disclose) and there's a very nice sense of place and time to be found here.  The ghostly parts of this book are also downright creepy; every sort of off-kilter encounter whetted my appetite for more of the same.  At the same time, I do have to say that as a very well-seasoned, avid reader of mysteries, I figured things out long before the answers presented themselves. Other readers may not notice little things like I did, but it seemed to me that the author tended to give a bit  too much away, where in this case, less would definitely have been more.  Keeping back certain conversations, certain bits of information, etc., would have definitely ratcheted up the level of suspense.  I also think maybe a wee bit of editing would have helped a little in some cases here and there.   However, considering that this book hasn't been out very long, so far readers are loving it, so maybe my too-many-clues-given-away criticism is just uber-pickiness on my end.

This short novel would most definitely make for fine summer-reading material; it's a book anyone could let themselves be carried away by on a hot, sunny afternoon. But do what I did and read it at night -- much creepier that way!
Posted by NancyO at 10:35 AM No comments: