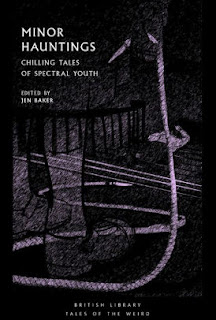 9780712353199
British Library, 2021
317 pp
paperback
On to yet another fine volume in the British Library Tales of the Weird Series, and it's somewhat unique in that the stories all center around the spirits or spectral imprints of dead children.
Jen Baker, the editor who put all of these terrific stories together here in one book,  reveals in her introduction that most of the tales included here

"ask whether children who do not have a good and peaceful death will definitely go to heaven; what the consequences might be if no glory awaits to compensate the child's suffering"

while also asking "what if the child is angry or even vengeful for their treatment in life and the fate to which they have been consigned?"  These stories, as Baker also explains,

"revive, appropriate, and often merge domestic folkloric and literary traditions where the spirit of a wronged child would passively wander and bewail its fate with the darker traditions of non-Anglophone cultures, in which such spirits would terrorise and sometimes kill those who wronged them or even passers-by."

In between each story there are brief "snippets" of other literary works in various forms that "illustrate the sense of historical and cultural debt," all of which may send you on a quest to read the original source material once you've finished reading this book.  At least that happened with me -- I am easily sent down that kind of tangential rabbit hole where I'm happy to linger a while.

I have previously read roughly half of the stories in this book, but even so, revisiting them was not at all a waste of my time.   Two of these are  beyond famous: Elizabeth Gaskell's "The Old Nurse's Story," which I think anyone who is a true ghost-story lover has read more than once as it has been widely anthologized, and M.R. James'  "Lost Hearts," which made its way to the tv screen more than once, first in 1966 and later in 1973 when Robin Chapman adapted it as part of the BBC's "Ghosts at Christmas" series.  I'd read the story long ago, and recently read it again, but I'd only heard about the 1973 adaptation after reading Edward Parnell's excellent Ghostland: In Search of a Haunted Country.
Others falling into my previously-read category are Charlotte Riddell's "Walnut-Tree House,"  Amelia B. Edwards' "Was it an Illusion? A Parson's Story," F. Marion Crawford's  "The Doll's Ghost," "The Lost Ghost" by Mary E. Wilkins Freeman and "The Shadowy Third," by Ellen Glasgow.   Of these, I'm most particularly fond of "The Doll's Ghost," which is sad but creepy enough that it easily could have been made into an episode of the old The Twilight Zone series.
Starting with "The Dead Daughter: A Tale" by Henry Glassford Bell, I struck out into new territory.
According to Baker,  this story influenced Poe's story "Morella;"  Poe scholar T.O. Mabbott  went a bit further saying that the plot of Morella "comes almost entirely" from Bell's story.  "The Dead Daughter" is one of the most morbid and gloomy tales found in this book, and without going into plot, on one hand the surface story centers around rebirth of the soul, but on the other, and more deeply embedded, there is just something darkly off about the relationship between father and daughter that gave me chills more than the main story.    "The Dead Daughter"  can be found in Bell's collection My Old Portfolio; or Tales and Sketches, available via Gutenberg or Google Books, which I've  just picked up.   Moving on, "Kentucky's Ghost," by Elizabeth Stuart Phelps  is a ghostly adventure that takes place on the high seas, beginning with the discovery of a young stowaway.  This boy is in for a terrible experience; as the narrator notes, he'd

"as lief see a son of mine in a Carolina slave-gang as to see him lead the life of a stow-away.  What with the officers from feeling that they've been taken in, and the men, who catch their cue from their superiors, and the spite of the lawful boy who hired in the proper way, he don't have what you may call a tender time."

The boy's treatment is so harsh that one of the crew remarks that "Dead or alive," he will be the one to bring to his tormentor a "summons" to hell.  Mark his words.   "The Ghost of Little Jacques" by Ann M. Hoyt is also rooted in a strange household, but here the story unfolds almost like a whodunit, as a child is murdered and makes his way back to the household to point the finger at his killer.   Unfortunately, the narrator to whom he first appears doesn't understand until much later,  jeopardizing her own future.  Again, much more at work here than an average ghost story but I'll leave that for others to discover.

At this juncture I'm bypassing  one story to get to the final two, "Anne's Little Ghost" by H.D. Everett and Margery Lawrence's "Curse of the Stillborn."    I have to say that evidently I've already read the first but had completely forgotten it, so I'm counting it as (sort of) new.    Narrated by the husband, a  young married couple rent a "half-house" in the country where he is looking forward to fishing time after recuperating in the hospital.   In a strange twist, the ghost of a little girl, coincidentally the same age their daughter would have been had she lived more than "a brief space of only weeks,"  makes her presence known.  Enough said.   Working as both a bit of  exotica and a piece that takes an anti-colonial stance,  "Curse of the Stillborn" takes place in a small settlement in Egypt, where a young Egyptian girl who had come there with her mother gives birth to a stillborn child.  Mrs. Bond, a "well-meaning" missionary and wife of the chaplain who had been there for three years, will not rest until the child is given a proper Christian burial, but the girls's mother will not allow it.  Another man, an Egyptologist named Frith, warns Mrs. Bond to let the women observe their own rites -- he knows exactly what will happen when a "puny might" is pitted "against a great and ancient Force ... thwarted of its right."  And neither last nor least, my favorite story which is beyond horrific:  "Two Little Red Shoes," by a rather obscure writer, Bessie Kyffin-Taylor.  On my shelves here at home is her single collection of supernatural writing, published by Leonaur under the title of The Collected Supernatural and Weird Fiction of Bessie Kyffin-Taylor: From Out of the Silence, which I'll definitely be reading before the end of summer.  As a brief aside, Leonaur is a great publisher for readers of older, obscure works; and they also publish more well-known authors of yesteryear as well. The narrator of  "Two Little Red Shoes"  is a woman who loves to visit and dally in "tenantless houses," who one day finds herself in a place she hadn't yet been to.   While there, she decides she must get inside of the house and  the first room she enters utterly  delights her.  The same can't be said of the next room, but in the third room, full of children's toys, she finds a pair of little red shoes that she can't resist picking up to "imagine the wee soft pink feet that they had covered."  Promising herself to return the shoes to the house the next day, she makes her exit.  It is then that she hears "the whimpering cry and the soft-tapping of tiny baby fingers" on a window pane, the first of many experiences she will have at this house before she discovers what everything means.  Not only did her experiences chill me to the bone, but when all is revealed, it turns out that there is a greater horror than what she had been through.  As  Baker notes, this tale is one where  "visible and audible imprints on the landscape"  as well as the "ghostly visions" replay a terrible tragedy.
Once again I find myself a happy reader; I knew the British Library Tales of the Weird series was going to be great after the first book I read and I have yet to be disappointed; Minor Hauntings continues that streak.Very highly recommended.
Posted by NancyO at 1:05 PM No comments: