...and the saga continues: The Spawning, by Tim Curran (Book Two of The Hive Series)

"They didn't take the hint that the Kharkov Tragedy was the only warning this world was going to get.."

Building on the events both in Lovecraft's At the Mountains of Madness and in Curran's previous novel in this series The Hive, The Spawning opens once again during the long, dark Antarctic winter.  It seems that in the meantime, what happened at Kharkov Station some years earlier has become fodder for conspiracy theorists, since the powers that be have covered up and put their own collective spins on the truth.  Unlike my experience while reading Hive, which was a little slow for me, I couldn't put this one down. It's weird (in the weird-fiction sense of the term), coolishly pulpy, and this time my tension level remained on high throughout most of the novel.  If you haven't read At the Mountains of Madness or The Hive, it's okay -- better if you have but The Spawning fills you in on the backstory enough so that you don't feel like you've missed too much.

With a prologue that's bound to get your rapt attention as twenty-five British scientists disappear from Mount Hobb station, it doesn't take long until you're in the middle of a lot of gut-twisting action, beginning at US/NSF station Polar Clime.  It starts when a helicopter crashes from nearby Colony Station, a top secret, hush-hush area "with armed guards and motion detectors," like "Area 51 or something" where "they had to keep people away."  Teams from Polar Clime are sent to the crash site, and right away one of the men, Slim, notices something odd about the crash itself.  Trying to extricate bodies from the wreckage, Slim happens to see something under a tarp, which right away, his friend Coyle realizes is "more than just a charred body...Something bad."  It isn't long until the "spooks" from Colony Station appear; their leader, Dayton orders the Polar Clime teams to leave. Coyle realizes something's off -- and not just with the crash. As he notes:

"The whole scenario was spooky and strange. First Mount Hobb and then this crash and now Dayton with his James Bond shit."

But "spooky and strange" will turn out to be an understatement.  After returning to Polar Clime, Coyle decides he'll join some of the others in viewing a live NASA feed of the historic landing of the Cassini 3 spacecraft as it lands on Jupiter's moon Callisto.  As they're watching, the craft's camera records "a series of interconnected megaliths" that will set off a chain of events that will eventually affect the entire world as we know it. Add to this horrific occasion a number of strange doings at  the NOAA Field Lab Polaris and Emperor Ice Station on the Beardmore Glacier, and it will be all Coyle and his companions can do to maintain their sanity and stay alive in the process.


The tension builds from the novel's beginning and rarely lets up.  The chapters are short, the action moves around from place to place but never lingers too long in one spot, keeping the reader hooked.  Once again, as in Hive, Curran builds on the work of Lovecraft without copying his tone or style, letting his own writer voice come through.  Thematically, one of the main themes reveals that in their zeal to maintain secrecy, the government and other powers that be keep too many secrets and ignore lessons from the past that probably should have been heeded -- in this case, to the detriment of the world's population.  Once again though the characters seem a little bit too pat, often bordering on stereotypical; the whole us vs. them (the common man vs. the government and the scientists) is also very obvious. Also, while the story moves along at a good pace, Curran sometimes spends a little too much time with his characters pondering what all of this means.  However, I enjoyed The Spawning much more than its predecessor -- and the cliffhanger ending left me wanting much more.  So come on, Tim Curran -- it's been four years already -- time for the next installment!
Posted by NancyO at 8:26 AM No comments: 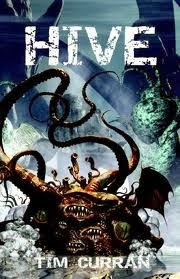