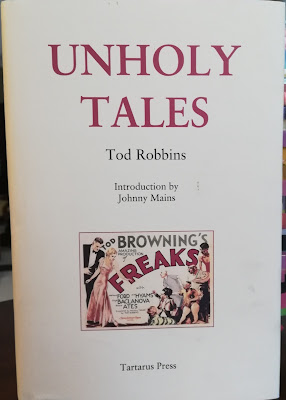 I don't know what inspired the powers that be at Tartarus Press to put out this volume featuring stories written by Tod Robbins, but it was more than a great idea.  Megacheers to you.

Robbins' work may not be familiar to everyone (it certainly wasn't to me before reading Unholy Tales) but the 1932 film Freaks directed by Tod Browning, based on Robbins' short story "Spurs," is  a movie which is regarded "as a classic, or at least a cult favorite."   And speaking of movies, another Robbins story in this volume, The Unholy Three was made into two different film versions:  a silent (also directed by Browning) in 1925 and a 1930 remake which was, as Jeff Stafford notes at TCM, Lon Chaney's "talking picture debut, and ironically, what would prove to be his final film."

Rounding it all off, pretty much the last half of this book is given over to The Unholy Three, published in 1917.

The Unholy Three is definitely the jewel in this crown.  It is an extraordinary piece of pulpy crime fiction with a supernatural-ish vibe.  I use the term "extraordinary," as I am huge fan of crime fiction from this era and have read (and continue to read) a wide variety of books filled with what I call sweet  pulpy goodness, but never have I come across anything like this story, which sets a new bar for me in that zone.  As with "Spurs,"  Robbins begins The Unholy Three at a circus,  where Tweedledee (in the movie described as "Twenty inches! Twenty years! Twenty pounds!") sits contemplating the day "Men would fear him! and he would read this fear in their eyes." It's his small body,


"this caricature that made him a laughing-stock for the mob to jibber at, that turned his solemnity of soul into a titbit of jest for others, his anger into merriment, his very violence into the mimicry of violence"

that keeps him from being "taken seriously."   But deep within his soul burns an "insatiable fire" that produces "scenes of violence" and visions of a "new transformed self" in which he would be feared, with an audience that would "tremble at his villainy." Along with his fellow circus friends Echo the ventriloquist and Hercules the strong man, he grabs his chance to turn his visions into a reality.  A word of advice: don't watch the movie and think you've read the book.  As much as I enjoyed both versions, neither holds a candle to the original text.


Moving on ever so briefly (so as not to spoil)  to the short stories,  "Spurs" reminds me so much of the French contes cruels that I love.  As in Freaks, a circus love triangle is at the center of this story of revenge.  M. Jacques Courbé, a man of twenty-eight inches,  had fallen in love with Mlle. Jeanne Marie the bareback rider the first time he'd seen her act.  She, however, has eyes for the "Romeo in tights" Simon Lafleur, her partner, and views Courbé's attentions and utterances of love as a "colossal, corset-creaking joke. "  The wheels in her head begin to turn when  Jacques just happens to mention that he has been left a large estate and that he has plans to turn her into a "fine lady" if she will marry him.  Trust me on this one, she should have most definitely said no.   Not quite as grotesque as the fate of Venus in the film, but still beyond bone-chillingly horrific.   "Silent, White and Beautiful" also falls into the realm of the horrific, as an artist returns to France after a depressing attempt at a career in America, where his art fails to sell.  On his return he hits on a solution as to how to make his work as life-like as possible.  After a nonstop reading session of these two stories which open the book, I was very much ready for a wee bit of humor in  "Who Wants a Green Bottle?,"  which examines what happens to the soul of the Lockleavens after they've left this world.  I must say, this is one of the most ingenious and original wee folk stories I've ever read.  Last but definitely not least is "Wild Wullie, The Waster," which is also a story of death and the afterlife but with a twist (or two) I'd not encountered in other ghost stories.

The question that opens this book is this:


"How does an author fêted as equal in genius to Edgar Allan Poe disappear into relative obscurity?"

Unfortunately, that seems to be  very much the case with a number of writers of yesteryear whose work I admire.   Where Tod Robbins is concerned, though,  I've taken the first step onto  that "path to becoming a fervent worshipper of a deliciously twisted writer who knew how to keep his readers more than entertained" mentioned at the end of  Mains' introduction.  Two more books of Robbins work arrived yesterday, I bought and made time to watch all three films I mentioned above, and I am certainly recommending Unholy Tales to anyone who will listen.   Deliciously twisted writer indeed, and I can't get enough.