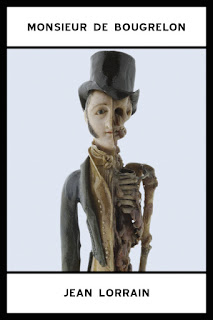 paperback -- I am beyond indebted to Spurl Editions for sending me a copy of this wonderful book. Thank you!


I am still very much a newbie to the world of fin-de-siècle literature, which for some reason that I don't quite yet understand has a strong appeal and an even stronger pull that's leading me to begin stocking my bookshelves with work from this period. I am also a relative newbie to the work of Jean Lorrain, whose books Nightmares of an Ether-Drinker and Monsieur de Phocas I've found to be absolutely brilliant.  That brilliance continues now in his Monsieur de Bougrelon, a stunning novel which anyone even remotely interested in this author needs to read.

In 1896, Lorrain and his friend Octave Uzanne traveled together to Amsterdam, a trip which evidently bored them to tears, and evidently inspired this novel.  The story begins with two Frenchmen (obviously stand-ins for Lorrain and Uzanne) touring Amsterdam, "always water and houses painted black and white" which the narrator tells us can become "eventually a bit monotonous." As the pair continue their tour of this "uniform" city, they come to the conclusion that the major attractions, "Nes, Zeedjik, the Dam, did not speak to us anymore."  It is then that they walk into the Cafe Manchester, a brothel where the whores are not at all tempting, and where they first encounter Monsieur de Bougrelon:


His redingote was green, and what a threadbare green! His pants, attached by boot straps, twisted screw-like into his heeled boots, which were thin and polished, though ripped open at the toe; his muffler of red wool, so very long around his neck, was a darned and patched-together rag full of holes; but inasmuch as this tatterdamalion was a great nobleman -- with his face of an old Capitano, made up and powdered white, his bloodshot eyes blackened with charcoal, and his mouth toothless beneath the double-comma of his waxed mustache -- this puppet personified a race, his mask a soul." (17)


The next day, since "Amsterdam awaits," M. de Bougrelon begins his role as tour guide, taking the two travelers on a tour of the city as only he can deliver.   In this city which is "all windows ... but there are no doors," the Amsterdam that they are about to enter is can be described as a world separate from reality, filled with "phantoms," which come across as  "specters" from Monsieur de Bougrelon's memories. Showing up each day dressed even more outrageously than the day before, in each place he takes them, in every story he recounts, these memories are revisited -- outlandish, frequently changed, mixed up with stories from different writers, embellished, or perhaps outright made up, but they are all filled with "imaginary pleasures, ... as only this cloudy country's atmosphere of dreams and fog can produce."   And even though they have cause to think at one point that their guide  had "gone too far" and that they were "dealing with a madman," the first time he doesn't show up our travelers actually missed him.  Amsterdam was not Amsterdam anymore without Monsieur de Bougrelon," the narrator muses, and he comes to understand that


"it was through his heroic visions that we had loved the monotony of its streets and the genuinely hostile ugliness of its inhabitants."

But I think that there is method in this madman's madness here. In a big way, this book can also be read as a sort of love story, or at least a way of preserving memories of a past love, keeping them alive or resurrecting them, if you will.   One of the first things that the vacationing Frenchmen had learned about their guide is that he has been in Holland for nearly thirty years, having moved there after he had "exiled" himself "for a man," Monsieur de Mortimer, traveling with him to The Hague after leaving Paris. Monsieur de Mortimer features prominently in each and every place Monsieur de Bougrelon takes these two gentlemen, in each and every tale spun by their guide.  On the day they are to return to France, he offers them thanks for allowing him to relive "the Amsterdam of Monsieur de Mortimer," and that for him, Mortimer's ghost


"still fills this city. He is beside me when I walk along these canals; he speaks quietly to me as I slowly roam around at night, at twilight, in our dear museum." The portraits that we once loved together smile at me, gesture to me, look at me with our former bond."

It is very easy to envision Monsieur de Bougrelon as someone who is not simply a madman or a man of "heroic visions" (absurd as they can be in some cases), but also as someone who takes great delight in showing disdain for the world he lives in by reliving a past filled with "imaginary pleasures,"  largely, it seems, created for his own enjoyment. As he says early on,


"As backward as this country is, it has moved on, but me, I stayed in place. I am an idea in an era that has no more of them,"

and later, he refers to himself as  "an outcast, an old madman cloistered in a vision that I do not want to touch," preferring to remain in an Amsterdam that is "crowded with my cherished phantoms."

There is so much more, of course, that time doesn't allow for, but Monsieur de Bougrelon continues to explore some of Lorrain's favorite themes, including art, puppets, masks, and homosexuality; he also has occasion here to revisit "the gaze" so prominent in his Monsieur de Phocas, as well as his comparisons of women to Salomé.  It is outlandish, darkly funny, definitely incorporating elements of decadence, and yet it is strangely poignant as one heads toward the end of the novel.  It is a beautiful book and I am so grateful that yet another translation of Lorrain's writing has made its way into my reading orbit.

Thanks so much, people at Spurl, for making it happen.
Posted by NancyO at 12:47 PM