HB#1: nothing says Halloween like a haunted house: *The Uninvited, by Dorothy Macardle

Just a brief note about this book.  My edition was published in 1977 and is a reprint of the original 1942 edition.   It was a bit pricey, although as it turns out, worth every damn cent, but the good news is that anyone looking for a reasonably-priced edition will find it in the new (September) edition put out by  Tramp Press. If you're an Amazon shopper, then you're in luck -- it's also available there.

On a weekend in Devon, writer Roderick (Roddy) Fitzgerald and his sister Pamela, are driving around looking for house to buy. Both of them want to get out of London and feel that they need a  "complete break with town, a life with air, space and growth in it." This is, as it turns out, their fifth weekend of looking.  They actuallly find the perfect spot, but the house itself turned out to be a "drab barrack" not even facing the sea.  Turning the car back toward London, and feeling like their "hopes had been preposterous," Pamela sees a lane she'd like to explore, convinced that there "must be a grand view from the top." It is then that they set eyes on Cliff End, fall in love with it, and ultimately buy it from Commander Brooke, whose granddaughter Stella actually owns the house. After the offer is made, Brooke reveals something that he feels obliged to mention without going into much detail:   it seems that some six years earlier, Cliff End had been occupied for some months, but the people who'd lived there had "experienced disturbances" and had left. Roddy shrugs it off -- and the two siblings begin to fix the house to begin their idyllic country life.

Not long afterward, the two learn about the  "local legend" attached to Cliff End, regarding the death of its former mistress, Mary Meredith. Mary was the daughter of  Commander Brooke, and was married to artist Llewellyn Meredith.  It seems that one very windy and stormy night, Llewellyn's model Carmel took off running toward the edge of a cliff, Mary following behind.  Carmel got pushed into a tree, while Mary went off the cliff.  It wasn't too much later that Carmel died from a resulting case of pneumonia. Left motherless was three year-old Stella, who was then taken to live with her grandfather.

Happy now that they are "at home," it doesn't take long before they start noticing a few strange occurrences, which only intensify as time goes on.  When their first houseguests arrive, things get even stranger; the horror becomes gradually worse to the point where the Fitzgeralds realize that the smart thing would be to leave Cliff End. Ultimately, though, they realize that everything they're experiencing seems to center directly on Stella.  Neither of them really want to leave, so Pamela tries to come up with a number of theories as to what's happening to them in order to find some sort of solution to be able to face down the menace that is currently in control of their lives.

The Uninvited is a wonderful story, but reading carefully, it's not difficult at all to see that there's  more going on in this book than just ghosts and a haunting.

While I'm not going to go into any detail at all in the way of what I think is going on here besides all of the supernatural events, I will say that I saw different undercurrents at work here, including repression and marginalization, a reluctance to dig up past history even when it's the only hope for the future, and most importantly perhaps, motherhood under the microscope.

I have this deep and abiding love of good haunted house stories, and I have to say that I was very, very happy with The Uninvited on many levels. On the other hand, the novel was slow to start, but it wasn't too long before I was completely absorbed.  I also figured out the surprises in this story long before they were revealed; then again, that may be due to my many eons of reading crime fiction and learning to put two and two together as the clues unfold.   Bottom line: it's a fine, creepy novel that is fun to read on its surface with much deeper strains running underneath all of the ghostly activity. 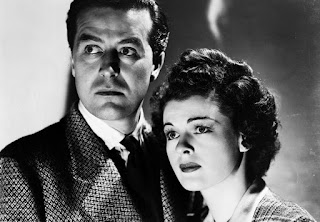 And now to the film. I had great fun watching this movie.   The first thing I noticed is that the beginning of the movie belies what's coming later on with its sort happy-go-lucky kind of opening.  Here, Rick (known as Roddy in the novel) and Pam arrive at the house with little dog in tow. There's this kind of silly fun sort of scene where the dog chases a squirrel into an open window at the house, followed by Rick and Pam where they take a tour of the place and decide that it's perfect.   We see Pam and her brother in a sort of carefree, happy mode that not too much later dissolves as the first of the strange happenings gets their attention. It's an awesome movie, and the acting, especially that of Gail Russell who plays Stella, is quite good.  I also loved how the director played with shadows here, which in some instances reminded me of classic noir film scenes. Side by side, though, the book for me was much better -- much darker than the movie, for sure.    Contentwise, the book goes much deeper into the whole mystery behind the hauntings, whereas  it gets sort of a muddled reveal toward the end in the film retelling.  And the seance scene in the novel is beyond brilliant as compared to the one in the movie.

Once again, both book and movie are yesses, and true fans of the supernatural should miss neither. Highly recommended, although both may seem tame to modern readers.  Not to me, though -- I was sucked into both and stayed suspended there until the end.