hb#5: The Cell and Other Transmorphic Tales, by David Case (ed.) Stephen Jones 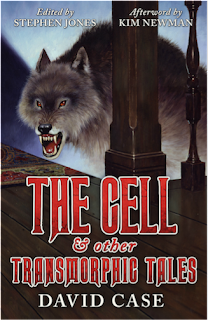 
So now we're on to werewolves, because no Halloween would be complete without them.  While I'm not really a big reader of werewolf fiction, I made an exception with this book since I enjoy and appreciate David Case's writing, what little of it there is. In a pride-swallowing sort of way that acknowledges my prejudice against "monster" stories,  I have to admit that these stories were not only entertaining and frightening, but intelligently written to the point that it's nearly impossible not to miss the subtexts lying beneath the chills.  I always thought that werewolf stories would be same-old same-old, full-moon-turns-poor-victim-into-howling-wolf sort of thing but I have to bow my head here and stand corrected.

I might have guessed from the title alone that these stories would center on transformation -- going to a random dictionary site online to look up the word "transmorphic" brings up "the evolution of one thing from another, the transformation of one thing into another."    Each and every story in this collection carries that idea forward, while remaining unique in its own way.   For example, the title story in this collection, "The Cell," which is also my favorite here, is the story of a man who has his wife lock him up once a month in a cell in the basement.  Why? Well, that is the crux of the story, isn't it, which I'm not going to divulge.   He claims that he has a "disease" that "must be carried in the blood, or more likely, in the genes," one that makes him "become something different, something dangerous."   "Strange Roots," on the other hand, finds Anton, a "brilliant scientist" working on an "investigation into the effects of chemical and glandular imbalance in mental disorders." His theory is that  this "glandular malfunction" causes "symptoms of virilism and lycorexia" which appear simultaneously, which in turn gave rise to the "werewolf legend."  He does a series of experiments on dogs to try to isolate whatever it is that produces this condition, with terrifying results.  But once again, Case gets to the heart of the concept of "transformation" here when he lets us in on one of Anton's dreams, which makes the ending of this story even more chilling. "Among the Wolves" is mystery story, in which a series of bizarre murders lead to a startling conclusion, the answer revealed through an odd tale in which two men find themselves out in the wild, facing a pack of wolves.  Next  in this collection is "A Cross to Bear," where one missionary who understands his flock completely is replaced by another who does not, with terrible consequences. Finally, we come to "The Hunter" which is a work of art in itself. A series of baffling killings in rural England comes to the attention of John Wetherby, a retired hunter who is asked by the police to help him find the person responsible. Understanding that he sort of owes it to his past to help them out, he agrees.  They're looking for "Something that walks on two legs and runs on four," and while the press speculates about werewolves stalking the moors, the trail leads Wetherby and the police to an area near the home of another hunter, Byron, an old acquaintance of Wetherby's. The hunt is on, but it's not what you'd expect.

Michael Dirda briefly touches on this book in a Washington Post article of October 2015, and he sort of sums up the lot perfectly when he says that


"Case injects more overt psychosexual frissons into tales that deliberately confuse the humanly horrific -- serial murder, rape, -- with incursions of the supernatural."

I'll add that aside from the transformation theme that runs through this book, there's also the age-old concept of man's beastly nature -- the beast within, so to speak --  that makes itself evident.  When there is an attempt to suppress this nature on the human side, it's as if the beast nature rebels, at which point the human part is put aside, allowing for the beast nature to take over.  In each of the stories in this book, we learn what it is that brings out this beast, what it is that triggers this transformation. In this sense, I'm reminded of Angela Carter's The Bloody Chamber, which delves deeply and delightfully  into the same sort of idea.

The Cell and Other Transmorphic Tales is not only a fun read  perfect for getting a reader into the Halloween spirit, but it's also worthwhile for Case's examination of the darker side of human nature. In short, it ticks my buttons both on the horror side of things and on the side of my own inquisitive nature that wants answers to the question of what it is that makes people do what they do. Personally I think horror fiction (or dark fiction) is a perfect vehicle for discovering the answers. The trick is in finding authors who share that fascination, and this book is a good place to start. 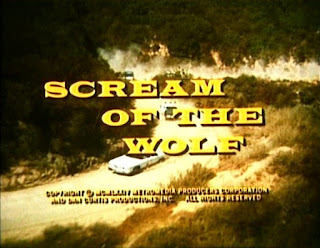 As an added bonus, Kim Newman muses on the movie Scream of the Wolf in an afterword section in this book.  It's an old movie from 1974, featured on the ABC Movie of the Week.  Directed by Dan Curtis, the script was written by Richard Matheson.  Newman says that


"We took films like Scream of the Wolf for granted when they were regularly airing on late-night TV, because they're tamer than the theatrically-released horrors of the era ... but they now have a concise, creepy appeal which shouldn't be overlooked."

Well, I don't know about that, but I will say that after I'd finished the book, I realized that the movie title was familiar but I didn't remember seeing the film. So I went through my dvd collection and discovered that I owned a 10-movie collection called Vault of Horror  (feel free to check it out -- it goes to Amazon but I get nada if you click the link), and sure enough, Scream of the Wolf was there.  So I watched it.  I didn't think it was at all frightening and while there are threads that carry from page to screen, the movie doesn't do its predecessor the justice it deserves.  In fact, I was actually thinking while watching this film that it would have been perfect for an MST3K riff.  Stick to the story -- it's so much better.

The book I'd recommend in a heartbeat.  Once again, it may not appeal so much to readers who like everything spelled out for them so they don't need to think about what they've just read, but if you're on on the flip side of that crowd, trying to figure out what's going on in each story makes for great thought time.
Posted by NancyO at 8:40 AM