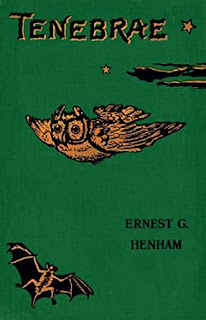 9781934555293
Valancourt Books, 2014 (reprint)
213 pp
paperback
Just about a quarter of the way through this novel, I remarked on Goodreads that Tenebrae is a book so filled with gloom that even when the characters are out in the garden it's hard to imagine sunlight.  Mind you, I had no idea that it was about to get even darker before all was said and done, but considering that the Latin word tenebrae translates to "darkness," I should have at least had an inkling.   Originally published in 1898, Tenebrae  is the story of two brothers, with "extraordinary affection for each other," right up until the time a woman came between them.
The two brothers (names are not used here)  "formed the last representatives of an ancient family, proud of its history and its name," although the house itself has been left in a state of "gradual decay." The family home sits near a cliff above the sea, with the property also containing a "desolate moor." Some of its windows had been "closed up" by "forgotten ancestors,"  now

"peered blankly through the clinging ivy, striking into the spectator's mind a latent suggestion of guarded horrors lying concealed behind..."

all of which, it seems, was pleasing to the elder brother's "naturally morbid imagination."  As just a brief aside, let me say that those three words struck a chord, keeping me on guard through the remainder of the novel.  We also learn that aside from the two brothers, this family also consisted of an uncle, who had once been a "nameless adventurer and wanderer"  now a "human derelict" whose mind had been affected by a long history of drug use of every kind, as well as an old nurse who in her own way continues to look after the two siblings.

I won't say much in the way of plot -- I could talk about it all day but in the long run, it's better to go into this book knowing little more than what's revealed on the back cover blurb.  I will say that it is quite clear that there is something not right from the outset.  As the elder brother begins writing this account of events, he reveals that he is "curiously liable to ... fits" when thinking of the younger, now dead, to the point of  the ink turning "red upon the paper," the pen "dripping with blood," and "the horror" surging before his eyes.  This is quite strange, given that he goes on to describe their past relationship as one of "great unspoken love," sharing "the same heart, the same mind, equal portions of the same soul," and the fact that they "understood each other so well that speech was often unnecessary."  Something has obviously changed, and throughout the first part of this book, so aptly entitled "The Foreshadowing," we discover what that is as we follow the course of events involving two men who loved the same woman driving the elder to, as the back-cover blurb notes,  a "murderous jealousy" that will change the lives of all three involved.  The second and darkest part of Tenebrae, "The Under-Shadow," becomes a dizzying amalgamation of madness, mania, guilt and vengeance, all coming together in the form of a giant spider, "the most hideous of gaolers."

This isn't a book I read in fits and starts -- it's actually impossible to stop reading once begun.  It is a novel that moves well beyond disturbing, owing to Henham's most excellent and atmospheric writing that has produced some of the most nightmarish imagery I've encountered over the course of my reading.   Do not bypass the excellent introduction by Gerald Monsman, but I would suggest leaving it until the last.

Very highly recommended, especially to readers who like myself, love this older stuff -- it may be well over one hundred years old, but the horror it carries hasn't faded over the years. Not one iota.