The Collected Connoisseur, by Mark Valentine and John Howard

"What we seek, and what we also half-fear, is all around us, always, had we the necessary calm intentness to discern it. " 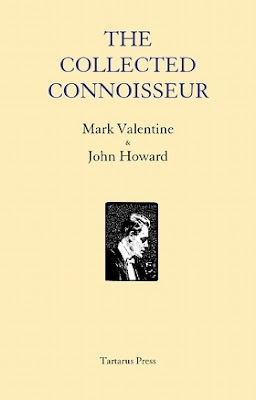 9781905784202
Tartarus Press, 2010
308 pp
paperback
Over the years I've read my fair share of stories featuring supernatural detectives, and prior to starting this book, that's what I thought I had here. What I discovered was not at all what I was expecting, but something unique instead: an "aesthetical detective extraordinaire" in the form of the Connoisseur.   He is described as a

"connoisseur of the curious, of those glimpses of another domain which are vouchsafed to certain individuals and in certain places."

The Connoisseur is a nickname given to this man by Valentine, who with the Connoisseur's consent, "dependent on anonymity and all necessary discretion," recounts "some of his encounters with this realm. "  The narrator notes that while the Connoisseur  is far from wealthy, he "supplements a decent inheritance" with "administrative work," he "shuns many of the contrivances of modern living," and is therefore able to indulge in a "keen pleasure in all the art forms."   He is a seeker of knowledge and a walking encyclopedia of the arcane; if there's something he does not know, he knows any number of people to whom he can turn for answers.  The mysteries he encounters are often  built around some sort of cultural artifact either in his possession or brought to his attention, for example, in the first story "The Effigies," the narrator is looking at a "dark earthenware jug of quite perfect form" on the Connoisseur's mantel, sparking a story about his friend's visit to its creator, Austin Blake,  renowned maker of "amphorae and delicate vessels" who had suddenly stopped producing at the height of his fame.   There are also a few occasions in which Valentine accompanies the Connoisseur and witnesses events firsthand.

It is not difficult at all to recognize the influence in these stories of those writers Valentine notes in his introduction as "lifelong companions," and "household gods":  Arthur Machen, Algernon Blackwood, Lord Dunsany, Walter de la Mare and William Hope Hodgson.  "The Hesperian Dragon," for example, is easily recognized as a delightful sort of play on Machen's "Three Impostors."  Blackwood's finely-tuned sensitivity to the hidden awe of the natural world is reflected in "The Last Archipelago," and as in the case of our narrator throughout The Collected Connoisseur,  Hodgson's Dodgson serves as chronicler of the adventures of Carnacki.    Beyond the recognition of Valentine's "household gods", however, lies something even deeper where these authors are concerned -- in the introduction, in discussing a few other writers of the 1890s he'd read, including M.P. Shiel,  Valentine notes that

"These then, the wondrous, the spectral and the aesthetical, were the airs floating around me when I began to think whether I could go one step further than reading, and try writing, the sort of fiction I enjoyed."

It is this sense of the "wondrous, the spectral and the aesthetical" that he and in the last few stories, John Howard capture here in a style that reflects the writing of those previously-mentioned authors who came before, but still manages to remain quite original.    Not everyone can carry off the voice of times past in his or her writing, but here it is pitch perfect.  The last six of these stories were collaborations between the two authors, and anyone who's read the work of John Howard will recognize his style immediately.  These tales are also a bit more fleshed out, with a bit more action involved, and provide a great ending to this collection.

I loved these stories, all of which on the whole offered days of fascinating reading,   but of course and as always there were a few that stood out.   "In Violet Veils" is probably my favorite of the collection, in which an experiment in the "revived art of the tableau vivant" results in a warning by the Connoisseur that

"such curious re-enactments were not to be essayed without some peril of affecting, in unforeseen ways, those involved: who could tell what might result from such a hearkening back to the original power of the mythological image portrayed?"

He knows whereof he speaks, having experienced firsthand an eventful, bizarre tableau vivant in the past.   "In Violet Veils" has the feel of the decadent/symbolist literature I love to read, with more than a touch of the weird that gives it an extra edge of eerieness.  In "The Craft of Arioch"  the Connoisseur relates to Valentine his strange experience during  a "walking holiday" in Sussex with his cousin Rebecca. Having left "the high roads and the dormitory towns" and traveling the "winding roads and nestling villages," they eventually find themselves at a barn where they expect to find hand-crafted rocking horses.  Let's just say after a ride on a "cross between a horse and a white dragon," and "a winged cat with preternaturally pointed ears and peridot eyes," they return from "unknown regions" and "a plane of experience different to anything we may find in this world."  "Sea Citadels," "The Mist on the Mere," "The White Solander" and "The Descent of the Fire" round out the list.

At the beginning of "The Secret Stars" The Connoisseur in conversation with Valentine notes the following:

"What we seek, and what we also half-fear, is all around us, always, had we the necessary calm intentness to discern it."

The Connoisseur's "rare glimpses" are the very heart and soul of this book. 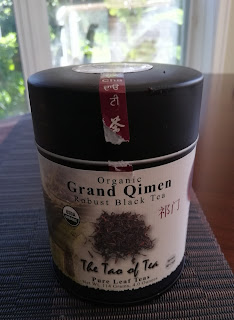 The Collected Connoisseur is one to read curled up in your favorite reading space, hot cup of something or other in hand.  Like the Connoisseur, I am quite partial to Qimen/Keemun tea; I  am also one of those people described on the back cover blurb -- "the lover of esoteric mystery and adventure fiction. " More to the point,  I am also in complete awe of Valentine and Howard's visionary writing here and elsewhere.    Every reader of the weird, the fantastical, and of the occult  should have The Collected Connoisseur sitting on his or her shelves.  No collection would be complete without it.