Resonance and Revolt, by Roseanne Rabinowitz. I love this book. I seriously love it. 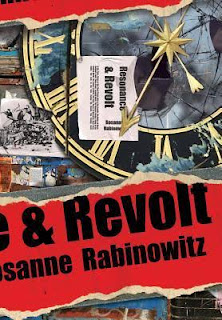 
"I will always raise my  voice and write things down so people will know about them. I will never be like a bell without a tongue."

There is just something about this collection of stories that makes me want to buy a gazillion copies of it, then hand it out to people and tell them "you really need to read this."

The tales offered in this book by Rosanne Rabinowitz, as noted by Lynda Rucker in her introduction,


"weave a cyclical sense of the ebb and flow of power and tyranny and resistance ..."

which you might expect from a book with this title, but that is really just the beginning.  At some point as you're reading, it dawns on you that while you've started out in some recognizable reality, suddenly  you find yourself "between the boundaries of the known places"  and have arrived at "other places, special ones," as her stories make a nearly-imperceptible shift into the periphery of the strange. What makes this collection of stories so unique and so different is that they work sublimely across time and space, past, present, and future, ultimately revealing that  "time and history exists in layers all around us" and that we are  "living with echoes of and surrounded by the past."

Here's part of the actual blurb:


"A secret sect of medieval heretics stumbles upon the secrets of quantum entanglement, a centuries-old wanderer thrives on rebellion as well as blood in the ruins of post WWI-Munich. Anti-austerity demonstrations lead to haunting connections with past and parallel events, while quantum computing meets 'welfare reform' in our near-future.  Meanwhile, persecuted Jews in early 20th century Russia must decide whether extraterrestrials are allies or the schnorrers out of space."

When I read that little bit o' the blurb before I'd even started reading Resonance and Revolt, I knew then that this book and I were going to be soulmates. I'd also read something (and I can't remember where, sorry), that showed the author describing this book as a "melancholic merging of social realism and the strange," and that is an absolutely spot-on description.

As just two examples of what you'll find here (although you really have to experience this book firsthand to really appreciate it), the first story "In the Pines,"  is  a sort of triptych of tales that occur in different points in time, where the centerpiece is a particular song that puts the main characters "in synch with signals and waves elsewhere," and reveals a concept that the author calls "dissonant symmetry." It begins with a woman in the past who's lost someone, and as she's trying to deal with her loneliness, the future offers its own echoes to her. Things move forward in time, carrying with them not only that song but adding to it a  deep resonance of loneliness.    In another story, "Return of the Pikart Posse," a young woman with her job on the line and a not-so-satisfying relationship travels to the Czech Republic to learn more about her subject of  her Ph.D. research.   Evelyn  is focused on a particular member of the fifteenth-century "heretic"  Pikart/Adamites, a group who broke away from the Hussite orthodoxy and thus became a target for violent repression. She takes as a sort of mantra a line from the book Lipstick Traces that "Unfulfilled desires transmit themselves across the years in unfathomable ways," and has "set out to decipher all those unfilled desires as they hurtled across the centuries."  She gets her wish, in more ways than she thought possible, as she "entwines" with the past.  This will not be the last story which works on these opening ideas, as they continue to  float throughout this entire collection.   And really, part of the genius of this book is that  the final story, "The Turning Track" (written with Mat Joiner and one I've read before in the excellent Rustblind and Silver Bright ed. David Rix) brings us back 'round to the first in a most brilliant and beautiful way.

Lynda E. Rucker sums up my feelings about this book in the first line of her introduction:


"There's something very special about finding a writer whose work speaks to you in a particular way."

Author Roseanne Rabinowitz definitely speaks to me --  I've always believed that "history exists in layers all around us," and not solely in terms of events.  The book is a beautiful blending of the historical, the mystical, the surreal, and the strange, but even more than that, it is a book that is absolutely relevant to right now in her rendering of  many recognizable contemporary issues.    The stories do not easily yield answers, but the more you read the more in tune you become, as her writing not only crawls under your skin, but deep into your pores, your veins and your entire being.  And do not miss the excellent and most insightful introduction, but leave it until last.

I'm so incredibly impressed with the people who write for Eibonvale --  as far as I'm concerned, the authors I've read have all made it to the very peak of  my imaginary tier of writers of the strange.

I also have to once again thank the lovely Alice for sending me my copy of Resonance and Revolt. She made me a very happy person for introducing me to the work of  Roseanne Rabinowitz.  I love her work. 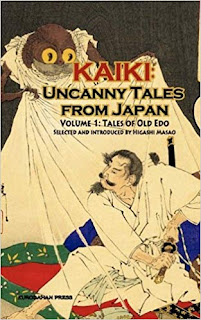 Posted by NancyO at 2:12 PM No comments: