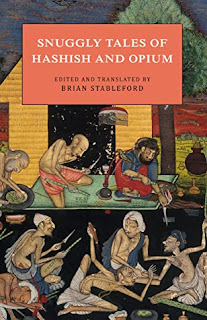 The remainder of these excellent stories are as follows:
"The Double Room" by Charles Beaudelaire
"The Opium Smoker's Dream," by Pompon
"The Malay," by Jean Richepin
"The Green God," by Gabriel de Lautrec
"The Phantom of Opium," by Louis Latourette
"Telepathy," by Theo Varlet
"The Opium Den," by Louy de Lluc
"The Initiation," by Frederic Boutet
"Dropping in on Anika," by Victor Margueritte
The only downside of reading this book, is that it is yet another  that needs to come with a warning label, as it caused me to pick up five more books even before I'd finished it.  Of these, four were from Black Coat Press and were edited or adapted by Brian Stableford:
The Second Life, by X.B. Saintine
The Crazy Corner, by Jean Richepin
Weird Fiction in France: A Showcase Anthology of its Origins and Development
The Sacred Fire, by Gabriel de Lautrec
while number five, Claude Farrere's  Black Opium: Ecstasy of the Forbidden (1904) is a reprint of the 1974 edition, from Ronin Publishing (2016).   The toll on my wallet would have been much worse except for the fact that I already own several books mentioned in this one, a number from Snuggly books, some from Black Coat Press, and a couple from Dedalus.
I get that French decadence is not for everyone, but it certainly is something I love, and this book is no exception.  Truth be told, I could read this book over and over for days on end -- it's that good, an experience of sheer reading bliss.
Posted by NancyO at 1:58 PM