arachnaphobes beware (part two): The Sign of the Spider, by Bertram Mitford 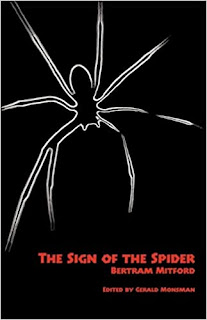 9781934555460
Valancourt Books, 2008
originally published 1898
247 pp
paperback
"Every conventionality violated, every rule of morality, each set aside, had brought him nothing but good..."
The back-cover blurb describes The Sign of the Spider as a "thrilling mixture of adventure, romance, and horror." It was the combination of "adventure" and "horror" that was the draw for me, and while I'm not a huge reader of monster-type horror fiction, in this book it works.
A most unhappy, dissatisfied Laurence Stanninghame who is "just touching middle age,"  has decided that he's had enough of his "awful life," and has booked passage to Johannesburg to try his luck in the "boom."  Some of his acquaintances had done the same and had "made their pile," so why shouldn't he have a shot at the same? He has also become a bit tired of the "warfare" with his wife, a woman who had many fine qualities, but who was also his equal in will.   Once "eager, sanguine, warm-hearted..." he has become as this story begins, "indifferent, sceptical, with a heart of stone of the chronic sneer of a cynic."   Perhaps this change has come about because Laurence is one of those people for whom "everything he touched seemed to go wrong," but now he's decided that it's time to "cast in the net for the final effort."
Once in Johannesburg, however, it seems that he has arrived a "day too late," in the midst of a speculation market (and a colonial economy in general)  facing setbacks.   At first things were "rosy" but as time went on and Stanninghame had taken the route of "all or nothing," he loses everything:

"He had come to this place to make one final effort to retrieve his fortunes. That effort had failed. He had put what little remained to him into various companies -- awaiting the boom -- and no boom had ensued...He was ruined."

Things look so bleak for him that he picks up his gun, contemplating suicide, but in his room the face of Lilith Ormskirk, a young, independent woman whom he'd met on the passage from Southampton, comes to him and saves him at the last moment.  But what to do now?  As far as Stanninghame is concerned, he would sell his soul "to the devil himself."   Not too long afterwards,  a certain Hazon offers him the opportunity to go up country and "come back a fairly rich man."   As rumor has it, Hazon has taken men up country before,  but "not one of them has ever returned."  Laurence, however, views the opportunity as "the suggestion of adventure "on a magnificent scale, and with magnificent results, if successful." As the back-cover blurb reveals, Hazon is a slave trader, but as Laurence says at one point,

"The one thing to make life worth living is wealth. I will stick at nothing to obtain it -- nothing! Without it life is a hell; with it -- well, life is at one's feet. There is nothing one cannot do with it -- nothing!"

And indeed, he seems to have few qualms about what he does, feeling as though he is complying with the "iron immutable law of life" of "Preyer or preyed upon."  As he sheds the trappings of "that damned respectability" while traveling deeper into the interior with Hazon over the next few years, he is captured and taken into the hidden realm of the so-named "People of the Spider." There he is somewhat hesitantly accepted among the tribespeople, but in time Stanninghamme finds himself, as the back-cover blurb reveals, "marked out as a sacrifice to the monstrous spider-god."

As with other books written during this time period, The Sign of the Spider is incredibly difficult to read today because of its racism and subject matter,  but when all is said and done it is a story of one man's journey as he discovers "the consistent and unswerving irony of life as he had known it."   He explains that

"Every conventionality violated, every rule of morality, each set aside, had brought him nothing but good to him and his,"

but  for me, the question here centers on the price he has paid and will continue to pay in the long run.  I have to say that I thought I'd be reading a sort of rugged pulp adventure story complete with a cryptid arachnid thrown into the bargain, but what I got instead was a story that has a depth I was not at all expecting.

Save the excellent introduction for last, but most certainly do not skip it, as it adds even more to the reading of this novel.

With the acknowledgment that it's tough going subjectwise, I can certainly recommend this novel, and I'm looking forward to reading the other book by this author now sitting on my shelves, The Weird of Deadly Hollow.