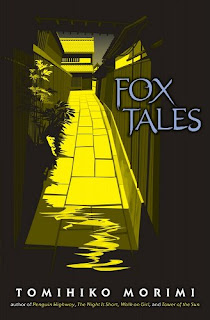 "On short summer nights, in between the rice paddies, the foxes scatter."
97819753354665
Yen On, 2022
published as Kitsune no Hanashi, 2006
translated by Winifred Bird
228 pp
hardcover
I don't remember where I first came across this title, but I do remember looking at the description and thinking that this book is so me:

"A collection of four spooky tales for the modern era, all tied to a certain Kyoto curio shop."

These stories play out in the streets of the city, and as the dustjacket blurb goes on to say, over the course of the book the author "offers an eerie glimpse into the beguiling and mysterious darkness of the old capital."   Eerie, most definitely.  Mysterious, an understatement.
If you're not familiar with Japanese mythology, in a nutshell, kitsune or foxes (according to The Collector) "possess many powerful magical and spiritual abilities, including shapeshifting, far-seeing, high intelligence and longer lifespans." They are also viewed as tricksters, and can be benign or benevolent.   There are any number of websites you can turn to such as Ancient Pages, Yokai.com or anywhere you can get to by looking up Japanese mythology or folklore.
The title story, "Fox Tales" introduces the reader to Hourendou (and I do wish I could see the Kanji for this word to try to glean some sort of meaning),  a curio shop "the size of maybe six tatami mats."  The narrator, a university student, first met Natsume,  the proprietor of the shop, when he worked delivering bento lunches.  A year later, he was working at Hourendou, his job to watch the shop and make deliveries.  The story opens as he is delivering something to a strange man by the name of Amagi, who lived in an old mansion near the Saginomori Shrine.   Natsume reveals to the narrator that she should have gone there herself, but she doesn't like going to Amagi's house.  He, in turn, decides that it was his duty to take on the Amagi deliveries himself to "ensure that Natsume never went there again."  Things begin to happen when the narrator drops a particular plate in the shop and  is sent to Amagi for a replacement.   Natsume warns him that Amagi might "jokingly" request something, but "under no circumstances should you agree" and that he must not "promise him anything, no matter how insignificant."  Unfortunately he fails to heed that advice, and after the first trade he makes with Amagi, he soon finds himself involved in a trade involving a fox mask.  It's really at the this point that things take that turn to the strange and the weird, and all the while the narrator tries to understand how Amagi had "managed to sink his claws so deeply into my soul. "  Pay attention: this one lays many a foundation for what follows.
In "The Dragon in the Fruit," a university student spends a great deal of time with a rather isolated and lonely senior student, listening to his numerous stories.  The senior has many --  as he tells the other, in the five years he'd been in Kyoto,  "some mysterious things have happened," and he proceeds to relate a few of his bizarre experiences in the city.  His tales encompass a woman in a fox mask, unique magic lanterns, the strange appearance of a "lightning beast",  a very real serpentlike creature with a face like a crocodile supposedly captured in the Meiji era,  and a netsuke of a dragon "coiled inside a piece of fruit," any of which he feels he might run into as he walks through the city.
As the senior says about the people of Kyoto,

"Most them are strangers, but I know they're connected by mysterious threads I can't even imagine.  And when I have the chance to touch one of those threads, it makes a strange sound under my fingers. I think that if I could trace them all to their source, they would lead to a mysterious, shadowy place at the very core of the city."

Holding that thought, the weirdness continues in "Phantom,"  in which a guy who enjoys "exploring the tangled backstreets" and alleys takes a job as tutor to a somewhat "laconic high school student" and becomes caught up in a hunt for a "phantom ..."  also described as "something like a spirit" in the area. Surprises are in store in this one, and the ending is not only eerie, but sinister and foreboding.    "The Water God" rounds out the collection, with a family which has gathered on the death of an elderly relative telling stories and sharing memories and family history that go back in time as they wait for a "family heirloom" to be delivered from Hourendou.  All I can say is 神聖なたわごと ...  this was my favorite story, as well the absolute weirdest tale in the entire book and one of the creepiest I've ever encountered.

Fox Tales just sucked me right in, with the combination of the author's skill in creating a dark, almost suffocating at times atmosphere as well as his awesome storytelling abilities.  This is the type of book I look forward to reading, where the mystery of it all pulls me in further and further until there is no outside world for the duration. And as I mentioned in an earlier post, I love folklore of any kind, and  I actually got a bit more from this book than I bargained for in a good way, with Japanese mythology and folklore interwoven into each and every story.  Along with the strange connections to the curio shop advertised on the dustjacket, it is this element, I believe, that ties everything together and gives this collection its heft.  This book may not be for everyone, especially those readers who need explanations to make their reading complete, which leads my to my only criticism:  it might have been helpful to have added some sort of introduction for non-Japanese readers who may not have much familiarity with Japanese folklore.

For me, this book was a great way to end the 2022 reading year,  and it's one I can recommend highly.