The Death Spancel and Others, by Katharine Tynan 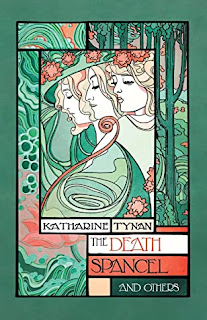 9781783807543
Swan River Press, 2020
221 pp
paperback
"There's few could look on the boorwaugh washa, the death spancel, without terror."
For me there is no greater comfort than to make a pot of tea, grab my favorite blanket and crawl into my favorite comfy chair with a book of older ghost stories in hand.   Let's just say that it is much more comforting than even my favorite comfort food (a grilled cheese sandwich with some fresh homemade tomato soup  - a childhood holdover), and that the pleasure is augmented when what I'm reading is written by an author whose work I have not previously read.  Imagine my pleasure in finding this book (thanks to one of my like-minded goodreads friends)  -- but I did have to ask myself the following question:
what the hell is a spancel?
As anyone might do, I googled it and discovered that it's something that "hobbles" or "tethers," with the original usage having to do with cattle.  It's definitely not put to bovine use here though, as I discovered, in not one, but two stories: first, the titular story "The Death Spancel"  and a bit later in the book,  "The Spancel of Death."  In simplest form, it is  skin cut from a corpse from head to heel in one swoop, much like one might do with an apple.  From the second story we learn that the cutting of the skin is done with "ceremonies so awful that it would make this story too ghastly reading to detail them."  In his introduction, Peter Bell notes that it is a "grim artifact of Irish lore;"  William Gregory Wood-martin goes a step further in his description in volume one of his Traces of the Elder Faiths of Ireland: A Handbook of Irish pre-Christian Traditions, calling it a "love charm of most gruesome character."  (Just as an FYI, that link goes to Google Books where you can download the book for free; mine is a paperback copy from Alpha Editions.) In the first story, it "dangles" from the "dusty rafters of Aughagree Chapel," a "devil's charm" of "such power that no man born of woman can resist it, save by the power of the Cross."   This story, which begins with remembrances of a priest fighting "with the demons" over the soul of Mauryheen Holion, has a most gothic atmosphere to it, as evidenced by passages like this one:

"...the servants in Rossatorc Castle said that as the priest lay exhausted from his vain supplications, and the rattle was in Dark Mauryeen's throat, there were cries of mocking laughter in the air above the castle, and a strange screaming and flapping of great wings, like to, but incomparably greater than, the screaming and flapping of the eagle over Slieve League."

The "devil-may-care" Sir Robert Molyneux and the lovely Lady Eva are to be wed in just two weeks' time, but it seems he can't help himself when it comes to the women "of a class below his own."  Even though "the germ of good in him" knows that this is wrong, and even though he  promises himself that he'll never do it again, from the moment he catches "sight of a girl's dark handsome face on the staircase" his fate is sealed. In the other story using this device, "The Spancel of Death," the girl doing the binding is an "Eastern beauty in the wilds of Mayo," Sabina Doheny,  who was once a "lonely, fierce, haunted child" and "pagan at heart" but now  "protegée"  and maid of the daughter of the local Marquis.  Lady Kathaleen's fiancé is Sir Harry Massey, and once again, as in the case of  Sir Robert Molyneux, once Sabina's eyes lit upon his face, her "heart had awakened with a madness and a violence beyond expressing."  Given that Sabina had once lived in a hut with Mag Holon, the local witch, she knows exactly where to go and what to ask for.  Be warned, old Mag reminds her,  "There's few could look on the boorwaugh washa, the death spancel, without terror."

While those two stories alone were well worth the price of this book, there are plenty of other topnotch tales included here.  I have to say that I have read more than a few volumes of ghostly/strange tales, some of which are so predictable that they're hardly worth reading, but that is not the case here. Take for example   "A Sentence of Death," which I thought was going to be a sort of rehash of Benson's "The Bus Conductor" from 1906, when something similar happens and a driver offers the main character "Room for one more, madame." But I was pleasantly surprised with what Tynan did with this story, since (as described in the introduction, which should be left until last), the focus was much more on the poor woman as she undergoes a great internal turmoil. It seems that while "Life at the Manor House flowed by in its old, delightful way," Marion Desborough finds no joy either in her upcoming wedding, nor in life itself, as her memory of an event takes a toll on her mental health and she waits for her death which she believes has been sent by portent.  Her loved ones try to convince her it was all a dream, but, well, Marion seems to know better.  And then there's "The Dream House," in which Reggie Champneys is cut off without a penny because of his marriage to a dancehall girl and even worse, Champneys, the family home he loves,  goes to another relative.  His wife, Kitty, is told about the "Champneys ghost," but this is no ordinary haunted house story whatsoever.
Two stories sort of jumped out in the "most disturbing" category,  "A Night in a Cathedral" and "The Picture on the Wall."  In the first a young officer becomes "obsessed" with a young woman who lives with her father near his regiment's barracks to the point that he follows her every evening as she enters a "gothic" cathedral for Evensong. He does this for months on end, hiding in the shadows to prevent being observed.  One night, not feeling well while "inhaling one knew not what foul vapours" he faints, only to find himself completely alone, locked inside the the cathedral, and realizes he must stay there until the morning, in the dark with no light. It's then that he notices the waters rising over the floors ...  "The Picture on the Wall" begins as a young woman refuses to give the man who loves her a specific wedding date, for reasons she will not reveal.  Eventually though she takes him home to meet her father, who not only seems hostile towards him but also puts him in a certain room of the house for his stay.  This is another one where I thought I could guess the ending, but I was (happy to be) very, very mistaken.
There are still another half dozen or so stories remaining in this volume , along with a number of poems; the final section of the book includes other short writings, including a "weird tale," by the author, a "chat" with Tynan, and a brief anecdote about fantasy author Lord Dunsany.  All in all it's a fine and engrossing collection; and while not unexpectedly some stories worked better for me than others, it was still a great pleasure to read and to lose myself in this author's strange tales.  Leave it until the end, but do not miss the great introduction by Peter Bell.  I'll happily recommend this book to others who enjoy finding new (old) authors, women writers whose work has sadly sank into obscurity,  and to those readers who are fans of older Irish fiction and folklore as well. And it's from Swan River Press, which has provided me with hours and hours of great reading time over the last few years, so you know it's going to be good.
Posted by NancyO at 1:13 PM No comments: