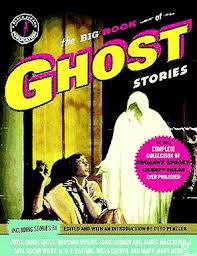 There is nothing I like better than a good, old-fashioned ghost story, and here in The Big Book of Ghost Stories, edited by Otto Penzler, I am completely in my element.  Ghosts are everywhere, roaming in the old English abbeys, conjured up in the eerie atmosphere of the Victorian seance room, moaning in old castles, sailing the seas, you name it, and a ghost will be found there.  This is an incredible collection, one I couldn't wait to get to every time I had a moment to pick it up.

The stories in this book are divided into thirteen (of course!) sections and cover a broad spectrum of authors, many of whom are known for their supernatural writings as well as others whose work is not as famous.  As Penzler notes in his introduction, many of the stories that appear in this volume have not previously been anthologized, nor have they appeared in book form anywhere else. And as he states, the stories that are found between the covers cover the range from the Late Victorian era through the heyday of the pulp mags, and he's also included some of the works of modern tellers of ghostly tales. I found perhaps two out of the entire collection that just didn't do it for me; the rest more than surpassed the creep factor I always hope to feel when reading a good anthology of scary stories.

There's just nothing more to say really, except that if you're a huge fan of ghost stories, if you can move beyond the vampire/zombie/werewolf genres that top the horror charts today,  and if you are not bound to the gory, hack/slash horror to get your chills, this book just might do it.  It's incredibly rare to find a near-perfect anthology of stories; this one definitely fits that bill.  There's an added bonus as well:  when introducing each story, there is a short blurb about each author and his or her other works.  I've used this feature to full advantage for future ghost-story reading.

Super book, best read at night when everyone's asleep and it's eerily quiet, The Big Book of Ghost Stories will likely most please readers of more cerebral weird/horror tales rather than what's popular on the shelves today.  I highly recommend it!
Posted by NancyO at 8:18 AM No comments:

Banquet for the Damned, by Adam LG Nevill

While I happen to sit on the side of the fence of readers who claim that horror is much more potent in short-story format, once in a while I run into a full-length novel that can throw a continually sustained chill down my spine.  Banquet for the Damned did just that. Although it didn't give me nightmares or produce the sort of night terrors that some of the characters suffered in this book,  the creep factor was intense enough to where I read it in one sitting -- alone, at night,wind howling outside, the perfect horror-read atmosphere.

Banquet for the Damned is set in the Scottish town of St. Andrews. As the story opens, in a "night empty of cloud and as still as space," a young man is slowly moving away from the town, across a beach to the dunes where he's fully enveloped in the darkness.  But he hasn't done this consciously, and he suddenly stops dead in his tracks, confused, realizing he'd only been sleepwalking. As he wakes he becomes aware that he's traveled a mile from his residence hall, where he'd earlier fallen asleep working on his thesis.  Out of the darkness comes a voice calling his name; fear sets in as he hears movement coming toward him. What he sees drives him into the sea, thinking that his pursuer won't follow -- but it's a big miscalculation on his part.

Arriving in St. Andrews are two leather-clad, has-been heavy metal rockers who've driven there from Birmingham. Dante has received an opportunity to work with his idol, Professor Eliot Coldwell, who works at St. Andrews University's School of Divinity. Some years back Coldwell had written a book called Banquet of the Damned, a volume of his "carefully recorded visions and bodily sensations induced by hallucinogens," such as dialogues with various spirits; probably something along the lines of the books produced in real life by Castaneda.   The book was Dante's lifeline through all of the hard times, and now he has been invited to St. Andrews where his hope is to create a concept album and make a musical comeback based on Banquet of the Damned, along with Tom, his friend and companion. The new university term hasn't yet started so all is relatively quiet in St. Andrews, but their arrival coincides with a police investigation underway at the beach where their curiosity gets the better of them as they go take a look at what's happening, and immediately wish they hadn't.

Also in St. Andrews is an American, Hart Miller, who has flown in from Africa where he's been doing anthropological fieldwork studying the phenomenon of night terrors. Informed by a friend in St. Andrews that a student committed suicide in his car after a series of nighttime trauma, he came to Scotland to hopefully gain more first-hand case studies to add to his work. Posting flyers that direct anyone with "nightmares, disturbed sleep patterns, or night terrors" to come to him for a "confidential analysis," people begin coming -- many of whom share the same basic stories and same symptoms, some of whom later disappear into thin air.
The unease sets in from the beginning and increases throughout the novel, helped along by other mysterious characters -- Coldwell, his beautiful young student protegé, some of the staff at the School of Divinity and others along the way through whom the mystery behind what is happening at St. Andrews is slowly revealed to the reader.  In fact, intensifying this edginess is what Nevill does best throughout this book, revealing the terror through multiple points of view, often distorting our vision of the reality of things.   As Dante's hero worship of Eliot begins to slowly turn to disillusion, as Hart's research leads him to a discovery that lands him in the thick of things, as seemingly normal people begin to take on more sinister overtones, it becomes all too clear that there is something menacing and malignant which has "arrived to disturb the calm" of this town.

Other readers have complained about the repetition of the night-terror scenes, but I thought they were necessary for raising the tension level right off the bat.  Some have noted that Dante makes some really stupid decisions, and that is true, but my take is that in his growing state of disillusionment, he's kind of slow or maybe unwilling to grasp what's really going on.   My issues with this book are in some of the characters: first  Tom -- while you could argue that he had to be included as the first link in a chain of cause and effect as to Dante's current predicament,  we really only see  him through Dante's eyes without any real fleshing out,  so when he comes to a bad end it's not as horrific as it might be, leaving the reader unsympathetic as to what actually happens to him. And when he and Dante have a fight and Dante begins to think about their relationship, the book gets a bit draggy while we have to go through the sordid backstory that I really didn't think added to the tension of the main story.  Second is Hart and  the way he speaks -- it  is so stupid, having him refer to the women as "honey" -- sort of unrealistic for most modern American men. But on the whole, I found Banquet of the Damned  to be  a disturbingly good occult horror read.  There are no gimmicky creatures, the terror is manifested at times but for the most part cerebral, and the tension is sustained throughout the story, keeping you alert and ready for what might happen next.  Nevill writes without going overboard in the telling, and if the object of writing horror is taking the reader briefly into the zone of  the worst that  might possibly happen and letting him or her experience the fear, panic and hopelessness that abides in that space, well, he's done a great job.  The setting is inexorably linked to its already-charged historical atmosphere -- St. Andrews  was once a place of religious martyrs, witchcraft and the cleansing of heresy ; Nevill has just added a new dimension to the already-existing history of darkness there.  It works perfectly, from the dunes on the beaches to the dark Tentsmuir forests.  Highly recommended.
Posted by NancyO at 10:57 AM No comments: