Of One Blood, Or The Hidden Self by Pauline Hopkins 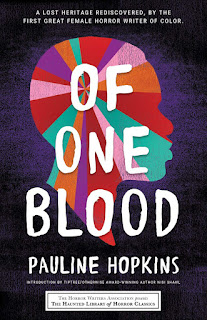 9781464215063
Poisoned Pen Press, 2021
196 pp
paperback
"...the wonders of a material world cannot approach those of the undiscovered country within ourselves -- the hidden self lying quiescent in every human soul."
Of One Blood made its first appearance serialized in The Colored American Magazine in 1902 and 1903.  The magazine, as stated on the cover, was an
"Ilustrated monthly devoted to literature, science, music, art, religion, facts, fiction and traditions of the Negro race."
Author Nisi Shawl notes in her introduction that not only did Pauline Hopkins write for this magazine, she also edited it.  About the author Shawl says that Hopkins

"is in some ways the foremother of Octavia E. Butler, and Tanarive Due, and many of today's leading science fiction, fantasy, and horror authors -- primarily because she's another African-descended woman using a popular genre to write speculatively about hard philosophical questions, surprising truths, and the wonders of the occult."

At the beginning of this novel Reuel Briggs is contemplating "the riddle of  whence and whither," which not too much later he will say the solving of which is his life; it is "that alone" that he lives for.  I marked this passage and after finishing this book, came back to it, finding it beyond appropriate given what happens in this story.

Briggs is a poor Harvard medical student, a black man who keeps his heritage hidden because of the "infernal prejudice" that "closes the door of hope."   An authority on "brain diseases," and a believer in "supernatural phenomena or mysticism,"  he often contributed articles to scientific magazines on the topic to help pay the rent.  While we are privy early on to a few of his visions, it isn't until he is called to the hospital after a train wreck to help out a woman  whom the doctors have pronounced dead that we discover that Reuel also has certain powers.  His diagnosis is that no, the woman isn't dead but rather in a state of "suspended animation," and has also been "long and persistently subjected to mesmeric influences. " Knowing this, he is able to reanimate her, although her memory has been affected; he also discovers that he is in love with her.   Eventually he decides he wants to marry this woman, Dianthe Lusk, and they become engaged, but as a poor student, he can in no way afford to offer her a decent life.  Unfortunately, his attempts at finding a medical job are thwarted, and at this very low point, Reuel's  closest friend, a certain Aubrey Livingston, has great news for him: he can make quite a bit of money as a "medical man" for an expedition going from England to "the site of ancient Ethiopian cities" to "unearth buried cities and treasure which the shiftng sands of the Sahara have buried for centuries."  Livingston has the connections to make this happen, but the catch is that there is a two-year commitment.  Although at first he doesn't want to be away from Dianthe,  but being practical about the whole thing, he decides he'll take the job.  They marry, and leaving her in the care Livingston's fiancée, off he goes, dreaming of  "the possibility of unearthing gems and gold from the mines of Ancient Meroe and the pyramids of Ethiopia."  And while in Africa, as the back-cover blurb describes, as Briggs faces "unexpected danger" before making some startling discoveries about himself in the hidden city of Telassar, he has no clue that life for Dianthe back home has also taken a rather sinister turn.  It seems that Livingston's help in getting Briggs the job on the expedition was not given out of love for his best friend, but rather for that of Dianthe.   Before this story is over,  there will be further twists that build up to a number of beyond-surprising revelations, and what Briggs finds in Ethiopia will be a treasure far more valuable than any he may have imagined.

I don't think this is a novel that you read so much for plot -- keeping in mind that this story was written in 1902, it must have been positively mind-boggling at the time, perhaps holding out some measure of hope and redemption to its readers.  It is a truly visionary novel that in the long run transcends plot, and in that sense it remains an important work still relevant today.    Of One Blood moves well beyond the combination (as Shawl notes in the introduction) of Victorian society novel and lost-world  narrative to explore "contemporary racial issues" through a variety of lenses, ultimately positing a hidden truth or two that upends everything and has, as she says "cosmologically expansive implications."  I don't wish to divulge how this comes about, but if you really want to know, you can go to Tor's website where she has written pretty much the same material that appears in her introduction to this book.  I will caution that it gives away the show so that reader awe may be diminished, and the same goes if you have this particular edition of the novel and you read the introduction before launching into the story.

I'll also note that my edition is part of the Horror Writers Association series of Haunted Library of Horror Classics and that across the top of the front cover it says that the book is from "the first great female horror writer of color."   I'd call it more speculative fiction myself, but the recognition of Pauline Hopkins and her work is well deserved and very long overdue.