Delivery Artefacts, by Jude Golby and Another 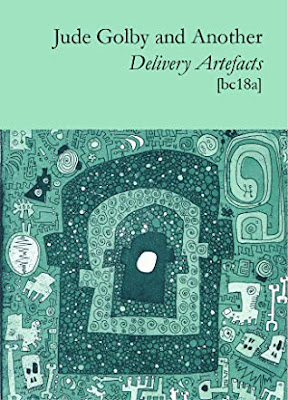 9781999629885
Broodcomb, 2021
216 pp
hardcover (#21)
It's been a while since my last visit to the Peninsula,  and I am happy to be back.  I still have one Broodcomb book left to read (The Revenants) and one to anticipate, Therapeutic Tales, which also marks the return of R. Ostermeier.   Another edition of  Therapeutic Tales is also forthcoming from Zagava this summer,  in what looks to be a gorgeous lettered edition limited to twenty-four copies  (my apologies if it's sold out by the time you click on that  link to preorder it).
Somewhere between Ockmarsh and Petersdock stands a group of old farm buildings that have been converted into a research facility, where a certain Dr. Hoskin and her team are involved in a study into preservation of the mind "beyond the death of the body."   One of the minds under study there belongs to John Moonfield, "the first of the legacy minds," which are those "that are, or were, at the forefront of their fields," and "whose death puts a brake on human progress."   While the body may be dead, these are minds that are still able to "contribute" long after death.   The short explanation of how this happens is that after a particular chemical allows

"every meat part of the brain, in a global, door-jamb rattling bang, splitting all the hinges when each synapse and connection slammed open,"

the mind's contents are stored in a substance called "chain-fluid" which afterwards are drawn out, and

"everything in a human brain, the mind, the knowledge, the personality, the memories and the essence... was decanted into a jar entire."

After that, it could be months of waiting to see if delivery is complete.   Literature teacher Jude Golby has been approached by Hoskin to come to the facility, where his task would to be "test" Moonfield, so that the scientists would be able to gauge whether or not " what has been delivered is -- in his thinking essences, the same man" whom Golby knew while Moonfield was alive.   This is a critical step in Hoskin's work -- in some cases, the process was never completed -- but if Jude can talk to Moonfield (via another process I will leave for the reader to discover)  and verify that it is the same person he'd known, then Moonfield's "reasoning and work" can  be gathered and put into "publishable shape."   Moonfield's mind is not the only one at the facility; some are "partial," some which were complete but have gone silent and another whose memories are recalled to another member of the team.   During one particular conversation with Moonfield, Jude notices that a few words did not come through as speech, and when he asks Hoskin about a particular phrase Moonfield used that could only be heard on the recording of the conversation, he learns that as the minds are delivered, "something else comes through. Artefacts." It happens soon after they return:

" They speak of places they never knew in life as existing structures within their visual understanding. But nothing can be in that chain-fluid that wasn't in their original brains. Nothing should be strange or unrecognised to them. But they speak of distant buildings, and when we drilled down into it, they all see the same structures. And they're drawn to them."

As time passes, the minds "lose focus" as they become more drawn to these structures.  Jude suggests that they send Moonfield to his structure to explore, but the scientists have already done that once with a mind that "never came back."  Jude, however, is determined to "know how they see" and to "know how these otherwheres are the same and how they're different.  He is given three days.  As the dustjacket blurb notes, the "report that unfolds is an unsettling addition to the Broodcomb Press family,"  and trust me on this -- unsettling is a mild word in this case.
There are all manner of issues explored in Delivery Artefacts; chief among them all is (as also stated on the dustjacket), "what it means to be a human being," but there's also a focus on the ethical questions that science can often raise, the nature of memory and an exploration into the mystery of the human brain. I was also happily surprised to see G.R. Levy's The Gate of Horn mentioned at the end of the book -- one of my university required reads that has made it through every move we've ever made.
While Delivery Artefacts is very different from the other Broodcomb books I've read, it is still edgy, compelling, deeply philosophical and in my case completely unputdownable.   There is nothing quite like the Broodcomb experience; as someone who has read pretty much everything from this unique publisher, I should know.
very highly recommended
Posted by NancyO at 8:16 AM No comments: 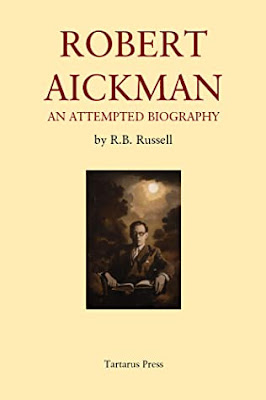 Since I use this space to keep track of my weird/strange/horror fiction reads, I decided to post my thoughts on this book at the page I use for nonfiction books.  You can read about this book here.  Let me just say that if you're still on the fence about reading this incredible book, it's well worth every single penny and every single second of your time.

I loved it. And more.