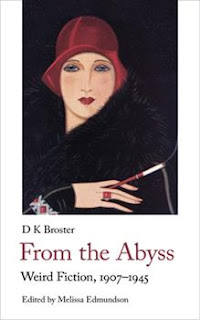 9781912766567
Handheld Press, 2022
296 pp
paperback
Handheld Press is back with yet another collection of eerie tales  by a woman writer from yesteryear.  From the Abyss focuses on the work of author D.K. Broster (1877-1950),  whose stories in her 1932 collection A Fire of Driftwood caught the eye of critic HC Harwood who said (as quoted in Melissa Edmundson's introduction) that

"In Miss Broster's short stories there is ... a lot of kick. I refer more particularly to 'Clairvoyance' and 'The Promised Land;' either of which should have established the author as a really first-rate horrifier; a petticoated Poe."

Both of those stories are found in this book, and yes indeedy, there most certainly is a "lot of kick,"  so let's just start there.  As in the best weird stories, these two tales (and for that matter all of the tales included here) tend to start out in the realm of the ordinary and the mundane, but Broster inches the reader ever so slowly to  that point where ordinary takes a strange detour.
In "Clairvoyance"  an Australian man and his wife have moved to England, where they are in the process of house hunting.  Mr. Pickering can't believe that the house they're looking at as the story begins has remained unoccupied for five years -- it is completely furnished and chock full of beautiful antiques, complete with a lake view.  The estate agent tells the couple that there's been plenty of interest, but there was "always a something" that turned prospective buyers or tenants away.  Mr. Pickering is all for taking the place, but Mrs. Pickering senses that not all is right there, and reminds her husband of the frightened look they got from a girl when they'd asked for directions to the place, asking him if it's "supposed to be haunted."  Pickering laughs it off, at least at first, until Mrs. P notices a strange stain underneath a rug and asks about it.  Her reaction is so strong that she begs Mr. P to get her out of there, and to have nothing "to do with the house" as "something dreadful has happened in this room."   Mr. P, noting that "she was not by nature an hysterical or fanciful woman," then becomes frightened himself, and away they go.  Evidently the Pickerings had never heard of the "Strode Manor Tragedy," which all started with that "business ... what the devil is called? -- clairvoyance."   By now I've read countless haunted house stories, but this one, well, expected the completely unexpected.  "Kick"? For sure.    "The Promised Land" starts out innocuously enough with a small group of people ("specimens of the truly cultivated traveller")  admiring the famous "Swoon of Saint Catherine" in the Church of San Domenico in Siena, interrupted by the arrival of two "middle-aged ladies," one of whom chases the group away by quoting out loud from her Baedeker.  Talking about it shortly afterwards, one of the three notices that the second woman "didn't look as though she were enjoying Siena much."  Quite observant on her part, actually, because Ellen (the woman about whom she was talking), was not having a good time at all, a surprise since going to Italy, for her "The Promised Land,"  had always been her dream.  For years she'd waited, and her opportunity had finally arrived.  Unfortunately for Ellen, her dream had become a nightmare in the company of her domineering, smothering and browbeating cousin  Caroline Murchinson, who had taken  it upon herself to accompany Ellen on her travels.   For Ellen the trip to Italy

"should have been the one shining oasis in the sand of a dull life, and instead it been but a bitter mirage"

because "Everything that Caroline touched lost its charm, its beauty, its freshness." From Siena the plan is to travel to Florence, which is "to Ellen's expectation the crown of all their seeing," but she knows instinctively that Caroline will ruin the experience.  That night, sleeping under a mosquito net, she realizes that she must have some breathing space  and listens to the mosquito that begins to talk to her all through night.  While this one has nothing of the supernatural about it, it's still one of the most powerful stories in the book, since sometimes the earthly horrors we face are far, far worse than their unearthly counterparts.

While there isn't a single story in this collection that I did not like, my favorite is the titular "From the Abyss," largely because it's so visible in my head from the first page onward and also because it is so out there, a definite plus.   Four friends come together for dinner and conversation at the flat of one Stephen Ellison, where the topic on the table is "dissociated personality."  The talk is obviously making Ellison uncomfortable, and when two of the friends leave without the third, he goes on to explain why.  It seems that some three years earlier, his fianceé Daphne Lawrence, had decided to go on vacation at the French Riviera with her friend Mary.  They had stopped in Nice, not as a destination per se but because it was central to any number of expeditions they might choose to undertake.  Daphne had told Ellison not to expect much in the way of writing from her end, as she and Mary planned to stay busy doing all manner of things, helped out by a young American guy with his own car, "which he more or less put at their disposal."   The next week he was shocked to see her face on a newspaper under headlines that told of an "English girl in fatal Riviera motor smash" in which the driver and the car had gone down into a "bottomless ravine."  Mary, it seems, had been thrown clear after the driver had collided with a motorcoach, and according to her father, was now on her way home after the accident.  Daphne gets home fine, but Stephen notices that she's changed, and not for the better.  Some time goes by with Stephen still trying to figure out what's up with Daphne (who now doesn't even want to marry him), when Daphne's father comes to visit with some strange news from a friend near Nice.  It seems that a young woman with a British accent  swears that she had gone down with the driver into the ravine, and yet had managed to climb up a nearly sheer precipice deemed "quite unscaleable." She can't remember much else due to memory loss.     About the time that Stephen decides he'll travel to France to investigate, Daphne tells him of her strange dreams in which she sees "a girl like me -- only she is not me --"  For me, this one just screams weird, and I seriously had to think about that ending for a while.
Admittedly, those stories are on my top tier of favorites, but there are still eight more to enjoy; out of these the only one I'd read previously is "Couching at the Door"  but its inclusion here didn't dampen my enthusiasm for another read.  Three weeks after Decadent poet Augustine Marchand returns from Prague, he finds himself being stalked by what looks like at first a "piece of brown fluff" that eventually grows into something like a fur boa.  Now that might sound a bit silly, but there's nothing at all silly about what happens when Lawrence Storey, an illustrator, goes off to discover "les choses cachées" that Marchand reveals will "liberate" his "immense artistic gifts from the shackles which still bind them."  Seriously awesome story with an even more awesome ending.   And then there's "The Taste of Pomegranates" which wins my vote for most disturbing, in which two sisters vacationing in the Dordogne make a date with a French archaeologist to visit his current project, a cave by the name of the grotte de la Palombière. On the appointed day, the two women show up, along with a writer doing research in the area for his book on the Hundred Years War, but there's no sign of the archaeologist.  After a while the writer goes off to look for him, leaving the sisters behind. Rain forces them to take cover, and while they wait, one of the sisters decides she wants to explore the cave.  Absolutely not a good idea, as it happens, but of this one I will say no more.
I seem to have joyfully landed  in my reading element here with this book, with its blending of the supernatural, the weird, obsession, history, art and social commentary but more to the point, with the discovery of an author from long ago whose work is new to me.  My many thanks to Handheld Press for my e-copy; while their website offers August 9th as the release date, I found a hard copy at Amazon which now sits with the other books I've bought from this publisher.  Some day I would love to just sit and chat with Melissa Edmundson, who somehow manages to find the best authors from bygone days, bringing them to the attention of modern readers.   From the Abyss is truly a gem of a collection that should absolutely not be missed by readers of the weird and the strange; it is also a book I can certainly and highly recommend.
Posted by NancyO at 7:18 AM No comments: