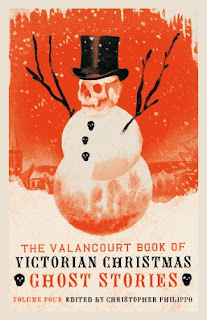 9781948405805
Valancourt Books, 2020
231 pp
hardcover
You need look no further than the announcement of "the Best Ghost Story" contest (reproduced on p. 74)  as advertised in New York's  Evening World, December 23, 1889 issue to see that ghost stories,  "in Keeping with the Christmas Holidays," were alive and well in America.    In this book, rather than drawing on the Victorian British tradition of telling ghostly tales at yuletide,  editor Christopher Philippo makes the case throughout that the Christmas ghost story tradition was also going strong in America during the same time.
Volume four is a fine mix of stories, ghostly and otherwise, set at Christmas time along with a few poems, Christmas-themed advertisements and holiday-based newspaper articles of the period.  As with the best anthologies, it starts out with a bang, whetting the appetite for what follows.   Joseph Holt Ingraham's "The Green Huntsman; or The Haunted Villa," a "Christmas Legend" hailing from Louisiana was originally published in 1841, then later got "an English stamp of approval" in 1858 with its appearance in the Huddersfield Chronicle and West Yorkshire Advertiser of December 24.   Set during a "Christmas festival" at a villa in the "upper faubourg" of New Orleans,  a new bride and bridegroom are also celebrating their nuptials and the "bridal night" is about to begin. Everyone is happy until things become weird at the neighboring "ruined mansion" known as the Haunted Villa, which "to every mind supernatural terror was associated," and with good reason.
My favorite story in this book is Julian Hawthorne's "The Devil's Christmas" which would be fully at home in any anthology of the weird.  It seems that the narrator of this tale has been invited to a Christmas party at the home of a well known socialite, at which the highlight of the affair is to "meet the Prince." It will be a Christmas he will most likely never forget.
Others receiving my vote of honorable mention are the anonymously-written  "Worse Than a Ghost Story"  in which a dying "spiritualist with the reputation of being a superior 'medium'" gives a warning to her disbelieving husband, followed by  Frank Ibberson Jervis' "The Frozen Husband," the story of a beautiful young woman who falls for and marries a stranger known only as "the brown man." This one was delightfully creepy and thoroughly chilling.  F.H. Brunell's "The Ghostly Christmas Gift" also makes this list in a story of events in the gold fields of South America that turns utterly eerie as a man receives a bizarre Christmas gift each year in payment for the treachery that made him wealthy.   "The Blizzard" by Luke Sharp (pen name of Robert Barr, Jr.)  has more than a touch of irony that made me laugh when all was said and done, while  Henry Beaugrand's "The Werwolves" has the feel of a mini-epic involving native Americans who disappear "by enchantment" and who may actually be "a band of loups-garous."  Add to the mix a spurned and vengeful lover, and you have one hell of a fun story    Supernatural indeed, with an added feel of delicious pulp goodness.
While I'm not really a major poetry person, there are two that I feel are beyond noteworthy: first, Paul Lawrence Dunbar's poem "The Haunted Oak," about which the editor says "the voices and silences" therein "seem as raw and necessary as ever" (to which I wholeheartedly agree),  and on a much lighter note,  HC Dodge's shape poem, "Poor Jack," the musings of a somewhat "demonic" jack-in-the-box.  Quite honestly, I've never seen anything like it, and I was so fascinated that I posted a photo of it on my facebook page: 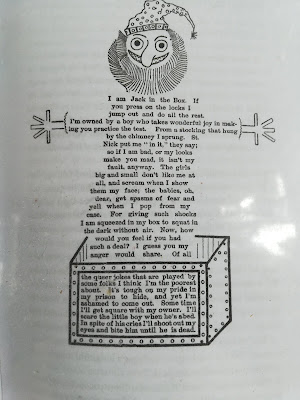 I may be wrong since I haven't read every anthology of Christmas ghost stories ever published, but at least in my experience this is the first time someone has taken the time to put together a volume such as this one.   Given that I've never come across anything  like it before, it is a most welcome addition to my home library as well as a book I'm recommending to everyone.   Do not skip Mr. Philippo's informative and  excellent introduction, and above all, do not feel badly if you miss out on this book at Christmas time because it makes for great entertainment any time of the year.  Nicely done!