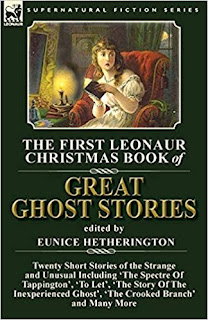 9781782826958
Leonaur/Oakpast, 2017
367 pp
paperback
Ever since Valancourt started issuing their annual Book of Victorian Christmas Ghost Stories, I've found myself fascinated with the idea of the tradition of reading ghostly tales at Christmas.   As Jerome K. Jerome stated in his Told After Supper (not included in this book but in the subject of the second part of this post, Tanya Kirk's Chill Tidings: Dark Tales of the Christmas Season),

"Whenever five or six English-speaking people meet round a fire on Christmas Eve, they start telling each other ghost stories. Nothing satisfies us on Christmas Eve but to hear each other tell authentic anecdotes about spectres. It is a genial, festive season, and we love to muse upon graves, and dead bodies, and murders and blood."

Not that I don't enjoy reading that sort of thing at any time, but I do make an effort to find different collections of Christmas ghost stories every year.  To my great delight, I discovered that Leonaur Books has published not one, but two volumes of Christmas Book of Great Ghost Stories.

Out of the twenty stories in the first book I'd read only eight:
"Man-Size in Marble," by E. Nesbit
"An Eddy on the Floor," by Bernard Capes
"The Haunted Organist of Hurly Burly," by Rosa Mulholland
"The Open Door," by Mrs. Oliphant (one of all-time favorites)
"The Upper Berth," by F. Marion Crawford,
"To Let," by B.M. Croker (which happens to be my favorite of the entire bunch)
"The Withered Arm," by Thomas Hardy,  and
"Thurnley Abbey," by Perceval Landon.
Of the remaining twelve, the anonymously-written "The Story of Clifford House" is worth a mention, while  Grant Allen's "My New Year's Eve Among the Mummies" was, I think, somewhat misplaced, having a better home in Andrew Smith's (ed.) collection Lost in a Pyramid and Other Classic Mummy Stories (which I'll be reading at some point in 2021 when I feel the need for pulpy fun).
Moving on to book two, nine of these stories were familiar:
"The Old Nurse's Story," by Elizabeth Gaskell
"Bewitched," by Edith Wharton (a perennial favorite)
"At Crighton Abbey," by M.E. Braddon
"An Account of Some Strange Disturbances in Aungier Street," by J. Sheridan Le Fanu
"The Botathen Ghost," by R.S Hawker
"The Doll's Ghost," by F. Marion Crawford
"The Ghost at the Rath," by Rosa Mulholland (my favorite of this volume)
"The Tapestried Chamber, or The Lady in the Square," by Sir Walter Scott and
"The Tell-Tale Heart," by E.A. Poe
Honorable mention here  to Henry James' "The Romance of Certain Old Clothes,"  "John Charrington's Wedding" by Edith Nesbit, and Charlotte Riddell's "The Open Door" (which has absolutely nothing in common with the story of the same name by Margaret Oliphant).   The story by Poe could have been left out and wouldn't have been missed -- again, a bit of a misplacement on the editor's part, in my opinion.
Either taken individually or as a set, these Leonaur editions are pretty good, with ghost stories of all sorts included.  While there are a few in  both books that sort of meander and made me want to skip ahead (I didn't, but almost...),  for the most part there will be something for every reader of ghostly tales.  I was somewhat disappointed though, since the table of contents lists only titles with no authors, no story provenance,  and worst of all is that there is no introduction in which to explain the rationale behind the inclusion of the stories that have been anthologized here.  I also think the contents list could have been a bit more pared down.    Still, I would recommend both volumes to avid ghost-story readers like myself and I've discovered new authors to track down for other works they may have written like the ones included here.
***
Part two of my Ghosts at Christmas posts is for the above-mentioned Chill Tidings: Dark Tales of the Christmas Season (ed. Tanya Kirk), while part three is for (you guessed it) The Valancourt Book of  Victorian Christmas Ghost Stories, Volume Four which I've just started.
Posted by NancyO at 10:36 AM