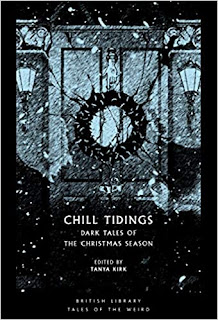 9780712353236
British Library Publishing, 2020
212 pp
paperback
"Oh, it is a stirring night in Ghostland, the night of December the twenty-fourth!!"
-- Jerome K. Jerome, Told After Supper
In Chill Tidings I have a double bonus -- a first-class collection of specially-chosen ghostly Christmas stories and another installment of the excellent British Library Tales of the Weird series. I originally bought this book to read on Kindle since Amazon said it was not due to be published in hard copy until August 2021 (??)  but  I was so completely nettled  over not having a physical book to hold in my hands that I went directly to British Library publishing for my copy.  I was so happy to have been notified about this book by one of my like-minded goodreads friends (Thank you, David!) because I'd already read and loved Ms. Kirk's Spirits of the Season (2018), also part of the Tales of the Weird series.  This volume presents thirteen stories that the editor says she wished she could have "fitted into the first book," chronologically arranged from 1868 to 1955 with one exception -- Jerome K. Jerome's "novelette" Told After Supper from 1891, placed at the end of this anthology.
Between these covers one can look forward to (according to the editor's introduction)  "traditional Victorian spookiness,"  as well as "a weird pagan vision," a "sentimental tale of redemption," and then

"spooky monks, a Vampire lady, a fatal duel, a gruesome Father Christmas and festive gifts from beyond the grave."

How could anyone possibly say no to all that?  Each and every story is set at Christmas time, with not a bad story to be found anywhere.

For "Traditional Victorian spookiness" you can't go wrong with Irish writer Charlotte Riddell.  Her "A Strange Christmas Game" finds a brother and sister who after years of grinding poverty inherit a house called Martingdale, and in doing so, discover the cause of their kinsman's strange disappearance on Christmas Eve forty years earlier.  As the narrator says, "you pooh-pooh the existence of ghosts, and 'only wish you could find a haunted house in which to spend the night ...' but wait until you are left in a dreary, desolate old country mansion .." well,  you get the drift.  Not to steal thunder from the British Library, but Leonaur has an excellent collection of Riddell's Complete Supernatural and Weird Fiction available for readers who may be interested.   Creepiness continues with Hume Nesbit's "The Old Portrait," about which the editor notes that "it's a powerful story of the Fin-de-Siècle period, and is akin to Oscar Wilde's The Picture of Dorian Gray and Bram Stoker's Dracula, the latter of which it predates."  Once you've read it, you'll immediately see why this is so.  In the meantime, not even one baby hint.  Next up from Louisa Baldwin (1895) is "The Real and the Counterfeit."  In this story, the Christmas holidays bring  "three young fellows"  to "kick it up alone" at the Musgrave family home, Stonecroft.  As one of the three notes, "an old house is not complete unless it is haunted," and to his surprise, he learns that the family has its own ghost, not seen since Grandfather Musgrave's time.  Young Musgrave's lifetime desire to "become personally acquainted" with the family ghost just may happen, if his friend Armitage has anything to say about it.  As a brief aside, for some reason, I was very much reminded of Montague Summers' "The Man on the Stairs" while reading this one.    Described as "sweet rather than scary," and a story that "features a very Victorian idealised Christmas,"   Frank Richard Stockton's "Old Applejoy's Ghost" takes it very personally when his elderly grandson, "the old curmudgeon,"  makes absolutely no moves toward celebrating Christmas in the old family home.

From 1913, Algernon Blackwell's "Transition" is the story of "an ordinary man" who finds himself caught up in an extraordinary situation on his way home to deliver Christmas presents to his family, and that's all I will say.   A.M. Burrage, whose name you may recognize from his story "Smee,"  is up next with "The Fourth Wall" from 1915,  one of my favorite stories in this volume, and so very different from the others.  Solicitor Jack Forran is told he must take time off work to recuperate from severe headaches; he, his wife, her brother, her sister and her sister's boyfriend all share a cottage "just outside the region of the fens."   It's an ideally-secluded, "ripping old place"  for these "normal, hard-headed people," until one of them begins to feel that the room they're in seems "stagey."  Let the weirdness begin.  Frankly, I am a bit sad that Burrage's work is not as well known as it should be -- he is one heck of a neglected but great teller of supernatural tales.   I was sort of wondering why HP Lovecraft's "The Festival" would show up here, but as it turns out, the poor narrator in this story had absolutely no clue just how terrible his Christmas was about to get -- it's likely he will never, ever forget the strange Yule-rite.  Creepsville. Seriously.  In "The Crown Derby Plate"  Marjorie Bowen has written  one of the most effective ghost stories ever.  It all begins when Miss Martha Pym hears of a nearby recluse who collects china and begins to wonder if perhaps she might just have a Crown Derby Plate to finish off her set which is one plate short.  Going to see her at Hartleys just might provide Martha a double pleasure --  finding the plate and seeing the ghost in that house which is supposedly haunted. After all, as she says,  she would very much like to, "particularly at Christmas for you can laugh as you like, that is the correct time to see a ghost."

Elizabeth Bowen's excellent "Green Holly" from 1944 follows, with seven housemates "Experts -- in what the Censor would not permit me to say" living and working in an old country house called Mopsam Grange while  obviously engaged in some sort of covert work for the government.  They aren't alone -- it's Christmas Eve, a special anniversary for the ethereal inhabitant, who falls for one of the earthly ones.  There is so much to this little story that goes well beyond the supernatural and miles beyond ghostly entertainment -- I've read it three times now and it's just as powerful every time.  I could talk about this one for days, but you know.   I LOVE her work, supernatural or not.  Next comes Andrew Caldecott's "Christmas Re-union" which is, as Ms. Kirk reveals, based on an idea of M.R. James as described in an essay he wrote called "Stories I Have Tried to Write." Not only is this story à la James, but his name is even mentioned within the story.   What was supposed to have been a joyful family Christmas party at the Dreyton home turns out to include a guest described by Mr. Dreyton as "a busted balloon" or a "wet blanket" that no one is happy to have there.  When Father Christmas arrives as scheduled for the children, well, let's just say that I'll never again view Santa in the usual light.  Rosemary Timperley's short  "A Christmas Meeting" from 1952 falls squarely into the weird zone, as a woman spends Christmas alone for the first time, thinking over her "so many Christmases over the years."  Her thoughts are interrupted with the arrival of a young man, a writer who didn't go with his family for the holiday, staying behind instead to work. The two strike up a conversation, and on the verge of coffee and plum cake, he disappears.  This one's a bit of a mindbender, when all is said and done, and another I read more than once.   Very nicely done.  L.P. Hartley's "Someone in the Lift" is a rather gruesome tale I'd read elsewhere, about a boy who sees a "shadowy passenger" in a hotel elevator when his father's not with him.  Let's just say that dad shouldn't have told him his thoughts on who it must be.  Memo to self: must find a good, used copy of Tartarus' The Collected Macabre Stories . Finally, last but by no means least, is Jerome K. Jerome's delightful Told After Supper, which made me laugh out loud, receiving strange looks from the spouse all the while.
This volume is truly a fine anthology, and I don't know how Ms. Kirk will top her two Christmas anthologies for the Tales of the Weird series, both of which are excellent.  If she does go on to do a third, I'll be waiting eagerly.  Of course, it's not necessary to wait until the Christmas season to read either, but I'm sort of into this whole ghostly Christmas reading tradition now and quite enjoying it.
very, very highly recommended
Posted by NancyO at 1:50 PM