hopefully, the first of many: The Valancourt Book of World Horror Stories, Vol. 1 (ed.) James D. Jenkins and Ryan Cagle

"there's something universal about the telling and reading of a good, creepy tale."
Here's the question asked by the editors:

"What if there were a whole world of great horror fiction out there you didn't know anything about, written by authors by distant lands and in foreign languages, outstanding horror stories you had no access to, written in languages you couldn't read? For an avid horror fan, what could be more horrifying than that?"

Luckily for readers like me who have experienced this dilemma, there's Valancourt's new Valancourt Book of World Horror Stories.  This book is like a key that unlocks a door to a room which once opened, yields a library of previously-unknown treasures gathered from around the globe. 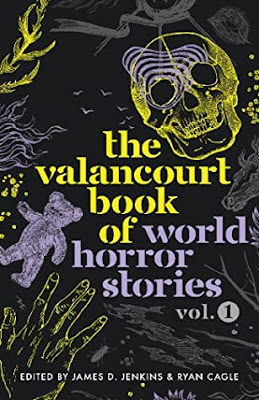 "if one takes the trouble to look hard enough, there's a much larger body of world horror fiction out there than any of us would suspect ... it often involves deep digging and venturing into uncharted waters."

The "deep digging and venturing into uncharted waters" is what the people at Valancourt do best, no matter what they publish, so I knew before I even ordered this book that I would not be disappointed.  I wasn't.

Before you even get to the main event, Valancourt has included an aerial view of sorts with a look at which countries are represented and a little blurb about each story (not that this photo is particularly legible but you get the drift): 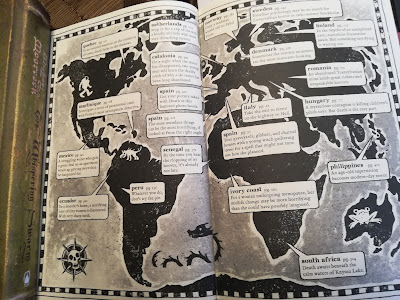 Of course, as in any anthology, it's impossible not to latch on to favorites even though all of the stories found in this volume are topnotch.  These are mine, in order of appearance.   "Uironda" by Luigi Musolino (from Turin) opens this book, in which a truck driver, as the brief description on the world map above states, takes an "exit to terror on the highway to Hell," and his "umpteenth work trip" assumes "the features of a nightmare." From Hungary comes "The Time Remaining" by Attila Veres.  The narrator of this story needs to "recount everything ... up to the point when I lost control."  It all begins when a plush toy named Vili begins to be sick, with a prognosis of death looming.  I swear that when I first started reading this one I nearly passed it by but it just kept getting better (and creepier) with every paragraph.  It was poignant, until the turn to  absolutely frightening.     "The Angle of Horror," by Spanish writer Cristina Cubas Fernández is another of my top picks, one of the most eerie tales in this book.  Some time ago, after reading her collection of stories called Nona's Room, I entered her name into my imaginary top tier of writers of the weird and the strange, so I was beyond happy to see her represented here. The editors quote Terrence Rafferty from his New York Times review of Nona's Room as saying about her that she is "most interested in the ambiguities and the periodic disturbances that plague the imagination," and that in her work, "The threat of madness is never too far away, a dark cloud hovering."   In "Angle of Horror," a young man returns home from being abroad and locks himself away in his room.  The explanation of why that he gives to his sister seems unbelievable to her, until it isn't.  As much as I loved that one, my very favorite story comes from Bernardo Esquinca (Mexico) called "Señor Ligotti," an eerie, menacing tale in which Esteban, a writer of thriller novels who is also about to become a father,  accepts a strange but intriguing proposition from an elderly man, Señor Ligotti.  The señor offers to sell him his beautiful home for whatever money he has on hand;  Esteban's wife isn't sure about the deal, telling her husband that the old man might be "the tip of the iceberg of something we can't even imagine."  Of course he fails to heed her advice, and soon comes to regret the deal.  I enjoyed this one so much that I've preordered Esquinca's El libro de los dioses, the book  from which this story comes.   "Si non oscillas, noli tintinnare..."  I dreaded each mention of those words, getting the shivers even now as I wrote them.    From the Netherlands it's "The Bones in Her Eyes" by Christien Boomsma which moves well beyond the point of disturbing to downright horrific as a young woman feels terrible about hitting a cat with her car, returns the cat to its elderly owner,  then goes to check on it the next day.  It's the ending of this one that will leave you with nightmares... I couldn't stop thinking about it for a long, long time.
Really, there isn't a bad story to be found in this book, and the beauty of this volume is in the diversity of points of view and storytelling, while encompassing ideas and themes that everyone everywhere will recognize.   The full table of contents can be found at Valancourt Books' website, where there is also a blurb from Ann VanderMeer which explains one of the many reasons this particular volume is so important, so groundbreaking and so incredibly meaningful.  As she notes, ​

"While the language of horror is universal, its means of expression necessarily varies from culture to culture... "

and the stories in this book come from "voices and perspectives we have lived too long without."

I agree wholeheartedly, and it's a shame that more of the work of these authors has yet to be translated into English.   The editors ask and answer the question of why this is so in their introduction,  but at the same time it is just a bit frustrating to know that so much great writing is out there that remains unavailable to an English-language readership.  Hopefully some day this will change, but for now at least we have this first volume as an introduction.