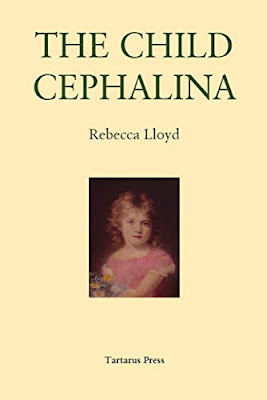 
"One mistake begats another in those folk who are blinded by their own desires."

Mid-century Victorian London is the setting for this thoroughly disquieting but captivating novel which will not release you from its grip until you've read the very last word.  Even then it may take some time; it is so cleverly done and so unsettling that in my case, it was impossible to stop thinking about it long after I'd finished.

Narrator Robert Groves is a bachelor living in a house near Russell Square.  With the help of his housekeeper Tetty Brandling and a young boy by the name of Martin Ebast, he's spent the last three years interviewing "children of the streets" as part of his research for his forthcoming book Wretched London, The Story of the City's Invisible Children.   Every Sunday Martin rounds up and brings a small group of these children to Groves' house on Judd Street; it is on one of these days that young Cephalina first appears.  It is apparent to everyone that she isn't a part of that day's group of "nippers;" the first things Tetty and Martin notice are her clean, recently-washed and plaited hair as well as the "slender and white" hands that are "delicately formed" and obviously unused to street dirt or hard work.  Groves is more than fascinated, Tetty is suspicious, and Cephalina offers little information about herself except that she lives in Hackney with her guardians the Clutchers, for whom she does some sort of work and that she has a twin she calls "E." When she returns to Judd Street a second time, she adds a bit more to (and changes part of)  her story; further visits with Robert reveal a bit more about her life with the Clutchers and a strange bond develops between the two.  In the meantime, Tetty has enough on her plate dealing with the stress caused by an embarrassing lack of funds required to run the household, and the tension between Tetty and Robert escalates as Tetty tries to warn Robert about the "sordid child," who has "too much knowing about her" and  he refuses to listen.  He  credits  her fear to her "superstitious nature," failing to notice just how deeply afraid she is of Cephalina.  Ignoring Tetty and her warnings, his obsession with and devotion to the young "waif"  grows ever stronger, as does his desire to help her, which in his own words, leads him to a "sorry mess indeed."   That is seriously all I'm going to say about the plot -- it's better to go into this book knowing as little as possible.

I normally shy away from modern writers' work set in Victorian England, because I'm a huge reader of Victorian fiction and some of these people just do not get things right.  That is not true in this case --  Rebecca Lloyd has done great things here. Her depiction of Victorian London is striking, not just in her descriptions of the "dirty, grit-filled fog," the "stench of the Thames" or the "incessant din" that could drive a person mad, but she also captures the current mood of the city, for example, in the excitement over the new Crystal Palace, or the "giant wave of spiritualism" which had found its way into London over the past three years, along with its adherents, practitioners and critics.  Her characters are substantial and realistic as individuals, but it's in the various relationships she's created between them where they thrive and give this novel meaning.   But by far the author's greatest achievement is in her ability to keep the reader on edge  as she cleverly puts together a story in which she has interwoven a number of things left unsaid, things kept hidden,  misperceptions,  misjudgments, and above all, the mystery of the enigma that is Cephalina.  From the beginning she leaves the reader with the feeling that there is something a bit off about this strange girl, and continues to heighten our interest in her by revealing her story slowly and only in small bits at a time.  The same is true in the slight scattering of clues that she leaves for the reader to follow to the chilling and shocking end.

I'm just a reader (and a casual one at that),  not a critic, but I know when I've found something of quality  and this is definitely it, a book that tells me that the author is indeed a master of her craft.   The Child Cephalina at times feels like an old serial cliffhanger, and inevitably I read it into the wee hours of the morning, unable to put it down.  It kept me guessing, very much on edge, and when that last page was turned at 4 a.m. I just sat there unable to even think of sleeping.

Very, very highly recommended.  You will want to read this book.  Trust me.  It's unlike anything I've read before.