"So here it is at last, the distinguished thing..."
-- Henry James 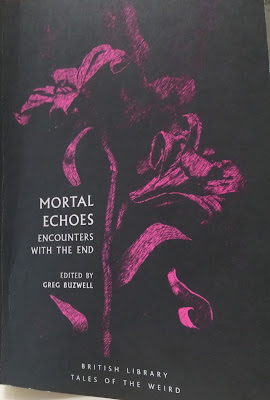 
To date I've read five books in the British Library Tales of the Weird series, leaving two unread on my shelves and anticipating  the four I've preordered which are coming in September and November.  They are not only engaging and highly entertaining,  but also include stories by a number of more obscure authors whose work I've never read.   It's a win-win.

The stories in Mortal Echoes: Encounters With the Dead  all feature someone who has had a brush with death -- perhaps but not necessarily his or her own -- as well as (quoting editor Greg Buzwell from his excellent introduction), "a particular fear associated with mortality."  Buzwell categorizes these tales as follows: the  "inevitability" of death,  stories from the afterlife,  the "reluctant" dead who are unwilling to stay in their graves,  tales of death with a humorous edge, and those which are "plain macabre."   The table of contents (in story order below) reads like a who's who of ghost/strange/weird fiction writers,  but there are also a few surprises.

The first five stories need absolutely no introduction to readers of  this genre, but don't be tempted to buzz past these -- rereads are always good.  Le Fanu's "Strange Event in the Life of Schalken the Painter" opens this volume, followed by Poe's (sadly timely read)  "The Masque of the Red Death,"   "Rappacini's Daughter" by Nathaniel Hawthorne, "The Signal-Man" by Charles Dickens and the excellent "An Occurrence at Owl Creek Bridge" by Ambrose Bierce.

New to me this time around is "The King is Dead, Long Live the King"  by poet Mary Elizabeth Coleridge , in which  a newly-dead king is given one hour to find "three that desire thy life," at which point he will be brought back to the realm of the living.  He's not worried: it seems like a sure bet,  as he is positive that he "could find three thousand as easily as three."  The irony will be lost on no one reading this story as that hour ticks down.   Another I hadn't read is HG Wells' somewhat visionary "Under the Knife," in which a man is absolutely convinced that he's going to die during an operation despite the doctor's assurance that his heart is "sound as a bell."  Then again, anything can happen under the influence of chloroform.   "Laura" is one of my favorite stories by H.H. Munro aka Saki, simultaneously weird and giggleworthy, which in this book is a bit of a relief, given the overall topic.

My favorite previously-unread story here is May Sinclair's "Where Their Fire is Not Quenched," which disturbed me to no end while reading the first time through and left me beyond unsettled after a second read.  I will say nothing about this one except that I completely agree with editor Greg Buzwell who says that "it offers one of the most disturbing depictions of eternal hell imaginable."    Another good, thoroughly disquieting and for its time (1923) probably quite shocking tale is Marjorie Bowen's "Kecksies."   Looking for refuge from a storm, the drunken lord of the Manor and his friend come upon the cottage of Goody Boyle, "a foul place," where people swear they've seen "the devil's own fize" looking out of the window.  They are given shelter, but they discover they're not the only guest in the cottage, he being quite dead.  Sir Nicholas decides 'twould be good fun to play a practical joke on those coming to pay their respects.  Very bad mistake.   The next three stories, although very different, touch on the thin line between sanity and madness: Graham Greene's "A Little Place off Edgware Road," Robert Aickman's "Your Tiny Hand is Frozen,"  and Daphne du Maurier's "Kiss Me Again, Stranger."   If you're looking for life affirmation in the midst of all of this death,  you'll find it in Donald Barthelme's "The School,"  and the book ends with a rather comical story called "Death by Scrabble," by Charlie Fish.  You'll never look at the game in the same way going forward; just be careful who you're playing against.

As always, another fine volume from the British Library Tales of the Weird series; as always, a mixed bag with some stories stronger than others depending on personal tastes.  And as usual, more authors for me to explore, which is why I read these anthologies.  Certainly recommended.