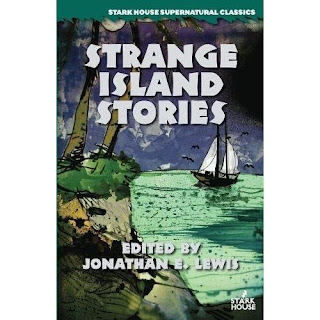 "We have come to the devil's workshop. All the horrors of the inferno are invented here."

The truth of the matter is that sometimes I just need fluff.  Fluff fluff fluff fluffity fluff. And right now, with coronavirus stress alive and well in our home, this book was just what the doctor ordered.  From the very first I was completely sucked in, able to forget about grocery store shortages and face masks for the duration (although I did clean the book with a Lysol wipe before opening).   Reading old horrorish-slash-weird pulp makes me feel good for some reason.  I've never analyzed as to why, but as long as it does the trick, who cares?

As editor Jonathan E. Lewis says in his introduction (which you can read without fear of spoilers),


"The strange island short story form, like the island novel, utilizes island locations to examine human society and human nature.  But it pushes beyond that and and takes the reader on a journey into the weird, the bizarre, the scary, and the unsettling."

All of those categories -- "the weird, the bizarre, the scary, and the unsettling" are well represented here over the course of these twenty stories.   Of course, as it is an anthology, there are some that I didn't care for but that's a matter of personal preference.  On the whole, the editor has done a fine job finding and compiling these strange tales, the majority of which I'd never read before.  The table of contents reads like a who's who of short story creepiness,  featuring stories by such greats as Edward Bulwer Lytton (here simply Edward Bulwer for authenticity's sake), MP Shiel, John Buchan, Frank Norris, Algernon Blackwood and Henry S. Whitehead (and others), and then some names that were not as well known to me including  Henry Toke Munn, Fred M. White, and George G. Toudouze, among others.  Lewis also includes one of his own stories at the end of the book as well as introducing each tale.

Of the twenty stories in this book, I've previously read four: "Monos and Daimonos," by Edward Bulwer,  "Hugenin's Wife," by MP Shiel, "The Camp of the Dog," by Algernon Blackwood, and Lovecraft's "Dagon."   Of the remaining sixteen, I'll  list only my favorites, presented in reading order.   First up is McTeague author Frank Norris' "The Ship That Saw a Ghost,"  in which a group of men sail away to complete a secret venture guaranteed to bring riches.  Their destination:


"...that region of the Great Seas where no ship goes, the silent sea of Coleridge and the Ancient One, the unplumbed, untracked, uncharted Dreadfulness, primordial, hushed,"

where they were "alone as a grain of star-dust whirling in the empty space beyond Uranus and the ken of the greater telescopes."   Of course, there's a hitch -- and serious repercussions.    "Island of Ghosts" by Julian Hawthorne, son of Nathaniel, is next, and it is indeed a truly creepy story of a young woman who decides to go and spend some time on an island reputed to be haunted.  Hawthorne delivers a tension-ratcheting tale here with an ending I did not see coming.  When I started reading "Spirit Island" by Henry Toke Munn I was hit with a wave of "I've read this before," but I really hadn't.  The more I thought about it the more I realized that it had some of the same vibe as Dan Simmons' The Terror, at least for a while.  This was my favorite story, and it takes the form of a narrative of a man's complete and utterly terrifying adventure in the Arctic which he expects that no one will believe. However, if anyone ever does and decides to send someone to check it out in the future, he notes, don't bother asking him to go along.  All I will divulge is that when your Eskimo companions tell you that a particular island is taboo, and you go anyway, well, that's on you.  "The Purple Terror" by Fred M. White is another good one, making its debut in The Strand in September 1899.  Set in the Caribbean during the Spanish-American War, Lieutenant Will Scarlett is given a mission to carry a letter from his captain to an Admiral waiting for it across the isthmus.  The trek will involve covering some "fifty miles through practically unexplored country,"  and the trouble begins when Scarlett and his men stop for the night and decide to "join the giddy throng" of people at a bar and Scarlett just happens to notice the "purple band of flowers," the likes of which he'd never seen before, twined around a dancer's shoulders.   He also notices that they have the "perfume of a corpse."  I shall say no more except that had I seen a movie based on this story  on one of those tv shows I used to watch as a kid where they ran back to back science fiction/horror movies, I would have been beyond delighted.

The final story I count among the chilling standouts in this volume is "Three Skeleton Key" by French writer George G. Toudouze.  Although in this day and age elements of this story might come across as old hat, but published in 1937, it had to have been horrific in its day.  The action takes place in a lighthouse on a rock island out in the ocean, where a group of three men are completely happy with their isolated life there,  until one day when they see a ship heading straight toward them.  The ship, it seems, has no crew, but that does not mean that there are not passengers aboard. "Three Skeleton Key" was later adapted for radio,  with the broadcast starring none other than Vincent Price.  You can listen to one of these shows here at Journey Into, but I will warn you that the story is abridged, changed quite a bit, and doesn't quite convey the horror of the situation.  On the other hand, back before television, it must have caused quite a stir sitting in the living room at night listening.

Honorable mention to Jack London's "Good-by, Jack" a rather poignant story disguising the horror that doesn't hit until the very end, at which point I was in shock.

With the exception of "The Fiend of the Cooperage" by Conan Doyle (I just thought it was strange but I wasn't enthralled)  all of the rest of the stories (listed below)  are quite good.  Two exceptions come in the form of futuristic, scifi-ish pulpy tales, "Friend Island" and "In the Land of Tomorrow," simply because I am not particularly fond of this sort of thing as a general rule, although I'm sure they will delight true pulp fans who are.

"The Gray Wolf," by George MacDonald
"The Isle of Voices," by Robert Louis Stevenson (this one made me laugh in parts, actually)
"Dagon" by HP Lovecraft
"The People of Pan," by Henry S. Whitehead
"The Sixth Gargoyle," by David Eynon (mystery writers take note: great plot possibilities here)
"The Isle of Doom" by James Francis Dwyer

"An Adriatic Awakening," by Jonathan E Lewis -- a bit jarring because of moving into modern times, but still a pleasure.

Stark House is one of my very favorite indie presses and I love their crime novels; this is my first foray into the other genres they cover.  Strange Island Stories is delightful and should be a no-miss for readers who love old pulp horror or pulp weird tales;  Lewis has done a terrific job putting it together.