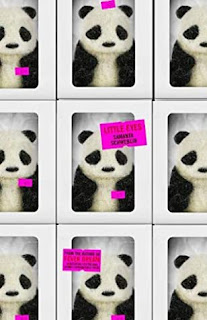 Having read Samanta Schweblin's previous books, it was a no-brainer that I was going to read this one, Booker International longlist or no.  Little Eyes not only examines our infatuation with the latest technology that we feel compelled to bring into our lives, but also shines a spotlight on how it is used and by whom.

At the center of it all is a cuddly, sweet-looking and rather expensive  device called a kentuki.  It comes in different forms, including pandas, crows, bunnies and dragons, looking "similar to a football with one end sliced off," enabling it to "stand upright", with cameras located behind the eyes.  It moves about on wheels, and once the device is charged, the "keeper" (the owner of the kentuki and responsible for keeping it charged), waits until it connects with a "central server," which then links to a "dweller," the person who will be looking out onto the keeper's world through the kentuki's eyes via his or her computer.

Since I don't want to reveal too much, I'll just say that in Little Eyes Schweblin has put together a series of interwoven, related vignettes focusing on keepers and dwellers from different walks of life throughout the world.  As you begin to get hooked on one such story, another intervenes before coming back later with more revelations which in my case I couldn't wait to get to.   And while each has the kentuki at its core, the book turns out to be much more about human nature as she explores the various bonds that form between owner and user,  some of which turn out to be rather sinister, while others have a more poignant side;  here, I am pleased to say,  technology isn't all bad.

Admittedly, the concept of invasive/voyeuristic technology is not a new one but there is just something different here that makes for worthwhile reading.  As the blurb reveals,

but on the flip side, it can also "pave the way for unimaginable terror."   And indeed, most of these tales are tinged with the disturbing weirdness that one expects from this author; there are some moments that made me laugh out loud and then there are elements that were so horrific that I wanted to put the book down.  But I couldn't.

The US release comes out in May from Riverhead, and  although its cover is not nearly as cool as the UK release,  I can definitely recommend it for people who like their fiction a bit more on the darker, weirder side.