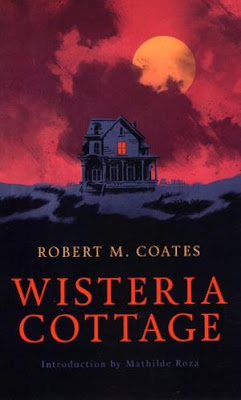 
"I knew there was some way that they could be saved."


It was the second day of Richard Baurie's three-day walking trip in the Long Island Sound area when he first came upon Wisteria Cottage, set among the dunes overlooking the beach below.  It was that moment when,  according to the small bit of the Psychiatrist's Report which opens this novel, "even though faintly," a  "criminal intention" first entered his brain.  There is no clue as to what his "criminal intention" may have been, nor as to why Richard even merits a psychiatrist's report, but it should be apparent at once that we're not dealing with someone psychologically sound here. I have to say up front that Wisteria Cottage is disturbing with a capital D, because from the very beginning the author places his readers into the mind of this young man whose sense of reality is seriously distorted, and keeps us there as Richard's  mind begins to slowly but steadily unravel and deteriorate over the course of the summer spent at Wisteria Cottage.

Richard, who writes poetry and has a part-time job at a bookstore in New York City, has inveigled his way into the lives of  Florence Hackett and her adult daughters Louisa and Elinor.  He'd met Florence at a grocery store, and it didn't take long until he'd "come to have the run of the apartment."   It was on the night before his three-day trip that Florence had happened to mention to Richard that while he was away he might look for  a "nice place" for them to rent for a month or so, offering Richard the opportunity to spend summer weekends with them.   Having discovered Wisteria Cottage, Richard feels that now


"all he wanted in the world, at this moment, was to have them rent the place for the summer, and for him to spend the summer there with them.  It was the right thing, the perfect thing; more than that it was the just thing for them to do."

Being with the Hacketts at the cottage, he believes, would "straighten them out, quell the evil forces that were working among them."

What he views as these "evil forces working among them" I won't divulge and nor will I say anything more about the plot.  I will only add that in his self-appointed quest to "save" these women,  the "summer of pleasant companionship and fun" the Hacketts are expecting will turn out to be anything but as "their relaxing summer holiday will soon turn into a terrifying nightmare."

In her informative introduction which should not be missed but read after finishing this book, Professor Mathilde Roza states that the most "memorable aspect" of Wisteria Cottage is the "approach" taken by the author:  "never hysterical but always low-key," and quotes Commonweal's remark that in this book


"No tiled asylums, no mental bedlams are employed to wring the reader's emotions"

and once I'd read the intro,  I realized that yes, this sentence describes to a tee why I found this book so disturbing.   I've read plenty of fiction that hones in on the disintegration of an individual's psyche, but Richard Baurie's case so unnerved me to the point that I had to make this a daytime-only read.    Professor Roza  also explains how the novel reflects concerns extant in post-World War II America, including "popular culture's deepening interest in psychiatry and psychoanalysis," which is very much apparent throughout the story.

Very highly recommended, but beware -- it took everything I had and several days after reading Wisteria Cottage to get it out from under my skin.  As I said -- disturbing with a capital D.

I also watched the film based on this novel, Edge of Fury (1958), and whoever chose Michael Higgens to play the role of Richard totally nailed it.    It's available on youtube.