The Double Star and Other Occult Fantasies, by Jane de la Vaudère 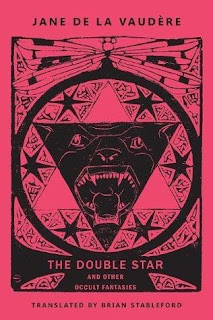 "Those who dream by day have knowledge of a host of things that will remain forever unknown to those who only dream by night. Visions are strewn with fulgurant lightning flashes that, at times, unveil eternity for us and permit us to regain a few scraps of the terrible mystery."

What would we do without Brian Stableford? The man is a lean, mean translating machine, and he has an uncanny knack for uncovering the best work by heretofore unknown authors.  I actually read The Double Star and Other Occult Fantasies some time ago, but recently when someone I know online said he was currently reading it, I decided that I would give it a second read.  I'm so glad I did. It was time.

In his introduction, Brian Stableford shares what little there is to know about Jane de La Vaudère, suggesting that  owing to her family's social status, when as a child she lost both of her parents she was sent to a convent along with her sister to be raised and educated until she could later be married off.   Born Jeanne Scrive, after leaving the convent, she married a military surgeon named Camille Gaston Crapez, who inherited  the Chateau de la Vaudère in Sarthe and began calling himself Crapez de La Vaudère [If anyone is at all interested, there is an interesting (French) blog post in which the author, looking for genealogical information, discovers Jane de la Vaudère quite by accident while researching the Crapez family in Parigné-l'Ėveque].  Before her death in 1908, she had worked as an artist, a poet, a playwright, a novelist, and writer of short stories.  As Stableford also notes,


"a Poesque fascination with what the American writer called 'The Imp of the Perverse' seems to have been a constant feature in the artistry of La Vaudere's literary endeavour, and perhaps her life as well, if what seem to be echoes of her own sentiments in her work really are revealing.  That element of her work made her a significant writer in the development of modern horror fiction, although she is not mentioned in any reference book on the subject."

Let me repeat:   "a significant writer in the development of modern horror fiction,"   yet her work remains relatively unknown.  I say, read this book and you'll want to read everything she's ever written.

In these tales,  as quoted from "The Dream of Myses," the final story in this collection,


"The passions ... all flow from amour, the fundamental law of the world."

I'm not going to go into any detail at all about any of the nine stories in this volume; they are truly best discovered by the reader with no knowledge ahead of time.    To say that the stories in this book are excellent does not quite do them the justice they deserve.  They are  delicious, sublimely written,  decadent and dark, and offer a look at "the scraps of the terrible mystery" as they "unveil eternity." I seriously cannot praise this book enough.  Patience may be required but you will certainly be rewarded for your effort many times over.