The Invention of Morel, by Adolfo Bioy Casares -- a genius novel if ever there was one. 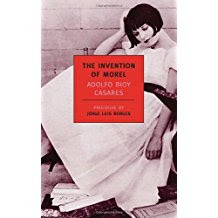 "The habits of our lives make us presume that things will happen in a certain foreseeable way, that there will be a vague coherence in the world."  -- 65


At 103 pages, one would think this book would be a very easy read, but that just isn't the case. It demands a second read (which I did) and probably a third (which I didn't do); its brevity belies the great  depth that the author has brought to this story.

There's not much I can say here without giving away the twist in this book, so this post will be a short one.  Casares has combined a number of different elements here that together don't really allow for The Invention of Morel to be pigeonholed into a single genre -- there are elements of suspense, sci-fi,  metaphysics, philosophy and even romance, so to try to give it a label is foolhardy at best. It is also dark, weird and great all rolled together.

A fugitive escaping from Venezuela with "a life so unbearable" has made his way to an island somewhere in the Pacific. It is a place where Chinese pirates will not go, nor will it ever be visited by "the white ship of the Rockefeller Institute" because it is "known to be the focal point of a mysterious disease."  A group of people had landed there in 1924 and then left it, after having built a museum, a chapel, and a swimming pool. The narrator is completely alone, isolated from the rest of humanity.  But then, everything changes, as he discovers that there are other people on this island.  He takes to watching them as they interact, taking a "certain fascination" in doing so since it had been a very long time since he'd seen anyone at all; he is also worried that they might discover him and deliver him to the authorities.  After a time, the fugitive begins to take the most notice of one of their number, a woman, Faustine, who "watches the sunset every afternoon."  Watching her changes his attitude from one of "nothing to hope for" to its opposite; he decides to make contact with her, risking his freedom in doing so.  It is, as he says, a move that could easily send him back to his past, but he's willing to do it because, as he says, "anything would be preferable to the utter purgatory" he lives in now.  Everything takes off from the point at which he actually works up the courage to speak to her but finds himself ignored, as if he doesn't exist.

To go any further plotwise would involve key spoilers, and if I say any more there wouldn't be a point in anyone reading this book so we'll stop here. Casares poses a multitude of metaphysical questions in this very short work, which, with apologies I also won't disclose for fear of ruining things;  he also makes some interesting social and political observations vis a vis the narrator's interest in Malthusian theory.  Let's just say that it is one of the best and certainly one of the most surreal stories I've ever read, and to say that it was unputdownable would be an understatement.  ARRGGHHH!  It's SO frustrating not to be able to talk about this book because it's THAT good and I want to spill my guts because it is THAT good.  But my hands are tied and my lips are sealed.

oh well. Just read it and you'll see exactly what I mean.
Posted by NancyO at 8:27 AM