The Loney, by Andrew Michael Hurley 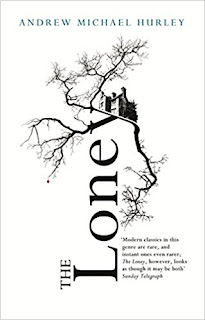 "...there was so little of the modern world there that it was difficult not to think of the place being at a sort of standstill ... primed in some way."


I turned the last page of this novel yesterday evening, and said out loud to absolutely no one "That was a great book."   The big surprise is that it is Hurley's first novel; I say surprise because it is beyond rare that I find a debut so polished and so near-perfect.  The only negative thing I have to say about this book is about its ending, but by then I was already so entrenched in the story and so in love with the writing that  I just did not care.

It was somewhere around page 90 that I noted on my GR status update that what really struck me at the time was how the author set up a number of dualities in this story, and from there they only intensified. Opposing forces are definitely at work throughout this novel,  which is the story related by the narrator about events that happened  thirty years earlier when a small group of Catholic parishioners decided to make a pilgrimage to visit the shrine of St. Anne on the northern Lancashire coast in an area known as the Loney.  The narrator, who we know only as Smith or Tonto, was a teen at the time; he, along with his parents and his brother Andrew, known as Hanny, who had not spoken a word since he was born, make up part of the group. There, Hanny's mother will have him once again drink the holy waters of the shrine; the trip would also serve as a sort of remembrance of the now-deceased Father Wilfred, who would take a group there on retreat at Easter, a tradition "very dear to Wilfred's heart."  Leading the group is Father Bernard, who had been assigned to take Father Wilfred's place.  It turns out though, that Father Bernard's ideas aren't resting well with some of these people, none the least of whom is Hanny's mother, resistant to change, who thinks things ought to be left the way they were.   While Father Wilfred may be dead, he continues to haunt not only this group of people, but the Loney itself as well.     Of course, things don't go as smoothly as planned, not just among the adults, but for the two boys  who become caught up in things well beyond their control and above all, their understanding.

As I said, there are a number of opposites that coexist in this novel, including insiders and outsiders; superstition and traditional practices as opposed to Catholic beliefs; faith and certainty;  change and tradition, and the author uses these to great effect throughout the story, exemplified strongly in the two houses which feature prominently here, The Moorings and Thessaly.

What Mr. Hurley does best, however,  is to translate the very landscape of the Loney into language so that we can visualize it as  "a dangerous place. A wild and useless length of the English coastline," with tides which could "come in quicker than a horse could run..." isolating the small spit of land known as Coldbarrow by making it an island.  Its marshes seem to be aware of one's presence; they are


" a dark and watchful place that seemed to have become adept at keeping grim secrets; secrets that were half heard in the whispered shibboleths that passed from one bank of dry reeds to the other."

There are dunes that cast lengthening shadows, there are "sprouts of marram grass" here; the wind has a number of different voices.  The beach during the rain


"turned to brown sludge, and the dunes ruptured and sometimes crumbled altogether, so that the sea and the marsh water united in vast lakes, undulating with the carcasses of uprooted trees and bright red carrageen ripped from the sea bed."

Most of all though, we come to understand it as a place that hides secrets and one that has its own pulse that beats under the surface.

I could spend days talking about this book because  it is absolutely beautiful in the telling.  There are a number of things that happen here that when put together, combine to create a dark atmosphere that doesn't let up until the last pages.  I'm left with the idea that there are some things for which in the Loney  there are no clear explanations; then again, I think that's part of the point. I loved this book.  Go into it with no expectations, and the book speaks loudly and clearly to you.

highly, very highly, recommended. This is definitely going on my real-world book group's lineup.
Posted by NancyO at 12:26 PM