The Soul of Countess Adrian, by Rosa Campbell Praed 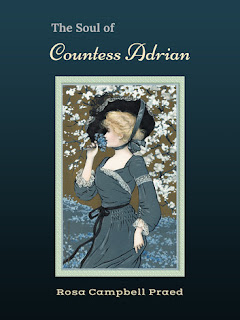 "Soul somehow was the last attribute one would associate with Countess Adrian."   -- 23


This book was meant to be part of my "brain break" after a very full 2017 reading year, but the "brain break" idea sort of backfired.  Not that it isn't fun, and not that it isn't an easy read, but as I discovered, there's plenty of food for thought in this short novel  that takes place among the "upper Bohemia" set in London.  If you google the title, you may find the word "vampire" used more than once, but don't get your hopes up for the blood-sucking variety -- that's not exactly where Praed takes this story.  It is, as my edition's back-cover blurb states, "A tale where love and the occult collide;" the "vampire kiss" is only a part of a much larger picture.

Information about Rosa Campbell-Praed's life can be found here at the website for the National Library of Australia.  In terms of her interest in the supernatural, the article reveals that after she'd married, she and her husband were living on an "almost uninhabited"  Curtis Island, off the coast of Queensland where he owned a cattle station.  Often feeling isolated and lonely, we are told in this article that


"At her lowest and loneliest moments on Curtis Island, Rosa turned to her dead mother for help. The message of hope she received, she recorded in automatic writing ... This was the first step in what was to become, in later life, an almost overwhelming interest in the supernatural in its many forms, from the messages of mediums, the predictions of astrologers, spiritualism, occultism, theosophy, reincarnation, as well as the Catholic religion."

She may be most familiar to readers as the author of the short story "The Bunyip," which has been anthologized several times.


Our story, as I said, is set in the milieu of "upper Bohemia," where


"...mummers, novelists, poets, artists, dilettanti members of parliament, and sensation-hunting visitants from a more aristocratic sphere, made a brave show in the spacious drawing rooms."

It is a place of "at-homes," and it is at one of these gatherings that we first encounter Countess Adrian.  The new girl in town, also at the same gathering is young Beatrice Brett, an American woman and aspiring actress, to whom we are first introduced as she makes the crossing from New York to Southampton.  It is there that she encounters the painter Bernard Lendon, who is taken with her immediately.  These three characters comprise the "He, She, and Another -- the triangle of the human drama!" at the center of this novel.

I don't really want to give away too much of what happens in this book but while it's a fun novel of the occult on its surface, populated with a number of strange characters, in this story it's really about what's happening underneath.   Beatrice (aka Beaty)  is a vulnerable, innocent young woman, with whom the upper Bohemian set is quite taken.  She is a medium as well as an actress with the ability to channel spirits which provide her with "inspiration" for her unscripted performances, during which  Beatrice becomes "unconscious of herself, unconscious of her surroundings."  Beaty's mother evidently shared the same gift, but the "influences" that inspire Beaty drove her mother insane.  As Beaty's uncle reveals, she was an "idle woman," but Beaty's safeguard is acting:  "As long as she keeps real grip on her work she has nothing to be afraid of."  As her uncle also reveals, Beaty has a certain form of  "genius,"


"... the unconscious power of access to the highest influences of the past - a power as rare as are the Talmas and the Siddons themselves. It's the open door through which these bodiless beings from the other side can enter into our world again - the body by which they can vent their unsatisfied cravings and pent-up aspirations." (29)

Beaty at one point reveals to Lendon that she often feels as though she has no soul of her own; that when she is inspired while doing a part, it is


"the soul of someone else which has come in to the help of mine, or has driven mine out for the moment,"

She also knows that any power that she might have as "great actress" would lie in the power of these spirits, "ghosts" as she calls them,  a situation which Lendon compares with the legend of Paganini's violin:


"...Paganini had contrived, by some unearthly arts, to conjure the soul of his dying sweetheart into his violin, and that marvellous (sic) music which the instrument gave out ever after was the wail of the soul eternally imprisoned within it."

Beatrice lives for her art; love is not in the cards for her immediate future and she has no "room for any slighter affection," since she is sure that any man "would be jealous of my Art," and that there would "hardly be space enough" in her life for both.

In contrast to the vulnerable Beatrice stands Countess Adrian. Born in Jamaica, she is the exotic "other" in this case,  a woman whose obvious sexuality, passion and very presence reveal a strength capable of mesmerizing those with whom she comes into contact, and I don't use the word "mesmerizing" lightly. She has a checkered past that keeps her as a hot topic of gossip in the drawing rooms of upper Bohemia; she also has a strange yet personal interest in Theophile Gautier's Avatar, the "vampire spirits" of "Sheridan Le Fanu's story," and the teachings of the occultist Maddox Challis, a friend of Beatrice's family.   In the first encounter between the two women, the Countess, who is  watching Beatrice perform one of her improvisations for the first time, interrupts the spirit flow in a most unusual way, as if she were "quenching the girl's inspiration and forcing her soul back to the commonplace." When the connection is broken, Beatrice suffers a minor breakdown.   Beatrice understands completely that this woman has some strange power over her and asks Lendon to be there for her to stand between herself and the Countess; Lendon humors her and speaks to the Countess, but what Lendon views as "fancy," is for Beatrice a true life-threatening situation.

As Andrew McCann notes in his excellent book Popular Literature, Authorship and The Occult in Late Victorian Britain,  Praed's story can be viewed in part as


"an account of the aesthetic as a background for opposed sensibilities, each a form of possession," (126)

and there's much,  much more going on as well for those who want to explore underneath its surface.  I had  great fun with it both times through. But most intriguing is this: there is a very short line I missed in the first reading,   in one scene where Lendon and the Countess are talking, where she says that she and "this Agnes Adrian had "gone through a good deal together."  It begs the question of not only who or what is this Countess Adrian, but also, if indeed, she ever had a soul.

Readers of gothic, supernatural and Victorian sensation novels will enjoy this book; I definitely recommend it.