The Manuscript Found in Saragossa, by Jan Potocki 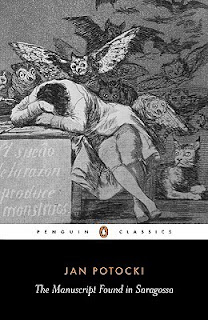 Believe it or not, the moment I turned the last page I wanted to read this book again.  Given its 600-plus pages, that says a lot, and I ended up not rereading it, but I very easily could have.    I loved this book and I loved the people in it, but I spent most of the time in awe of the author's imagination.

I will say right up front that this book will not be for everyone. It can be  incredibly challenging because of the way it is written as a set of stories within stories within stories, which are often stopped and picked up again later rather than just finished at once, which in a couple of cases may require some backtracking. Reader expectations also play a role here.  For example, I was reading Amazon reviews and came across one from a very disappointed reader who said that he was upset because he'd started this book with the expectation of a "fantasy work" but instead ended up with literary fiction.  No comment on that one, but my point is that it's best to just go into it without any preconceived notions, because really, there's so much going on between these covers and so many different literary styles used here that to give it any sort of label would just flat out be folly. As the back cover blurb says, it's "entertainment on an epic scale," and really, that's how I'd approach it.  In short, relax and go with the flow and you will be rewarded.

The novel begins with the discovery of a set of several handwritten notebooks, all written in Spanish. The French army officer who is in Saragossa at the time of its capitulation in 1809 found them, and held on to them. Later, after leaving Saragossa, he is taken prisoner by the Spanish, and stripped of all possessions.  He begs to be able to keep these notebooks, and is given permission by the captain to do so once the captain realizes that this manuscript "contained the history of his ancestors."  The prisoner did much of his time at the captain's home, where the captain translated the work into French, while the prisoner took down every word.  The manuscript, as it turns out, is the story of young Alphonse van Worden, an officer in the Walloon Guards who has been ordered to Madrid.   In trying to find the shortest route, he ends up in the Sierra Morena between Andalusia and La Mancha. It is an area known for brigands, gypsies, smugglers and other bad types, but Alphonse has no fear, and takes no heed.  As he makes his way through the area, he comes across the deserted inn known as the Venta Quemada, and it's here that this tale really begins.  Eventually he will find himself in the company of several others, where they all share their stories.  It is Alphonse's journey through the Sierra Morena and these shared experiences that make up this novel; to say more would just be wrong.

The back-cover blurb reveals that these tales consist partly of "characters transformed through disguise, magic and illusion," and that idea, more than any other, plays out over and over again throughout this book.  One such story made me laugh out loud, but there are spots of humor everywhere. Also found here are stories that date back to the days of Cleopatra, stories filled with arcane and esoteric lore, lots of erotic moments, political intrigue based on historical fact; there are demons, ghosts, and the Holy Inquisition; there isn't a dull moment anywhere.  It truly is "entertainment on an epic scale."  At the same time, I can see a sort of method in this author's madness in the way he tells this story, which I won't discuss here because it would involve spoilers.

It's hard to describe this book in a succinct, general one-size-fits-all kind of way since it is different things to different people.  For example,  as some have said, it can be "an encyclopedia of the dark side of the European Enlightenment," a gothic tale, an "absurd, through-the-looking glass version of Spain under the Inquisition," as one scholar noted (do NOT go to that link until after finishing the book), a kabbalistic text (don't go there either), or a play on Tales From the Thousand and One Nights.  It's very easy to see all of those ideas combined in this book, especially in hindsight, but there are places in my notebook where I've marked instances of all of these and more while reading.

I loved it -- others may not share my experience, but it's one of those rare books that left me with a sense of loss after finishing it, knowing I'd come to the end.  Each and every second with this book was just pure reading bliss.