Thus Were Their Faces, by Silvina Ocampo 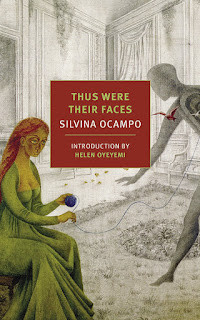 "The people we hate the most are the ones we have entrusted with all of our secrets. When we are in their presence we can't change our soul. They are always there to remind us what we were like."

Just after the introduction to this book by author Helen Oyeyemi, the editors of this volume have  included a brief preface by Jorge Luis Borges in which he reveals that Silvina Ocampo had a "strange taste for a certain kind of innocent and oblique cruelty."  He also says that she has the "virtue" of "clairvoyance," and that she "sees us as if we were made of glass, sees and forgives us"  and perhaps that is a part of why I found this book to be so unsettling, but I think that one of the creepiest things about this book is that quite often, we find ourselves looking at the world from a child's point of view which is surprisingly not quite as innocent as one would think.

Thus Were Their Faces is a compilation of short stories taken from seven of Ocampo's books  published between 1937 and 1988.  It doesn't take long at all to realize that you have landed in a different territory, beginning with my favorite story of this collection, "The Impostor."  While it has a certain gothic flavor, this story of a young student sent for a few weeks to live with a family friend completely draws the reader deeper and deeper into a much darker zone -- that of the human psyche. In truth, a sort of very quiet hum of madness runs through many of these stories, one that isn't quite apparent on the outside but which  slowly makes itself heard the more into each tale you wander.   I'm not going to go into any sort of in-depth descriptions about any of these stories, but in this book, anything can and does happen.  She doesn't spare the cruelty:  murder and death abound in many different and bizarre forms, long-term resentments turn into breaking points that materialize in different guises, and the stories that focus on memory, prophecy, and dreams are not without their deeper, darker edges.  Most are set among venues that in and of themselves are rather mundane and harmless; the challenge presented here is for the reader to occupy the minds of the people who inhabit those spaces, since in the long run, what we see from our outsider-looking-in perspective is completely different from what they see. While we may view what's happening with these characters as strange and bizarre, they want and need us to believe otherwise.  It takes a while to come to this realization, and once you're there, it becomes a rather disorienting reading experience that in my case left me with the feeling of being off kilter during most of my time spent between the covers of this book.

Reading strictly for plot is kind of beyond the point here, so readers who have to have every single thing explained are probably going to be lost and will probably not like this book.  It is yet another work that is a mind-stretching experience for people who want to move beyond the norm and who are looking for something that demands quite a bit more out of themselves as readers -- challenging, yes, but the payoff comes from immersing yourself in some of the best writing ever.  On the back cover of my book there's a brief statement from Borges in which he says that "Silvina Ocampo is one of our best writers. Her stories have no equal in our literature," and he's absolutely correct. While he was referring to writers from Latin America, I think what he says about her stories having "no equal" is absolutely spot on.  It is a beautifully-written collection that will linger on in my mind for a very, very long time.