another outstanding book from Broodcomb: The Settlements, by O. Jamie Walsh 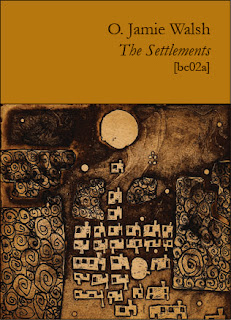 9781999629816
Broodcomb Press, 2018
236 pp
paperback
The Settlements  is set in an area known as "The Peninsula," which, according to Broodcomb's webpage, "abounds in strange tales." It is  a place where "the settlers have found harmony," providing "tales both eerie and shocking" which also explore the "fantastic/everyday meaning of what it means to be human," and I can't begin to express how very happy I was to  be back there again.  One more thing: while the back-flap blurb notes that this book is "plotless and meandering,"  don't believe it.
The narrator of this book is an omissioner, whose function is to "offer an ear," to serve as "a valve for the bleeding of grief or worry," in short, to be available for anyone in the Settlements who needs to have someone to talk to.  Each settlement is different, depending on the "world focus" its population espouses, and the omissioner must be able to adapt himself/herself to all of them.   For example, the settlement of Emotion

"is a place of whiny indulgence, populated by the emotionally incontinent, the adolescent or the theatrical...The inhabitants are interested in how feelings live, how humans live within them and what emotions feel like to be inside"

while the settlement of Fear (one of two the omissioner dreads visiting),  "focuses on visitors" and  which on entering,

"the day darkens, which is less accident of mind or weather but achieved by light-inhibiting screens across which shapes can be projected to become shadows in the shape of raptors or devils when they touch the ground."

The narrator moves through the Settlements, going where needed and describing the places as well as the myriad issues faced by those who need him while also offering his observations on other matters both external and internal, including bits of  "mind-chatter."  That alone would make for great reading on its own, but of course, there's much, much more, with plot threads that appear and reappear, ultimately forming connections.  There's a certain Dr. Krab who has spent time exploring various patterns that lead to a startling conclusion, also channeling strange thoughts,  a murder, a strange "fox boy" with orange fur, a book entitled A History of Dice and Counter Games detailing  some of the strangest  (and macabre) games such as the deadly "Six Gates of the City" and "The Uncertain and the The Beguiled,"  as well as a rather sinister and creepy golf game.  And then there's a chapter from a new Judge Dee book, which, as an aside, I found absolutely brilliant since I  love van Gulik's Judge Dee novels. What is the significance of the number 63?   And just who is the strange and sinister woman who, impossibly, hasn't aged in twenty years but seems to be everywhere?   I haven't even mentioned the dead girl preserved in the "huge specimen jar..."

Plotless and meandering? No way.   The Settlements is carefully and cleverly constructed, falling more on the surreal side than probably any of the Broodcomb novels that have come before, while taking a look at what it means to be human, to feel, and to make connections.     And speaking of those books that have come before, anyone who's read them will quickly notice the intertextual connections made here, especially in the case of The Night of Turns, which, in reality, I'm actually glad I read before this one.  Don't worry -- having knowledge of what happens in any of the other Broodcomb titles isn't a necessity for reading The Settlements.

As was the case with Night of Turns, I found myself completely caught up in the strangeness and the lives of these people as well as the quirky happenings, and The Settlements also affected me on an emotional level.  I was beyond sad when this book was over, a little choked up, and left in a sort of daze just going over it again in my head once away from it.     Once again readers are warned that "This might not be for you," but by this point I know better.