arachnophobes beware (part 3): The Gypsy Spiders and Other Tales of Italian Horror, by Nicola Lombardi 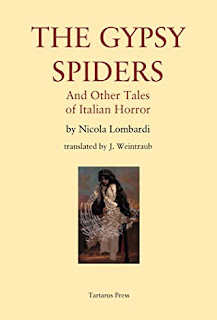 9781912586325
Tartarus Press, 2021
240 pp
translated by J. Weintraub
hardcover
Last year I read the first volume of The Valancourt Book of World Horror, and in their introduction the editors posed the following question to their readers:
"What if there were a whole world of great horror fiction out there you didn't know anything about, written by authors in distant lands and in foreign languages, outstanding horror stories you had no access to, written in languages you couldn't read..."?
It's a very good question; as those editors also stated, "... there's a much larger body of world horror fiction out there than any of us would suspect."    At the end of my post about that book, I noted that it is a true pity that "so much great writing is out there that remains unavailable to an English-language readership."   Valancourt, of course, has a second volume of world horror on the horizon, but I'm beyond delighted that  Tartarus has also opened the window onto that "whole great world of great horror fiction" with its publication this year of Nicola Lombardi's The Gypsy Spiders and Other Italian Horrors.  To Tartarus and to translator J. Weintraub, a huge round of applause for making this book happen.
As Weintraub notes in the introduction to this volume, Lombardi grew up in an area of Italy the author once described in an interview as "a stewpot boiling over with folkloristic legend and dark tales of crime, filling the imagination with nightmares. "  It was also a place where "so very many ghosts" wandered "between fogs and immense desolate spaces, between woods and abandoned farmhouses." A fan of writers such as Lovecraft, Poe, Blackwood,  Bradbury, Fritz Leiber and Dino Buzzati (one of my favorite Italian authors) in his younger days, influenced as well by the stories told to him by his grandparents," Lombardi started publishing his own work in the late 80s.
In 2013 The Gypsy Spiders won "one of Italy's most prestigious awards for horror fiction," the Premio Polidori.  Originally published in 2010, this story (which is actually novel length) begins in  late summer of 1943, the year that an armistice with the Allies had been declared by the Italian government, a move which turned their former German allies into their enemy.  Michele, an Italian soldier now in a hospital in Albania after being wounded, decides it's time to leave the front and go home to his family.   On his return he discovers that his younger brother Marco has completely vanished, his family left suffering from the loss.  As we're told,

"He had lived next to death for months, side-by-side with it, and now that he had managed to escape and find shelter in, for him, the safest and most beloved place on earth, he realised that the horror had only preceded him there, to welcome him home."

But what he hasn't realized is that the true horror is only beginning.

In "Alina's Ring,"  a wounded soldier wakes up to discover himself in a farmhouse, being taken care of by a young woman named Alina.  He notices that "there was something not quite right" in her eyes; and that she "was determined to unburden herself of the thoughts that were cascading through her mind."  As they talk, he's looking for a "way out" -- and about this story I will say no more.   "Sand Castles" finds an elderly man returning to his beloved Villa Dora which he'd been away from since 1945, at age nine.    As Italy was "being rebuilt," his family took him to Bologna, where he'd rebuilt his own life right on through to retirement.  Now in his mind, it is time to go back to the Villa Dora, to give "destiny the chance to complete the plan designed for him."  When he finally arrives, he hears his old childhood pals "calling out his name..."   Weintraub notes that in these stories, it's "the actuality of the war and its aftermath that lead to madness, obsession, and significant 'collateral damage'," and in these three stories, all of  these elements scream loudly from the page.

Six incredibly dark stories remain in this volume, nearly all of which are gut-level disturbing and much darker than I normally tend to go in the realm horror fiction, but god help me nothing short of a bomb blast in my living room would have made me put the book down while reading them.    I'll mention two here.  First, "Professor Aligi's Puppets," in which a young boy's fascination with puppet theatre takes a turn into nightmare territory, and "Striges," my favorite story in the book, which thoroughly chilled me to my bones.  In that one, a man looks  back in time to recall something he'd witnessed in his childhood that left a "kind of knotting" in his stomach (a similar reaction to my own with each step of this story, by the way) when he thought about his friend Francesco,  the "prisoner of a situation so horrible its true nature could hardly be fully understood."  As kids, Francesco and his friends were fascinated with spiritualism, flying saucers, divination and "on and on," fueling their imaginations with comic books, television, horror novels,  movies etc.  The trouble begins when Francesco reveals to his buddies that his mom is writing a "study on witches," and would be going on a trip throughout Europe.  As the narrator recalls, the boys got a bit of a charge over that, knowing that "whatever she might bring home would launch us further off the face of the earth," before offering his observations in hindsight that "she would be bringing us the burial, once and for all, of our childhood, and much worse."

These are stories which demand more than just a quick read through, and which also need to be pondered on many levels.  While they are extremely disturbing, these stories reveal a major depth of insight into human nature on the author's part, as through his writing he makes very clear that, as noted in the introduction,  the source of evil can often be seen to stem from the "individual and collective hearts of men and women."  He doesn't have to resort to old, well-worn and tired tropes for cheap thrills here that quite honestly turn me off --  Lombardi offers his readers an eerie but sophisticated blending of the "uncanny and otherworldly" that slowly seeps not only into the lives of his characters, but under the skin of his readers at the same time.
Absolutely brilliant and very, very highly recommended.  And Tartarus people: please consider more translated works in the future ... they would be very much appreciated.
Posted by NancyO at 1:44 PM