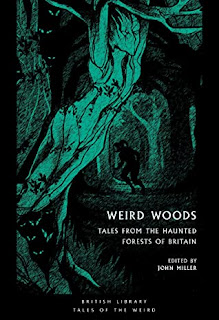 9780712353427
British Library, 2020
238 pp
paperback
I've gushed many a time over the books in the British Library Tales of the Weird series over the last few years so I won't do that here -- suffice it to say that I've never been disappointed with any of these books and my current read,  Weird Woods: Tales from the Haunted Forests of Britain, is no exception.  The editor, John Miller, is also responsible for one of my favorites in the series, Tales of the Tattooed.  This time, however, he turns to

"tales of whispering voices and maddening sights from deep in the Yorkshire Dales to the ancient hills of Gwent and the eerie quiet of the forests of Dartmoor."

No teddy bears' picnics here; instead there are twelve tales which celebrate "the enduring power of our natural spaces to enthral and terrorise our senses."

The names listed in the table of contents are familiar to any aficionado of strange or ghostly  tales from yesteryear, here ranging from the 1880s through the 1930s.  Aside from Arthur Machen's "N" which I will gladly read any time, two stories top my list of favorites: E.F. Benson's "The Man Who Went Too Far" and Algernon Blackwood's beyond excellent "Ancient Lights."  The first is set in the New Forest of Hampshire, where one "gets the sense that many presences and companions are near at hand."  The people of the village of St. Faith's know well enough not to "willingly venture" there after dark since

"it seems that a man is not sure in what company he may suddenly find himself..."

Indeed, it may be the ghost of a young artist, recently deceased, haunting a "certain house, the last of the village, where he lived."  But this is not a haunted house story by any stretch; it seems that the artist, a certain Darcy, has been engaged in "the deliberate and unswerving pursuit of joy,"  but what starts out as an ode to the blissful wonders of the natural world soon takes a darker turn.    Spending years communing with nature, it is his belief that will ultimately become one with it -- and then he hears the "sound of life," aka the pipes of Pan.   At first fearful, he eventually comes around; now, as he tells his friend, there's one more step -- a  "final revelation."   Lots of covert subtext in this story, and it's truly one of the best in the book.  There is also much to discover in Blackwood's "Ancient Lights," which highlights one of the main themes in much of his work -- the insignificance of humans among the towering presence of nature.   A surveyor's clerk looks forward to a "day of high adventure" as he enters a "copse of oak and hornbeam" near Southwater, Sussex, and gets that and more as well.   The owner of that wood has decided to cut this area down for a "better view from the dining-room window," and the clerk is there ahead of the project.   The trees, though,  have other ideas.
I came across three stories new to me. First, "An Old Thorn," by WH Hudson, set in the South Wiltshire Downs focuses on a tree described by the editor as "the Satanic double" of the famous Glastonbury thorn.  This particular tree has a very long memory, forgetting absolutely nothing, no matter how much time has passed.   Next is the atmospheric, very nicely told "The White Lady," by Elliott O'Donnell, represented as a true story by the narrator, who as a boy decides to hide in a tree one night to see the infamous White Lady of Rownam Avenue.  He gets much more than he bargains for.  Last but by no means the least of these, in Mary Webb's "The Name-Tree," it is said of the name tree that if it dies,"you die. If you sicken, the tree withers. If you desert it, a curse falls."  After seeing the "real, vital savage passion" young Laura has for her much-beloved cherry orchard, the site of her name tree, the new owner of Bitterne Hall laments that it's all wasted on nature.  It seems that he too has developed quite a passion, not for nature but for Laura.  He offers her a deal as a way to keep the house, the orchard and her name tree, but there will be a cost.  So very good, but oh, so harrowing at the same time. As the editor reveals, this is a story in which "patriarchal authority" is "painfully amplified among trees."
The remainder of these stories in this volume  I've read before -- Edith Nesbit's "Man-Size in Marble," "The Striding Place," by Gertrude Atherton, "He Made a Woman --," by Marjorie Bowen, "The Tree," by Walter de la Mare, and "A Neighbour's Landmark," by M.R. James -- but no matter, since all are well worth reading again.
As Miller notes in his introduction,

"Haunted woods are places where narrative and environment are merged, where the imagination and landscape are rooted together,"

and this theme as well as others runs through each and every story in this book.  In some cases the idea of "woods" might seem a bit stretched, but it didn't matter to me.   Just reading these tales brought back many moments I've spent in forests both day and night, remembering all of the creaks and groans of the trees, the crackle of movement by woodland creatures, and the sense of being in an unworldly place where the sky is hard to see through the canopy.  Recommended mainly to those readers who, like me, love these older creepy stories from the past, and to those readers who are fans of the British Library Tales of the Weird series in general.     Don't miss the introduction (but do save it until the end), and be sure to check out the cover art as well.

I'm now psyched for a cool day and a hike through the woods -- and for whatever I may encounter there.