The Night of Turns, by Edita Bikker* 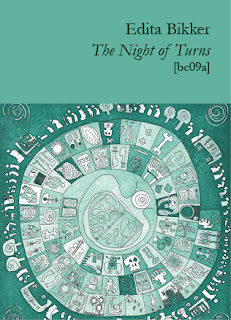 978199629847
Broodcomb Press, 2021
184 pp
paperback
Another stunning and truly sublime book from Broodcomb, The Night of Turns is unlike anything I've read before.  It's very likely that I'll never read anything like it again, so I feel extremely fortunate to have a copy.  As it stands, Upmorchard (which I read earlier), has sold out completely, so yes indeed I feel lucky that I bought my books when I did.
The blurb states that

"The Night of Turns" is a narrative of folk horror, a record of the author's experiences in a land where theatre is used as a weapon, and lives are forfeit in a sinister game of spiritual roulette. "

And, as the usual Broodcomb warning states,

Oh, but it most certainly was for me, from page one on as Edita, who narrates this story, crosses "the border" from the settlements into another place altogether via a tunnel.  She encounters a man who asks her the name of her caravan, and discovering she is alone, tells her that she needs "to belong somewhere."  As she makes her way through a number of wagons on the path, she decides to go with the Caravan of Burnt Women, where "no one's turned away." She is welcomed by these travellers, from whom she learns that the number of hours they walk each day is determined by "the game."  It seems that "everyone engages with the game," with the travellers each taking their turn at different intervals, the game never stopping.    The caravans never stop either, traveling a defined circuit with designated resting points along the way.   While each of the caravans is different from the other, they all fall under the aegis of a strange entity called The Beekeeper.
When the caravan comes to the end of its determined hourly travels, if there happens to be another Caravan at the same stopping place, then a "Night of Turns" is called for, in which members of each of the two regales the other with bizarre entertainments.  These are far from relaxing hours of funtime or escape; they are, in fact, deadly serious, nightmarish with purpose.
As Edita becomes more entrenched with the Caravan of Burnt Women,  she observes, questions and falls into daily life  with other members of this group, but it becomes  clear after a while that her travels with the caravan have ultimately become parts of her own inner journey.
The above is just an uber-brief synopsis, because a) I could never do full justice to this novel and b) if I say much more it will detract from potential readers' enjoyment of  this book and that would be a crime. It is also difficult to pigeonhole this book --  "folk horror" just isn't enough of a label to categorize it.   In The Night of Turns, the author has created an intense and completely-actualized world that incorporates among other things mythology, esoteric knowledge, magic and the fantastic; at the same time, he keeps the reader drawn into and completely engaged with the story with his strong, realistic  characterization.  There are several places where the author introduces somewhat puzzling utterances and  events that seem to come out of nowhere, only to be taken up later on where the context is more fully understood, creating a richness of depth to the narrative  as it continues to expand.  There is also an ongoing sense of foreboding and downright nightmare as you make your way through this novel, with a sense of unseen horrors and the uncanny always nearby,  leading to much page turning and a tension that takes root in the mind and body and won't let go until the end.
This is my third foray into the phenomenon that is Broodcomb Press, and jeezus H., if these three books are representative of the future output of this publisher, I'll be one of their best customers as long as they keep producing.    I most strongly recommend this novel -- as I said, it is like nothing that's come before.  And that's a very good thing.
*and Jamie Walsh
Posted by NancyO at 8:00 AM