The Villa and the Vortex: Supernatural Stories, 1916-1924 by Elinor Mordaunt (ed.) Melissa Edmundson 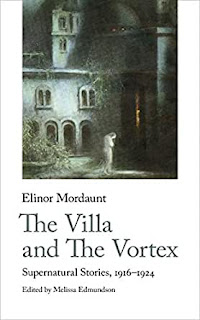 9781912766420
Handheld Press, 2021
306 pp
paperback
Melissa Edmundson is the editor of two volumes of weird stories of yesteryear written by women, Women's Weird: Strange Stories by Women, 1890-1940 and Women's Weird 2: More Strange Stories by Women, 1891-1937.  I have both of those books (and I'll be reading at least the first volume this month),  so when I first heard about this one, I made a quick hit on the preorder button.  I was not at all disappointed; in fact, reading The Villa and The Vortex gave me hours of pleasure.
From the editor's introduction:
"Elinor Mordaunt is responsible for an eclectic and wide-ranging output of supernatural fiction that rivals the best writing by her contemporaries.  Yet in the decades following her death in 1942, Mordaunt was neglected and largely forgotten as an author, her work omitted from the subsequent anthologies that helped to ensure the reputations of fellow writers."  She continues, saying that "This major voice within the supernatural genre has been neglected for far too long, and it is time that her work returned to a wider audience."  As the editor also notes, "Mordaunt's short stories showcase a variety of otherworldly, supernatural entities as she drew inspiration from folklore, myth, legend, and history."   Most definitely my kind of book and my kind of writer.
While  I won't be going through every story here, I will shine a light on my favorites, beginning with  "The Weakening Point"  from 1916, which opens this collection.    While birthdays are normally occasions for celebrations, it seems that for Bond Challice, they are met with a most particularly horrific and recurring nightmare. The situation has been ongoing since his first birthday, and every year since then, the approach of the day causes him abject fear, which in turn leads to outright paralysis.  It's more than crippling: his terror  prevents him from living life to its fullest and leads to changes to his personality.  His parents are in complete despair, having watched him suffer; as his father says at one point, "A Challice -- the last of all the Challices -- to go to hell for a dream!"  Tension builds slowly in this one, and by the time Bond decides it's time to face his fear, well, I don't mind saying that I was on the edge of my chair.  Jeez, I wish I could say more about this one, but all I will reveal is that the ending tipped this story into the weird zone for sure.    My vote for most frightening story in this volume is "Luz," from 1922, which is set in London and begins with a young woman with a strange dislike and fear of a particular blind man who passes by her flat at a regular time each night.  Normally, she says, she has always felt "acute sympathy" for "all who are maimed and defrauded; above all for the blind," but there's something in the "tap-tap of his stick" that sets her on edge and makes her run for home to ensure that she's inside before he walks by her flat each evening.   She's never seen the man, but she is curious about where he goes each time, for some reason convinced that he

" reached the scene of his day's labours -- pleasure, solicitation, whatever it might be -- by some altogether uncanny means; that his every action, his whole life, indeed, was nefarious."

One February night she finds herself coming home from a tea party, "enveloped by a thick yellow fog," and becomes turned around, completely lost, when a stranger she can't see offers help; it's then that she hears the familiar "tap-tap" next to her.   Let me just say that I thought I knew what was going to happen here, but as it turns out, I was not only wrong but I would never have guessed it in a million years.  The bizarre, disorienting travels through foggy London streets add even more of a chill to this story, which would be a superb addition to any collection of weird tales.

Two haunted house stories made my favorites list as well:  "Four Wallpapers," from 1924, is set in Tenerife, where a couple who had bought a house sight unseen are discouraged by the lack of progress the local workers have made by the time they arrive,  even though they'd been sending regular payments for the work.  Mrs. Erskine decides that she'll have to buckle down and get things done herself; for Mr. Erskine it's all too much so he spends most of his time in the local hotel.  He particularly hates the wallpaper, but his wife promises him it will all be gone shortly.  But even as she's starting to strip it away, she becomes utterly fascinated as the house begins to spill its secrets, layer by layer.    "The Fountain" (1922) features a house that becomes haunted over the course of the story, but what elevates this one is the author's incorporation of ancient nature beliefs into the story.  "The Villa," the final story,  is also not your typical haunted house -- here, as Edmundson notes in her introduction, Mordaunt describes this villa in Croatia as a "sentient being: hating, revenging, waiting."  The original owner of a beautiful house in Croatia falls victim to a death wish, so that another owner might take possession of it.  The house, however, isn't happy about the change in ownership and takes its revenge over the next few generations.

Although I've only offered a very brief sketch, all of the stories in this volume run psychologically deep and often hit at the very souls of her characters.    The ones I didn't mention in this volume are also quite good, and I'm not at all surprised that Mordaunt's stories, as the editor notes, were "favourably compared" to those written by Algernon Blackwood and HG Wells.  What is surprising is that Mordaunt is so underappreciated with her work rarely appearing in anthologies, because her stories lend themselves so  nicely to any number of different facets of the supernatural and the weird.  Save the excellent introduction for last but do not pass it by -- I'm always amazed at the depth and breadth of Edmundson's research and knowledge.  From haunted houses to haunted people, Mordaunt's work is very well done, highly intelligent, and I'll go so far as to say a definitely must-read for readers of older supernatural tales, especially those written by women whose work has long been "very much underacknowledged."  Highly recommended.