The Dangers of Smoking in Bed, by Mariana Enriquez 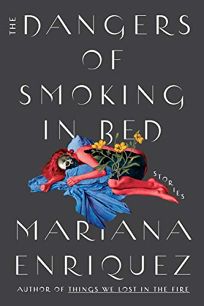 9780593134078
Hogarth, 2021
originally published as Los Peligros de fumar en la cama (2017)
translated by Megan McDowell
187 pp
hardcover
I had picked up this book this past January, long before it was longlisted (and then shortlisted) for this year's International Booker Prize.  There was never a question of not buying it;  I had read and loved this author's Things We Lost in the Fire some time ago.  That book was excellent, with a slight edge over this one, but after finishing The Dangers of Smoking in Bed I was not only impressed, but my first reaction to this book echoes exactly what Lauren Groff says about it on its back cover:

"After you've lived in Mariana Enriquez's marvelous brain for the time it takes to read The Dangers of Smoking in Bed, the known world feels ratcheted a few degrees off-center."

It didn't take until the end of the book for that "off-center" feeling to take hold -- after the first story alone I had to stop, think, and sort of shake my head back into the real world before moving on.

In an interview after the publication of Things We Lost in the Fire, the author noted that her stories

"are quite rooted in realistic urban and suburban settings and the horror just emanates from these places,"

and in The Dangers of Smoking in Bed the author examines the darkness and the terrors that co-exist in "these places" side by side with every-day life --  as one character says so eloquently in "Rambla Triste" (one of my favorites in this book), "the incarnations of the city's madness."  Most of her characters are women from adolescence upward,  their daily concerns are normal, including appearance, sex, relationships, family, drugs, and so on.  It isn't too long into any of these stories however before it dawns on you that you've made your way into a situation where normal has taken a bizarre turn.  In "Our Lady of the Quarry," for example, a group of girls all hanker after the same guy who doesn't seem to notice them in the way they would like; they are jealous of their "grown-up" friend Silvia ("out of high school for two years") whom Diego does notice. A typical scenario, to be sure, but what one girl does in trying out  "an infallible way to snag your beloved" provides the spark for what comes next as the story moves into the realm of the eerie.  Elsewhere, a girl digging in a garden unearths bones that turn out not to be those of an animal as her father had told her; a young girl who looks in a well at the home of a "witch" becomes stricken with paralyzing agoraphobia; a homeless man who is turned out of a neighborhood leaves behind a terrible curse; gentrification leaves homeless ghosts walking the streets of Barcelona; two teenaged groupies take the words of their favorite singer to heart ... and more.

Nothing is out of bounds here -- fetishes, voyeurism and cannibalism included -- but as the dustjacket blurb says, the stories are written with "resounding tenderness toward those in pain, in fear, and in limbo."  They  also reveal a concern with economic and social inequality as well as Argentina's inescapable past.  Two chilling stories in particular (which also happen to be my top two favorites) also highlight the anxieties of the period of the Dictatorship (1976 - 1983):  "Kids Who Come Back," in which a woman who maintains the archive of lost and disappeared children begins to notice an unsettling trend in Buenos Aires, "this city full of ghosts," and "Back When We Talked to the Dead"  centering on a group of five girls who spend time with their Ouija board as a way of asking the spirits about their relatives who had been disappeared.  Violence and ghosts go hand in hand in this book.

I read a lot of supernatural and weird fiction but not a lot of what I'd call  horror, but if more writers in the genre did it like Mariana Enriquez, I could easily go that route as well.  Here the terrors leave in their wake a "city of ghosts" and women doing what they must to find stability in their unstable, even haunted surroundings.  With the exception of "Kids Who Come Back," the stories are relatively short which, in my opinion, gives them an incredible measure of power.  Whereas some readers have noted that the stories felt underdeveloped, I disagree.  I don't need everything explained to me -- each story made an impact as is.   Enriquez's work is original, fresh, modern and above all powerful, and while not all of these tales were to my personal taste, overall this is a stunning collection that should not be missed, except perhaps, by the squeamish.