The Cormorant, by Stephen Gregory 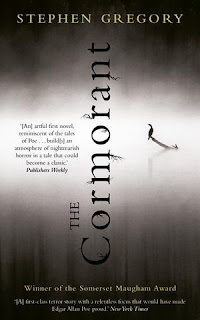 9781912681693
Parthian Books, 2021
originally published 1986
160 pp
paperback (my e-copy sent by the publisher, to whom I owe my many and grateful  thanks)
Recently reissued by Welsh publisher  Parthian Books just last month, Stephen Gregory's The Cormorant (1986) is exactly the sort of dark fiction I look forward to reading, in which the weird makes its way into regular life making it difficult to decide whether there is something supernatural at play here or if it's something else altogether.  I first read this book seven years ago when it was published by Valancourt,  and that was the question I was left with at the time;  after finishing this time around, the ambiguity remains.  Added to the uncertainty is the fact that we have only the narrator's word to rely on for what happens here.  My kind of book indeed.
Winter in Northern Wales provides the natural backdrop to this story that begins when a man is bequeathed a cottage in a Welsh village "nestled under the cloud-covered summit of Snowdon, on the road between Caernafon and Beddgelert."  He  and his wife Ann were able to quit their teaching jobs in the Midlands, affording him the opportunity to devote time to the history textbook he is writing. She has a job at a local pub and he tends to their eleven-month old child Harry while she works.   The cottage had belonged to his Uncle Ian whom the (unnamed) narrator had not known very well, and it comes with the "binding condition" that the cottage was theirs as long as they took care of the cormorant Uncle Ian had rescued some time earlier.   To the narrator, the bequest is a "thunderbolt of good fortune,"  and he wasn't too worried about taking care of the cormorant, but when the bird arrives and its crate is opened, the "some kind of placid, domestic fowl" they'd been expecting turned out to be anything but.   In the middle of a quiet, lovely, warm domestic sort of perfection, as he notes,

spewing feces and urine everywhere and causing destruction to their otherwise cozy environs.
Ann, who "shuddered at the sight of the cormorant's demonic arrogance," sees the bird (which the narrator calls Archie)  as menacing, while baby Harry seems to be enthralled with the thing.  The narrator works to exert dominance and control over the bird, mentioning more than once Archie's dependence on him for its survival; at the same time it's obvious that while he's completely obsessed with it,  he has a sort of love-hate relationship with this cormorant,  referring to it once as a "Heathcliff, a Rasputin, a Dracula."  In the meantime, Ann becomes further unsettled because of her husband's increasingly strange behavior and Harry's growing fascination with Archie.  Then there's the matter of the narrator's brief (hallucinatory?) encounters with someone who leaves behind cigar smoke -- is this some sort of haunting, some sort of possession, or is there more to it,  perhaps grounded in more earthly concerns?
The flaws in the characters begin to appear early on, but then again, we're watching this story unravel from the point of view of the narrator, whose choices throughout the narrative are just mind boggling.  One of the highlights of this novel is Gregory's purposeful, highly-controlled and taut writing style which allows for him to  adeptly turn  up the volume little by little on the slow-building horror that fills this book,   and in my case at least, setting forth an eerie atmosphere from the moment the bird's crate is opened in the cozy living room, offering its entrance as a harbinger of dread and doom.
I won't deny that there are some extremely disturbing scenes in this book (including one especially beyond-squirmworthy event that takes place in a bathtub which is mentioned in pretty much everyone's review of this novel and got a serious and out-loud WTF from me as well), but in a sick way they accord with the narrator's increasingly-disturbed state of mind, which is in my opinion is at the heart of this novel.
I cannot for the life of me say why, but as disturbing and horrific as this book is, I absolutely loved it. I found, as the author says in the introduction to this novel, that

"Like the bird, the book is beautiful and ugly, intriguing and upsetting, appealing and appalling, in its different, changing moods."

The Cormorant is not only effective as a horror story, but as literary fiction with a weird bent as well. The ambiguity here left me thinking about it long after I'd finished, going through evidence in my head for both the psychological and supernatural.  Writing it down now, I'm still thinking about it.  I cannot recommend this novel highly enough, although on many levels it is a difficult read, so beware.

Once again my many thanks to the very good people at Parthian.