Mist and Other Ghost Stories, by Richmal Compton

Good grief. The last time I posted was in February; since then it has literally been one thing after another with what seems like very little breathing space in between. That doesn't mean I haven't been reading -- au contraire, I've actually read a lot as a sanity-saving measure.  Mist and Other Stories is just the latest in a lineup of some pretty awesome books, so I'll begin with this collection of supernatural/ghostly tales, which, while perhaps not the most hair-raising stories I've ever encountered, are certainly compelling enough that I  read them all in one sitting.  Here you'll find ghosts, as promised, along with haunted houses, haunted people, and more. For those readers of the dark who love older supernatural tales, it is  no-miss read;  for me there's also the added bonus of discovering a new author in the genre. 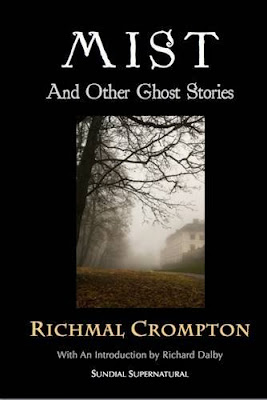 9781908274281
Sundial Press, 2015
originally published 1928
191 pp
hardcover
As if to signal that this will be no ordinary book of ghost stories,  the first two entries, to my great delight, are inspired by the figure of the Great God Pan.   In the opener,  "The Bronze Statuette,"  a "modern" but somewhat shallow sort of young woman ("she had become engaged to Harold Menzies simply because his dancing step and his game at tennis suited hers") at a house party undergoes an unexpected and extraordinary change after the host's father brings out a small bronze statue, "a thing of extraordinary grace and beauty."  Following that one is  "Strange," which also takes place during a house party, where one of the guests, "a chap called Strange," enchants the others with his presence as well as his syrinx.
No ghost story collection would be complete without a haunted house or two, and what Crompton has on offer here strays a bit off the beaten path in that area. For example in "Marlowes," a woman who, along with her husband has left her home and is staying in a hotel while repairs are being made, confides to another guest that they love their Sussex house, but for a while there it didn't love them back.  Of course, "there's a story about that."  A full tank of petrol would have prevented the happenings at "The House Behind the Wood,"a personal favorite,  in which a threesome find themselves stuck in the cold night "six miles from anywhere."  Frank, married to the "fragile and delicate" Monica decides that sleeping in the car would likely bring on a case of pneumonia, but luckily for the couple and Frank's childhood friend Harold, there is a house nearby with a light shining in the window.  The caretaker has no petrol, but he does offer them a place to stay out of the cold. Let's just say that Frank blames what happens next on a nightmare, but oh Frank, it's not the drains that are causing it.   "The Haunting of Greenways" is another favorite in which the actual spectral visitation begins about ten pages in, but the events leading to that point are really the main show, centering on a young woman who is incapable of true happiness and  "had that gift for self-torture that belongs to the mentally unbalanced."  The title  story in this book is the last but by no means the least; I thought it was one of the best in the collection.  "Mist" finds a hiker who has lost his way in the "bleakest part of the moor" and luckily finds his way to a small inn for the night.  Surrounding and stranding him is the mist, "like something sinister and malevolent."  After boredom and cabin fever set in toward tea time, he decides it might be good to get out and go for a walk. But wait -- what's that "dull light flickering in the fog?"
Of the remainder, three are well worth honorable mention: "Rosalind," "Harry Lorrimer, and "The Oak Tree,"  the first two of which are excellent and the third entertaining.    In the first, a young artist is haunted by his passion after he dumps the woman he loves for someone more suitable for marriage; the first vows that she will never let the second have him.  In the second, two old school friends, Gregson and Harry Lorrimer, meet by chance, and after a visit to the home of Harry Lorrimer, his friend makes a chilling discovery.  Gregson feels uneasy about Harry, but the uneasiness soon turns to sheer horror when he learns what's really happening with his old schoolmate.   Finally, "The Old Oak Tree" is the last of its kind, sitting in the yard of Bletchleys on "prehistoric land" where Druidic worship may have once been carried out.  Indeed, an old flat stone lies at its base;  Mr. Fellowes informs his wife that it was likely used for human sacrifices, but  Mrs. Fellowes  feels sorry that no one worships it now, and promises it a garland a day.  Sure enough, she keeps her word and the oak tree begins to take on a "new lease of life," which Mr. Fellowes doesn't necessarily like.
Crompton's characters range from wronged women to people haunted by their pasts, including ghosts who aren't quite ready to give up the pleasures they had in life; her stories occur mainly within the framework of upper middle-class existence  where strange events have the potential to disrupt an otherwise comfortable life. Her real focus here though (for the most part) seems to be on the people themselves, taking her time to develop her characters just enough so that what leads up to the supernatural happenings is well understood by the time you actually get there.   Above all though, she excels in atmosphere -- not simply in natural world phenomena (which is itself so well done that in the last story, for example, you can actually see and feel the clammy fingers of mist in the forest) but also in the way she ever so slightly ratchets the tension experienced by her characters in the midst of uncanny events.
Mist and Other Ghost Stories is a fine example of ghostly tales done in an original fashion and done well.  While not every story is perfect, it is still a collection that I would most wholeheartedly recommend.
Posted by NancyO at 8:41 AM