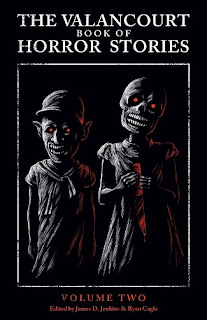 This will be my 28th post about a book from Valancourt Books, and there is a reason why so much of my reading material comes from this small press.  Michael Moorcock says it so perfectly:

"They have made it their business, with considerable taste and integrity, to put back into print a considerable amount of work which has been in serious need of republication.  Their list has been compiled by editors who know their stuff, bringing back into the light a raft of books, I, for one, have been waiting years to read! If you ever felt there were gaps in your reading experience or are simply frustrated that you can't find enough good, substantial fiction in the shops or even online, then this is the publisher for you!"


They know I love and appreciate their work, so without further gushing on my part, on with The Valancourt Book of Horror Stories, Volume Two.

The fourteen stories in this book are some of the most unsettling, disturbing, and chilling tales from yesteryear that I've ever read, and I don't know whether it was done purposefully or not, but it seemed to me that with each story there came an increase in the level of intensity.  The first story, Bernard Taylor's "Samhain," for example, has quite a bit of the dark-humor vibe, and actually made me laugh, but by the time I reached the end of the last story "The Boys Who Wouldn't Wake Up, " by Stephen Gregory, I was on the edge of tears.  I can't really explain it very well, but it feels like the Valancourt guys upped the horror ante with each tale as it appeared in this collection.

The stories are as follows:


"Samhain," by Bernard Taylor
"The Bell," by Beverley Nichols
"The Elemental," by R. Chetwynd-Hayes
"Herself," by M.E. Braddon
"The Creatures in the House," by Robert Westall
"November the Thirteenth," by Russell Thorndike
"Halley's Passing," by Michael McDowell
"The Nice Boys," by Isabel Colegate
"The Watcher by the Threshold," by John Buchan
"Tudor Windows," by Nevil Shute
"No Sin," by John Metcalfe
"The Dice," by Thomas De Quincey
"Camera Obscura," by Basil Copper
"The Boys Who Wouldn't Wake Up," by Stephen Gregory

Normally in a collection such as this one, I would expect even one story that is not so great, but that just isn't the case here.  Each and every tale is top notch, so when you put them all together, you end up with a symphony of absolute reading perfection.   And while I won't go through each and every one here, there are a few stories that really stood out for me.  First, "Herself," by M.E. Braddon, in which a young woman's lovely inherited villa with the name of The Orange Grove seems the perfect place for her to rest and recuperate from her illness, despite the warnings she gets from those in her close circle.  While it's not haunted, exactly, it does have a certain reputation...  The one that actually made me stop reading for an entire day is Michael McDowell's "Halley's Passing," which is frightening enough as the story progresses, but its true horror doesn't hit you until the last two paragraphs. McDowell is a genius writer as it is, but he gives us something very different here, something completely unexpected.  It's one I'm happy I read during the daylight hours, let's just put it that way.   My favorite story in this book is Basil Copper's "Camera Obscura."  In their brief blurb about the author that prefaces the story, the editors say that it "is perhaps one of the most outright chilling tales in this volume," and I certainly won't disagree with them.  A moneylender who has gone to collect what he is owed from a rather eccentric gentleman gets way more than he ever expected in return.  When I stopped to think about the implications of this story it became so disturbing that I had to put the book down once again.  This is one of Copper's earliest stories, first appearing in the Sixth Pan Book of Horror Stories, and it was adapted for television as a 1971 episode of Night Gallery.   "The Boys Who Wouldn't Wake Up," by Stephen Gregory is simultaneously eerie and poignant, a beautifully-written tale of a young boy who is left only with his school's headmaster for company during the Christmas holidays.   As I said earlier, this one had me on the edge of tears, and it is hands down the most haunting story in this book, in the truest sense of the word.


It's not all that often that I truly fall in love with a book, but I certainly did here.  Valancourt just keeps getting better year after year, and as I said to the guys in my goodreads post, they have completely outdone themselves with this one.   Bravo, Jay and Ryan -- this is the most stunning collection you have ever published.