HR #3: One Thousand and One Ghosts, by Alexandre Dumas 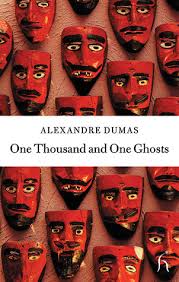 I actually killed two birds with one stone reading this book, since I discovered that it's the same book as The Horror at Fontenay, which I bought because it appeared in Wheatly's Library of the Occult.  The cover of Fontenay is a bit more reflective of what goes on inside this book than that of the Hesperus edition, although to be sure, not everyone in it ends up minus a head.


Departing from his host's hunting party, the narrator of this book takes it upon himself to  "beat a retreat," setting out on a path that would take him to the village of Fontenay-aux-Roses.  As he's strolling along, he can't help but notice a man with a "fixed and lifeless" stare, "clothes in disarray and his hands spattered with blood."  Our narrator is intrigued enough to follow him as he presents himself at the home of the mayor, Monsieur Ledru, proclaiming that he's just killed his wife and he wants to give himself up. The mayor, the police superintendent, and the doctor insist he return with them to the scene of the crime, but the man is beyond reluctant -- it seems that after he'd killed his wife by chopping off her head, not only did the head  speak to him, but it also proceeded to bite his hand.  Later that day, a small party gathers at the home of M. Ledru, where the events of the day are still on everyone's mind.  A discussion begins around the question of whether or not a severed head continues to have "consciousness of feeling," moving on to "the persistence of life" after death.  Ledru reveals that earlier in his life, he'd become "obsessed" with the belief that the severed heads of the aristocrats who'd met their fate at the hands of the executioner were in fact, still alive, and proceeds to tell his guests about his own experience, launching into the story of "Solange."

I'd just read "Solange" in The Dedalus Book of French Horror, but I had no idea that it originally came from this book. Shame on me for not having done my usual homework.  So now, I'm really intrigued, thinking that  if this collection starts with that story, then I'm in for a really good time here. I was not disappointed.

Ledru's tale sparks the question of whether his experience was real or hallucinatory; it also begins a series of stories told by everyone present except the narrator, who turns out to be Dumas himself. Each time a story is told, one of the group presents his or her own strange experience, prompting another round of theoretical discussion before the next one until each has had his or her say.   After "Solange" we have "The Cat, the Bailiff and the Skeleton," which hinges on the question of a real vs. imagined haunting; "The Tombs of Saint-Denis" an incredibly creepy tale that starts in 1793 and is based on a real-life event which occurred during The Terror, followed by  "L'Artifaille," inspired by the priest's belief that

Up next is "The Bracelet of Hair," but mum's the word on this one; finally we have the story that for me was the proverbial jewel in the crown here, "The Carpathian Mountains."  Long before Stoker brought his Dracula into the world, Dumas gave us this story which has much more of an old-world flavor, a tale of two brothers vying for the attentions of a young woman, in as Wheatly says in his introduction to The Horror at Fontenay, "a castle deep in the forests of Central Europe."  This one is so atmospheric that every time their mother said "Kostaki loves Hedwige," I felt a shiver go up my spine -- with good reason.

While I can't really divulge much about the contents in this book, I will say that stories here speak to translator Andrew Brown's question of whether the dead are "really dead."  They all examine to some degree the idea of consciousness continuing to live on after death, continuing the debate which began back in the 1790s when death by guillotine was in its heyday.  There's much, much more going on here, of course, and I could talk about this book for hours -- that's how good it is.

sidebar:  [Aside from the article linked in that paragraph, there's another good one of particular interest here.]

One Thousand and One Ghosts really is the perfect stormy-night read, and to those readers who disliked it because it wasn't "swashbuckling" or anything like The Count of Monte Cristo,  well, it obviously wasn't meant to be.

One goodreads reader says about this book that


"It might have been sort of freaky for the time it was written, but with mass media we are so inundated with macabre stories, this book almost seems like a bedtime story by comparison..."

which I think is a truly sad commentary on older supernatural fiction in general.  Don't be fooled -- Dumas has written something great here.
Posted by NancyO at 9:37 AM