HR #4: Hasty for the Dark: Selected Horrors, by Adam Nevill 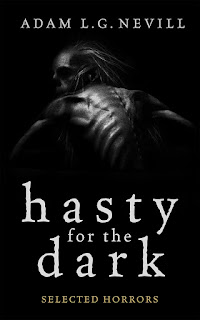 It is absolutely no secret that I'm a huge fangirl where Adam Nevill's books are concerned.  He is hands down one of the best authors of modern horror writing today.  There are several reasons why this is so, but I've narrowed it down to three big ones:

1.  While reading his books, the real world just dissolves so that there's absolutely nothing between me and what's happening in what I'm reading at the time. I think I mentioned some time ago that while reading his No One Gets Out Alive I was so into that story that a mundane thing like the phone ringing  made me jump completely out of my skin; I honestly believe that it's his ability to not only transport me so completely  into the world inhabited by his characters but to keep me there for so long  that makes up part of his horror-writing genius.

2.   Another part of the equation is that he is so very good at transforming inner anxieties into the most horrific and threatening situations.

3.  Nevill is a master of atmosphere who can turn an ordinary sense of dread into a feeling of downright stomach-churning horror where you just know that something terrible is coming, but by then it's too late, and you're locked in for the duration. On the other side of that coin is his ability to sustain that dread (and continuously ratchet up the gut-twisting tension)  throughout an entire novel, a feat that is extremely rare nowadays.

Now in Hasty for the Dark, he's upped his game, combining all three of these elements that make him a great modern horror writer with his own form of "tribute" to various writers, who, as he says, have inspired his own writing.  The result is one hell of a collection of nightmares that I'm glad I read in the daytime, since had I read it at night I probably wouldn't have slept.

After a debate in my head as to whether or not I should give a brief preview of what's in this book, I decided to do my normal no-spoiler annotations on these stories, so if you want to leave without knowing anything at all, now is the time. 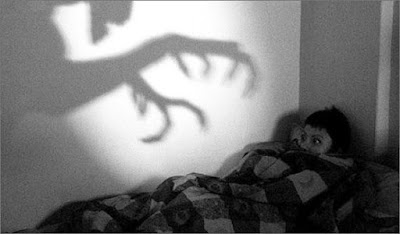 "On All London Underground Lines" opens this book, and is a story which conjures up the horrors of a broken lifeline upon which so many people are dependent. And then, of course,  there are fellow travelers and the crowd to take into account... "Angels of London" is in a word, unsettling, and really gets to the heart of the question of exactly what people with very limited options will put up with and rationalize as "normal" when they absolutely have to. Here one man makes a stand and decides to make a change or two in the system.  "Always in Our Hearts" finds a taxi driver who after a series of strange fares,  eventually learns not only that "Life is full of repetition" and that the "same bad things keep happening,"  but in the end, a payment must always be made...  Next up comes one of my favorite tales in this book, "Eumenides (The Benevolent Ones)." It is one of the most complex stories of the collection, highly enigmatic, and disturbing as well.  After a man moves to Sullet-upon-Trent, which makes him think of himself as

"a caged ape, a primate dressed in a cheap suit, one abandoned in a narrow and littered cement enclosure, forever bereft of visitors..."

he meets a woman at work, asks her on a date, and she decides they should meet an old, abandoned zoo.   While I was reading this one I wrote down "Aickmanish," so you can imagine my joy when reading at the end of the book that the author had written this story "in homage to Robert Aickman."   Seriously one of the best stories here, especially because of the introduction of the Sisters of the White Cross.

"The Days of Our Lives" follows next, another truly disconcerting tale that follows a couple who meet completely by accident. This one is beyond dark, and to give it the label of surreal is not a stretch by any means.  Oh my god -- it was one of those stories where I wanted out quickly, but discovered I was stuck, come what may.  It also introduces a bizarre, grotesque cult called The Movement, much to my great delight. Oh, please write a book about them, please!!    Next comes the story that made me push aside the breakfast I was eating while reading it, "Hippocampus," which is unique since there are absolutely no people involved.  An abandoned ship is the setting here, and it just may be the most frightening tale in the entire book. Of this one Nevill writes that it shows


"the reader a form of found footage: footage of a place where something terrible has happened."

He's not joking when he uses the word "terrible," so consider yourself warned. After the horror of that one, it was time to move on to a story that takes on highly-recognizable Lovecraftian tones in a mix of horror and science fiction, "Call the Name." The unease is not just due to the horrific future envisioned here, but also because reality just may be somewhat skewed in this case.  Next up is one that reminded me of the work of Thomas Ligotti, but which is actually an homage to the work of Mark Samuels, "White Light, White Heat."   Shame on me -- I've had his The White Hands and Other Weird Tales on my Kindle for over a year now and still haven't read it. Memo to self.   This story takes place in a publishing house, where the workers live in fear of the dreaded "white envelope."  As the author notes, anyone who's been an employee at a large company will completely understand where he's coming from here, but just to whet your appetite,  his main character says at one point that "Sadists and sociopaths had completely enslaved us and removed any chance of inner or spiritual life." Now imagine that idea with a Nevill touch and you've got an incredible story here.    Last but by no means least is his homage to Ramsey Campbell, "Little Black Lamb," which also ties to an earlier story in this book -- I'll leave it to you to figure out how.   A man is bombarded with memories which "repeated like radio commercials" but yet can't actually recall anything of the kind actually happening to him, and when he mentions it to his wife, her response is "That is so strange...Me too."  What follows is absolutely bizarre, moving quickly and deeply into the realm of horror before getting even worse.

By the time I'd finished the last story in this book, I was simultaneously  a) relieved that I could breathe again and b) sad that it was all over.

As I will remind people once again, I'm  not a reviewer at all, just a plain-old reader person, so I'll let the real reviewers discuss prose, style, and all that jazz.  I'll just say that Hasty for the Dark is the creepiest, best book of modern horror fiction that I've read all year, and you need to trust me here since I am an extremely picky reader in this genre and I do not give out superlatives lightly.  How he will top this one I have no clue -- it's that good.

I'm very grateful to Adam Nevill for my copy of this book which I would have bought anyway, but thank you all the same.