The Other Side, by Alfred Kubin -- prepare to be disturbed 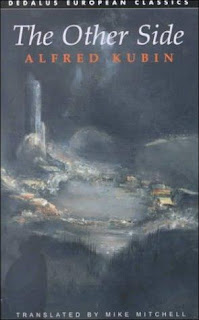 Imagine this: one very ordinary day, you're sitting at home and suddenly a man appears at your door with a proposal that, should you accept, will change your life completely.   That's exactly how this very disturbing novel begins.  How it ends I won't say, but imagine any  dream you've ever had that starts out being sort of quirky and then rapidly devolves into a nightmare from which you struggle to awaken, and that describes this novel in a nutshell.  Sort of.

Alfred Kubin is famous for his art, which in illustration form has also graced the pages of many writers' works, including Gogol, Dostoyevsky, Poe, and Nerval. While there are a number of places anyone can turn to to look at his work, it's obvious that Kubin was no ordinary artist.  As author Jeff VanderMeer has stated, Kubin "allowed his subconscious to lead his creative expression," and  Karen Rosenberg wrote in a 2008 article in the New York Times that "Kubin's drawings map the shadowy corners of the unconscious,"  and I can say that the same is definitely true regarding The Other Side. This is no ordinary book by any stretch of the imagination.

In Kubin's 1917 autobiography (with the great title Alfred Kubin's Autobiography)  he says the following:


"The scraps of memory -- that is all they are -- that stay with us after a dream seem illogical only to superficial observers, on whom the splendid power and beauty of this kingdom are lost." (xli)

This quotation works perfectly as an introduction to his novel The Other Side, in which the unnamed narrator of this tale finds himself living in a strange place known as "The Dream Realm."  Indeed, those who are accepted into the Dream Realm are "predestined to do so, either by birth or later experiences," and there is a "strict selection process for people who are invited to take part in our community."   The inhabitants have "abnormally sharp sense perceptions," which allow them to experience "relationships in the outside world which do not exist for the average person;" and it is these "non-existent things" which "form the unfathomable foundation of the world which the Dream people never forget for one moment."

The Dream Realm is the creation of the narrator's old school friend  Claus Patera, whom he hasn't seen in sixty years or so.  They had been "wild hooligans" together, but eventually they'd lost touch. Now, after a marriage and a career as an "artist and illustrator," the narrator is handed a note from Patera's agent inviting him to come and live in Patera's country.  Patera, it seems, had been fortunate enough to have come into "possession of what is probably the largest fortune in the world," with access to "fairly inexhaustible resources," which allowed to him to realize an idea he'd had to "found a dream realm," the present population of which was 65,000 people.  It is


"... shut off from the rest of the world by a surrounding wall and protected against any attack by strong fortifications. There is a single gate for entry and exit, facilitating strict control of people and goods. The Dream Realm is a sanctuary for all those who are unhappy with modern civilisation and contains everything necessary to cater for their bodily needs."

Patera's agent goes on to say that it hadn't been Patera's intention to "create a utopia, a kind of model state for of the future." Instead, it is a place, as the narrator and readers will discover, where the idea of progress is completely rejected.    Our narrator's first thought is that he's been confronted by a madman, but eventually he accepts Patera's invitation and he and his wife make their way to the Dream Realm, which lies hidden somewhere in Asia. The final step of the journey to the city of Pearl finds them entering a tunnel, in which the narrator was suddenly


"...assailed by a sensation of horror such as had never felt before"

and indeed,  what starts out as  an "adventure story," as the author refers to this book in his autobiography,  quickly turns into the stuff of nightmares.

While it takes them some time to get used to their new home and its quirks and the strange occurrences there, our narrator begins to gradually become  "so accustomed to the improbable that nothing seemed out of the ordinary."  What he also notices though is that while the eye of Patera (read the bureaucracy) is everywhere, he himself remains hidden and inapproachable, sort of echoing the experiences of K. in Kafka's The Castle.  [As a sidebar, according to a 2014 article in The New York Review of Books, Christopher Benfey notes that Kubin's book is "widely assumed (though on scant evidence)" to have influenced Kafka's work.]


Kubin  wrote The Other Side during a period in which he was unable to draw, a time which he says "filled me with alarm," and "in order to do something, no matter what, to unburden myself," he decided to write.  He finished this book in twelve weeks; within another four weeks he'd also illustrated it.  As he notes,


"During its composition I achieved the mature realization that it is not only in the bizarre, exalted, or comic moments of our existence that the highest values lie, but that the painful, the indifferent, and the incidental-commonplace contain these same mysteries,"

and that this is "the principle meaning of this book."  This idea plays out time and time again throughout the story, although I'll leave it to others to discover how.

I loved this book. It is so very different, so far out of the realm of normal; it is the very stuff I crave and go out of my way to look for.   It is extremely rare that I read a book that affects me like this one did,  but it did me in. When I find something out of the ordinary like The Other Side, I tend to get sucked in completely and have trouble getting out until the very last page. I wasn't too far in before the Moleskine notebook and the pens came out;  two notebooks later it was over. The first time through this novel I was shaken, my nerves were working overtime, and  I couldn't think straight for a while after having finished it. Being inside Kubin's head is a dangerous and very scary place to find oneself, even if it's only for the duration of the book.

Jeff VanderMeer (from the link above) says that this novel has a "cult status," and I can see why.  Reading it also validates my theory that there is most definitely greatness and wisdom to be found in a lot of what's old. Granted, this one is a tough and demanding read on several levels, but thinking people who really want to be stretched in their reading will most certainly appreciate this book, disturbing though it may be.

Ad Blankestijn has an excellent blog called Splendid Labyrinths, where there is a great discussion about how to possibly approach/read this book.