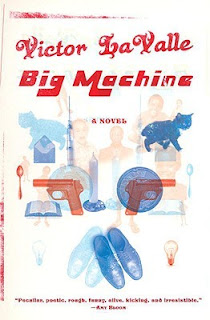 "To be an American is to be a believer!...But y'all don't even understand what you believe in."

Trying to make a concerted effort to read the books that have been sitting on my shelves forever, I decided to read this one, Big Machine, by Victor LaValle.  I've read his The Ecstatic, The Devil in Silver and The Ballad of Black Tom, and I have his newest offering, The Changeling, in a book bag reserved for vacation reading in August.  He has become one of my very favorite contemporary writers -- his work is original for sure, something I very much appreciate these days; he's funny, and he tackles important issues through his fiction.   Another thing about him that I like is that, at least in this book and in Devil in Silver, is that he has great stories to tell and frames them using horror-story tropes -- I recently read an interview where he had just published Devil in Silver and he called it his "haunted house story." I'm sorry -- I just don't remember where I read it. The point is that Victor LaValle is no ordinary writer, as anyone who's read his work will recognize.

In chapter three of this book, there is a bus passenger who is "three-quarters bum" standing in the aisle yelling at his fellow passengers, telling them that there's a fight going on in the country -- a fight about "faith, people. Faith and belief."  Before he gets booted off this bus, he has one final thing to say which is this:  "To be an American is to be a believer!...But y'all don't even understand what you believe in."  This one line sets up one of the most offbeat but finest novels I've read this year.

The main character in this novel is Ricky Rice, a janitor at Union Station in Utica New York.  The receipt of a strange note one day during his shift sends him off to an even stranger place deep in the northern Vermont woods. He ends up at a place called the Washburn Library, which "doesn't care who you were, only who you want to be." Like Ricky, the people he meets there have had problems in their pasts; they are also all "descendants of America's greatest losers. Black folks. The only population that came to America to be enslaved."  As he meets his fellow "Unlikely Scholars" for the first time, his first thought is this:

"Seven black people in the Northeast Kingdom. Sounds like the start of a gruesome old folktale."

And at this point, I knew this was not going to be any ordinary book, and it's only page 29.  As it turns out, I was right.


"There is a voice whispering in the darkness. I have heard it. Everything it says is true. It's been talking to us, to all of us, but the world is so noisy we can't make out the message. Not unless we go off somewhere, someplace, remote and undisturbed and quiet..."

The job of the Unlikely Scholars? To listen.

It seems that the Washburn Library holds a vast "inventory" of "impossible events, documented, recorded, and even photographed until they seem to be more than just hearsay."   The Dean  reveals to Ricky the story of Judah Washburn, the original founder who had been a slave who "escaped bondage" in 1775.  Judah, it seems, had made his way to Northern California where he'd eventually "wandered off into the marshlands." It was there he first heard a voice coming from under ground, where the Voice once again spoke to him.  After some time, and after Judah had been struck blind, he was directed back above ground where he found a fortune in Spanish gold coins. Making his way to Vermont, over the next twenty-six years, he attended séances, and "knocked on the door of every 'haunted house,'" waiting for the Voice to speak to him again. But it never did.    As time passed, his daughter became an alcoholic, and he decided that she should take his place in the field, perhaps hoping that she'd feel a sense of purpose and that "a mission would defeat an addiction."  As she sent reports back home, he read everything, hoping that the Voice had hidden its "next commandment" within her reports.  This was the beginning of the Washburn Library.

The Dean also reveals to Ricky that he has a special mission for him -- it seems that the Washburn Library is "under threat" from one of its own who believes the Library is "corrupted," and that his job is to start all over.   It is Ricky's chance to "be brave" -- to find and take out the rogue "traitor" Solomon Clay.  Off he goes to California with another Unlikely Scholar named Adele, and it's here where our story actually begins, as they discover that Clay has taken on the role of "Father of the Despised," a modern-day prophet planning to organize the homeless into action.   Or maybe I should say that this is where our story takes off like a rocket.

What starts out sounding like a sort of Dan Brownish kind of thing quickly moves into, as one of the  book cover blurbs says,  a "mind-rattling mystery about doubt, faith, and the monsters we carry within us," and this story with its somewhat crazy premise gets serious really quickly. Reading through, there is a LOT  going on here as among other things, LaValle looks at race, religion and the institutions that often fail those who depend on them the most.  It is a very human story, and as one reader put it,


"...it's a book that makes outcasts its heroes, and reminds us how powerful it can be to get a helping hand."

I think that maybe the author is also saying that doubt isn't always a bad thing -- while it may be the "Big Machine" that "grinds up the delusions of men and women," it can also serve as an antidote to our penchant for blindly placing our faith in something  without questioning, rather than believing in ourselves or reaching out to others.

Big Machine, despite its rather strange but on the other hand optimistic ending, is a gorgeous novel and the bottom line is I loved it.  It may not be for everyone, and that's okay, but there was something about this book that really tugged at my insides, making it perfect for me.