something new in something old... Lonely Haunts, from Coachwhip Publications 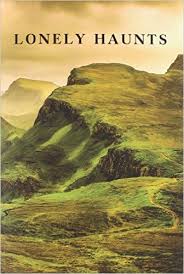 Technically I'm supposed to be reading Jim Thompson's The Killer Inside Me right now, but this long holiday weekend called for something floaty so I grabbed this book from  my shelves.   Fans of obscure or long-forgotten ghost-story writers will most certainly welcome this collection by Coachwhip, a "one-man publishing venture" with a lot of very cool titles. And damn the man -- the last few pages of this book are cover shots of other Coachwhip publications that I now feel compelled to buy, plus he has some interesting looking old mystery novels I want to pick up.   Aargh!

The only thing that would have made this book better would have been an introduction to the two authors, but I understand why there isn't one, at least in the case of Mrs. H.D. (Huskisson) Everett.   It's difficult to find out much about this woman  (1851-1923), who  between 1896 and 1920 published some twenty-two books under the name of Theo Douglas. The Encyclopedia of Fantasy of Science Fiction reveals that half of her books "had fantasy and supernatural content."  She wrote two Gothic novels for which she is most well known; one of these,  Iras,  is described (in part) at L.W. Currey as a


"Novel of magic and witchcraft and the raising of the dead. Young Egyptian woman is revived in England after seven centuries in a state of suspended animation in a priest's tomb at Luxor."

Another one for which she is known is her psychic vampire story Malevola (1914), with the "mysterious Madame Thérèse Despard," who is "able to draw into herself the beauty and vitality of another during the process of massage."  [Wait. I'm having a psychic moment myself here -- oooh weee ooooh --  I see myself curled up in a blanket reading both of these tales in 2017.]

On to Sir Thomas Graham Jackson (1835-1924), who is much more well known as a great architect. The blurb about Jackson in the Ash-Tree Press edition of his Six Ghost Stories (long out of print -- another reason to pick up this Coachwhip edition!) notes that he was


"celebrated in his day, as one of the foremost architects in England. His many commissions and restorations included extensive work at Oxford, Cambridge, and many English public schools, while his work at Winchester Cathedral between 1905 and 1912 almost certainly ensured that great church's survival to the present day."

He was also a "keen traveller and antiquarian, whose journeys took him throughout Britain and Europe," and later he would use his experiences in writing "several ghost stories for the amusement of family and friends... collected together in book form in 1919."  His biography can be found in several places online, so we'll leave off there. 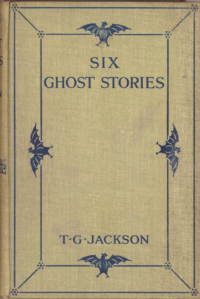 On to the book now, which is perfect for someone like me always on the lookout for obscure, forgotten writers and their works. First up,  Jackson's stories "were written in idle hours for the amusement of the home circle," as he says in the preface to his collection; he also notes that M.R. James (noted here as "the author of Ghost Stories of an Antiquary") lays down two conditions for a good story of the kind."  The first is that the "setting of the scene must be in ordinary life...so that one may say "This might happen now, and to me," and the second is "that the ghost must be malevolent," a rule that Jackson decided to "violate" in two of his stories.  I'll leave it to potential readers to discover which stories those are.  There are, of course, six tales here, the last four of which concern themselves with guilt, and  thus making for great ghostly reading

"The Lady of Rosemount," in which a houseguest ("a born antiquary") has a strange encounter in a an old chapel that replays in his dreams;
"The Ring" finds "la vecchia religione"  striking out for revenge when someone removes property from an old tomb;
"A Romance of the Picadilly Tube" is a tale of two brothers whose father's death and inheritance leads one down a path of temptation, with ghostly results;
"The Eve of St. John" is  a sort of mystery story from the past that finds its unknown ending played out in the present, and is my favorite story of the six;
"Pepina" finds a man in love facing disapproval by the brother of his beloved up until the day the brother dies and his troubles really begin; and finally
"The Red House," in which a murderer discovers that he's being haunted by a ghostly companion.

Obviously there's much more to those six tales but hey - if I say everything there is to say about them, well, then there's no point in anyone reading this book. And that would be a shame.

Onto the next part of this book, which is


There are so many well-crafted, creepifying tales here by Mrs. H.D. Everett that it's tough to pick a favorite. As the back-cover blurb notes, her tales are a mix of "...ghost stories, with family haunts, communication from the other side, malevolent curses, and more."  This is certainly true -- there is a good and varied selection of tales here that keep the reading fun without becoming too repetitious, which is always an issue in any ghost-story collection by a single author.  Some tend to follow along the same lines, but even so, they are definitely original in the telling.

Now that I'm thinking about it, three stories float to the top right away.   The title story, "The Death Mask," is just so flat out, unbelievably good that I could feel my eyes getting bigger while reading it, and I'm experiencing it nearly one hundred years after it was written. No spoilers or even the least bit of anything about this story here.  I also really enjoyed "The Next Heir," which finds Richard Quinton receiving news that he just might possibly be the heir to his second cousin's fortune and his estate.  As excited as he is about the whole thing, it's the conditions his second cousin places on the inheritance that are troubling.  This story is almost novella length, but the horror is sustained throughout. Another good one is "Nevill Nugent's Legacy," which is also the first of Everett's stories in this book to examine the changes and the trauma brought about by World War I, most notably from a female point of view.  Here Kenneth Campbell has returned from the war, which his wife notes had "made a great change in our circumstances," and if that wasn't bad enough, he'd come back "ill and broken." So when he is left a substantial legacy that can change their lives, the two are overjoyed ... until strange things begin to happen once they decide to visit their new property. It's a solid story of a gruesome haunting, sending those welcome frissons of horror up the spine.    The other stories are as follows:

"Parson Clench," a tale that takes place in a small, "deeply rural parish" where they say the people there "just begin to realise they are born when it is time for them to die, and that it takes at least as long to convince them they are dead."  And trust me, not everyone gets the hint that they've passed on in this story.   "The Wind of Dunowe" is set in an old Scottish castle, home to the MacIvors, who have a foolproof way of protecting what's theirs, as one guest will soon discover. "The Crimson Blind," also set in the Scottish highlands, starts out with two brothers deciding to pull a fast one over their cousin Robert in a house that is said to be haunted.  Years later  after acting as best man at his friend's wedding, Robert finds himself back at the house yet again, now the property of said friend. This time there's no suggestion of practical jokes when he starts having some weird visions.  Next up is "Fingers of a Hand," which is one of those stories I can't talk about so as not to wreck things, as is the case in "Anne's Little Ghost," another one which examines personal trauma and begs  the question of whether or not "some houses have a psychical atmosphere which can be variously moulded and used..."  These two little gems are followed by "Over the Wires," where a man seeking a family of Belgian refugees finally receives a call from their niece, who is also his fiancée. The problem is, however, that ... (!!!) The next one is "A Water Witch," where an overbearing sister is called on to help her brother who leaves his wife alone while he goes off on a shooting trip, and discovers why his wife was absolutely terrified at the thought of being alone.  It is sort of the same sort of tale as "Fingers of a Hand," so I will say no more, as is "A Girl in White."   "The Lonely Road" follows a man and his strange companion over eight miles as he walks a road at night where of late there have been a number of assaults and robberies.  "A Perplexing Case" is rather a unique tale that stands apart from all of the rest.  While it also has very much to do with postwar trauma, the story takes a bizarre turn that really is more science fictionish than ghostly, but certainly well worth the read. Finally, in "Beyond the Pale," we move to the American frontier where after some property is stolen, a woman decides to take back what is rightfully hers with some horrific consequences.

Overall, Lonely Haunts is a lovely, haunting, and seriously page-flipping collection, and even better, it's my introduction to  two more obscure writers, which is a major  big deal for me.  Not all of the stories reach greatness, but I'd be lying if I said that I wasn't creeped out most of the time and highly entertained by the entire book.  Anyone can read what's current or read tales from the past that are already very well known, but for me there's much more pleasure to be had in discovering forgotten writers and their stories that I never knew existed.

Coachwhip guy -- keep up the good work! I've read two Coachwhip collections now and have been blown away by both.  Highly recommended for that reader who wants something new in old ghostly fiction.